The art of analysis

ngrid Daubechies has been collecting information about artworks, trying to understand the differences between originals and copies

You wouldn’t think that art from the 14th century could be a subject for big data. But Duke professor of mathematics and of electrical and computer engineering Ingrid Daubechies has been collecting information about artworks, trying to understand the differences between originals and copies and how cracks and other degradations resulting from the aging process are distributed over the artwork. 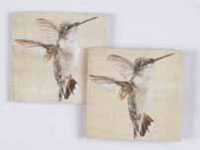 In her earlier work, she developed mathematical constructs called wavelets, which have informed image compression standards now widely used in image compression as .jpg2000s, and other digital formats. Now, she is working with the North Carolina Museum of Art and Dutch artist and art historian Charlotte Caspers to reconstruct a missing panel of an altarpiece by Francescuccio di Cecco Ghissi, an Italian painter from the 14th century.

The museum has three panels of the series of panels in its collection. Other panels are on display at the Metropolitan Museum of Art and other museums. But one panel is missing, so Caspers has researched and created a substitute in Ghissi’s style so that the full altarpiece can be put on display in 2015.

The math comes in as Caspers and Daubechies prepare the art for display, “aging” it with very precise placement of cracks and other dating details. They can study crack patterns and other processes on the older paintings, “learn” digitally how they affect the piece and then transpose that to the recreated piece, so the new art closely resembles its historic counterparts.

Daubechies can also use her mathematical tools to combine data from different imaging technologies and show hidden information. Many artists reuse canvases. Taking different kinds of images of a Van Gogh painting, Daubechies and her

collaborators uncovered details in a woman’s portrait over which the artist later painted blooming grasses.

In another study, they analyzed under-drawings, used by many of the best artists to begin their works. Comparing the style of the under-drawings with the finished surface of the painting, Daubechies says, can reveal more about an artist and what he or she was working on before producing a masterpiece, as she and her collaborators showed recently in their examination of paintings by 16th-century artist Goossen van der Weyden.