Catch a Wave and You’re Peering inside of the World 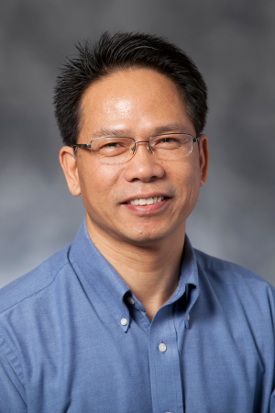 For the past two decades, Qing Huo Liu has been working at Duke Engineering to solve computational problems dealing with complex wave fields ranging from electromagnetic to seismic. With a proven method for analyzing these types of data, he has impacted numerous industries including electronics, airplanes and petroleum.

In a recent acknowledgement of his career, Liu was named the winner of the 2018 Institute of Electrical and Electronics Engineers (IEEE) Antennas and Propagation Society (APS) Harrington-Mittra Award in Computational Electromagnetics. Liu was cited for his “pioneering contributions to spectral and multiscale methods in computational electromagnetics, and to inverse scattering and imaging of complex media.”

Electromagnetic fields pervade the modern world around us. Every electrical system big and small creates its own field, which leads to a complex pattern of interactions. Most of the time these fields aren’t worth worrying about. But in some applications where the systems are extremely sensitive or close together, their details are absolutely crucial, and it’s Liu’s job to help model and understand them.

“If you want an aircraft to have a small signature from radar, you have to model how electromagnetic waves interact with the large structure,” said Liu, professor of electrical and computer engineering at Duke.

A classic approach to modeling an airplane’s electromagnetics is to break the problem down into small pieces, calculate the field inside each, and add them all back together. This approach, however, requires far too much computational power to perform efficiently. Liu’s contribution has been to develop “spectral” computational methods that take into account a better understanding of electromagnetic fields. This allows the model to use a larger grid, greatly reducing the complexity of the resulting calculations.

While this works well for large-scale problems, different mathematics is required for modeling smaller devices, such as the airplane’s antenna. For understanding how best to integrate tiny but critical components such as this, Liu has developed “multiscale” computational methods that manage to combine the different approaches needed for the different scales.

Liu has teamed with industry partners such as Intel on these issues to help optimize the electrical performance of integrated systems. It’s work that won him the 2011 IEEE Transactions on Components, Packaging and Manufacturing Technology Best Paper Award.

“That’s how I’ve formed my career. I’ve learned how to develop our methods and how to apply them to many different areas.”

“Mathematicians have been working on these sorts of problems for a long time,” said Liu. “It’s my job as an electrical engineer to figure out how to apply these approaches to systems such as electromagnetic fields.”

The utility of Liu’s approaches doesn’t end with electromagnetics. It can be applied to most any situation where waves can propagate—even the Earth’s crust.

“You can take measurements from the ground or inside of a borehole to image areas underground,” said Liu. “But it’s difficult because the media underground is even more complex than the human body.”

Speaking of the human body, Liu also works with microwaves, optics and ultrasound to help create medical images. While it’s a different type of math with its own challenges, Liu says the ideas behind the underlying algorithms remain the same.

“That’s how I’ve formed my career,” said Liu. “I’ve learned how to develop our methods and how to apply them to many different areas.”