Duke ECE’s Steven Cummer, the William H. Younger Distinguished Professor of Engineering, discusses new metamaterials research in this Q&A– and explains why invisibility paint is not on the horizon 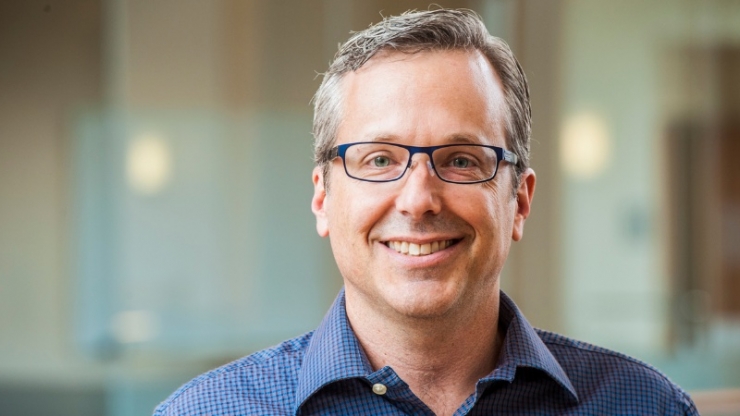 metamaterials (noun, plural): engineered structures that manipulate waves to “bend” light, sound and other kinds of waves in ways that produce effects outside of conventional physics.

Duke ECE faculty pioneered the field of metamaterials. Watch this video for a simple explanation of how metamaterials function:

For one thing, we have great breadth within Duke ECE. Between myself, David Smith, Willie Padilla, Natasha Litchinitser and Maiken Mikkelsen, we do just about everything—acoustics, radio frequencies, optical, terahertz. And we’re all doing that, to some extent, in an applied way.

Another factor is the presence of so many strong collaborators in the department and the school. For example, we recently had an idea for a new way of controlling ultrasound waves, and we needed a transistor-like structure that we could print on top of a specific kind of crystal. In that case I was able to walk down the hall and ask someone with exactly that expertise in non-traditional transistor-like structures (Duke ECE professor Aaron Franklin) for his thoughts.

I think that’s true across all the metamaterials work going on here at Duke. It’s easy to find an expert to fold into the space you want to work in.

2. What work is happening in your lab right now that you’re excited about?

One really exciting collaboration we have is with Duke MEMS professor Tony Huang, who is an expert in acoustic tweezers. Acoustic tweezers use ultrasound waves to push small particles through fluids. They can move the particles toward a target, spin them, hold them in place, or separate one kind of particle from another.

One approach that Tony has taken to control these particles is to load a chip with a lot of ultrasound transducers that generate waves at different points to push the particles around. Another approach—this is where my own research comes in—is to create the waves on the outside of the chip but then use passive metamaterial structures to perform the wave control function.

The size of the structure must match the wavelength of the wave that it’s trying to control. Audio frequencies are large, so the structures that control them can be large. Ultrasound wavelengths are measured in millimeters, so the corresponding controlling structures are only hundreds of microns across. So, we’re learning to scale down from our prior work. We’ve been experimenting with using 3D printed molds to cast very small structures made of silicone polymer, which is a material that works well in water and allows ultrasound waves to travel through it.

3. What are the big research challenges in metamaterials right now, in your opinion?

There are all kinds of great ideas that work… partly. If you review the last 20 years of metamaterials work, you’ll see there have been a ton of really interesting theoretical ideas that have emerged, showing different ways of controlling waves that we didn’t appreciate before. Negative refraction, cloaking, acoustic cloaking… These ideas are all amazing theoretically, but they all have limits as far as practical implementation. You can’t make a cloaking shell for a large object that’s super thin, for example. The shell needs to be thick enough to capture and redirect the wave energy to where it needs to go to render the object effectively invisible. That just can’t be done with a shell that is much, much thinner than the object being hidden.

wave (noun): the disturbance that transfers energy from one place to another place.

"Finding practical design problems that metamaterials and metamaterial ideas can help solve is the most interesting thing about the field."

So, to me, finding practical design problems that metamaterials and metamaterial ideas can help solve is the most interesting thing about the field. It’s hard to do that—people read popular articles about metamaterials that lead them to believe we can cloak anything, with anything. A potential collaborator might ask us, for example, if we can develop a paint that’s two nanometers thick and will make a building invisible. And the answer is no—they cannot have that! There’s sometimes some back-and-forth between what’s desired and what’s possible. And if we’re lucky, there’s something in the middle that’s a significant improvement on existing technology.

4. Are there opportunities to participate in metamaterials research at Duke at the undergraduate level? If so, what kind of background is necessary?

As far as background, what’s helpful is an interest in the physics of waves. You can of course be interested in other things as well, but if you hate physics, then metamaterials is probably not a great space to be in, at least on the theory side. That said, there are parts of the research that are not strictly related to metamaterials, but more about developing relevant components that help support metamaterials research. For example, students interested in 3D printing and exploring the limits of the smallest structures that can be reliably made, might be a good fit for my lab—that would be super helpful skill for us to have.

5. What about at the graduate level—what makes a successful student?

Many of the graduate students I have in my lab working in acoustic metamaterials have backgrounds in acoustics, and those working in electromagnetic metamaterials have backgrounds in electromagnetics and antennas. But as an undergraduate you really only scratch the surface of metamaterials anyway, so the depth of your technical background isn’t critical. It’s more about motivation. What is it you really like to do? What scientific papers do you really enjoy reading on your own—what resonates? When interviewing students who might be interested in joining my group, I try to figure out whether we’re interested in solving the same kinds of problems.

When I look back at the graduate students who have passed through my group, I’m happiest when there’s been a signature paper published that we’re both proud of. If there’s been a new contribution to the field, if people have paid attention, and if you, the student, did most of the heavy lifting so that you can call it your own, I call that a success.