NAI Senior Members are active faculty, scientists and administrators who have demonstrated remarkable innovation producing technologies that have brought, or aspire to bring, real impact on the welfare of society 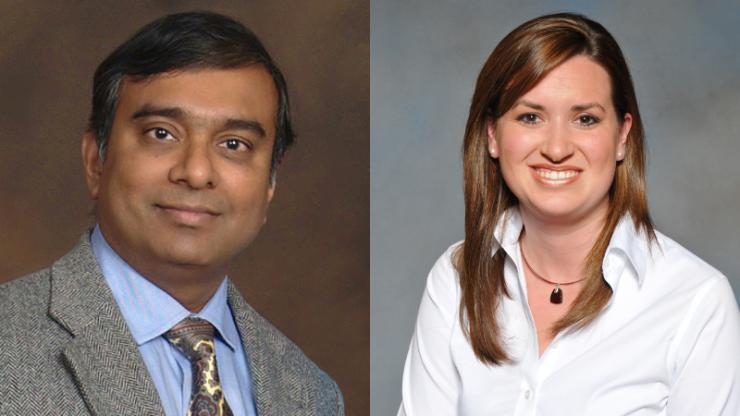 Krishnendu Chakrabarty, the John Cocke Distinguished Professor and Chair of the Department of Electrical and Computer Engineering at Duke University, and Amanda Randles, the Alfred Winborne and Victoria Stover Mordecai Assistant Professor of Biomedical Sciences at Duke University, have been named Senior Members of the National Academy of Inventors (NAI) along with 52 of their academic peers in the Spring 2019 class.

NAI Senior Members are active faculty, scientists and administrators from its Member Institutions who have demonstrated remarkable innovation producing technologies that have brought, or aspire to bring, real impact on the welfare of society. They also have proven success in patents, licensing and commercialization. An individual's nomination for the NAI Senior Member class by its supporting institution is a distinct honor and a significant way for the organization to publicly recognize its innovators on a national level. At their host institutions, Senior Members will continue to foster a spirit of innovation, while educating and mentoring the next generation of inventors.

This latest class of NAI Senior Members represents 32 research universities and government and non-profit research institutes. They are named inventors on over 860 issued U.S. patents.

"NAI Member Institutions support some of the most elite innovators on the horizon. With the NAI Senior Member award distinction, we are recognizing innovators that are rising stars in their fields," said Paul R. Sanberg, NAI President. "This new class is joining a prolific group of academic visionaries already defining tomorrow."