From Chopsticks and Cardboard to Functioning Prototype 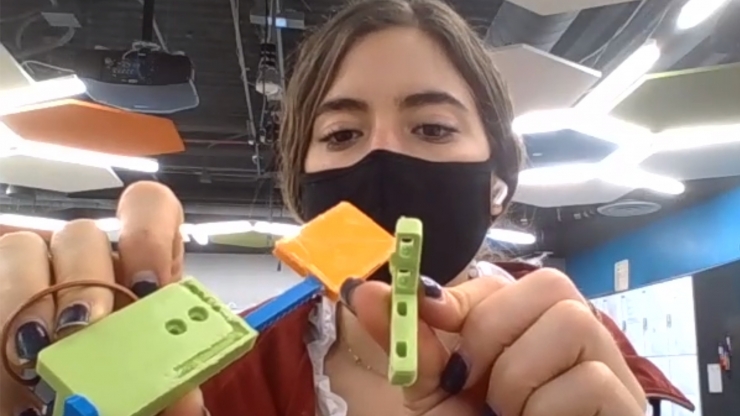 When first-year student Bryent Takayama received a care package from home, flush with packaged curry noodles and other delicious treats, he never guessed the food packaging would become part of a lo-fi product prototype for waste sampling—but weird times call for weird measures.

“We’ve made it work, given the circumstances,” Takayama said. “We’ve had to do a lot of figuring things out on our own—being creative, using whatever resources we have around us.”

Takayama, who plans to study electrical and computer engineering, and teammate Alina Suarez, a computer science major, are part of a Duke program called Bass Connections that supports interdisciplinary research teams as they work to address global problems. The two students are working on the effort to develop a Smart Sampling Toilet, a project led by electrical and computer engineer Sonia Grego, which aims to capture some of the health information that’s lost with the waste we flush away.

Suarez said she applied to Bass Connections from a desire for a deep research experience this year. “I was looking through the Bass Connections projects and this one really stood out to me. I have ulcerative colitis myself, which is a gastrointestinal disease,” she said. “All through high school I worked closely with the Crohn’s and Colitis Foundation of America, raising money and raising awareness of inflammatory bowel diseases. I thought this would be a cool way to continue my impact with this community—it’s a large and growing group of people that would benefit so greatly from this.”

To advance the project, Suarez and Takeyama worked on a device that can dispense Fecal Immunochemical Test (FIT) strips and expose them to human excreta. After the sample is collected on the strip, the device sends a signal to an integrated endoscopic camera, telling it to capture an image of the test results—one line if the sample is negative for biomarkers indicating possible gastrointestinal disease, and two lines if it is positive.

Takayama’s early curry noodle container-and-chopsticks prototype was the starting point for many further iterations on the design. “The most valuable thing I’ve learned is that even when you really think something you’ve designed is going to work, you have to test it,” said Suarez. “Sometimes you think it’s definitely going to work, you try it, and it totally fails. Every time we’ve tested our device we’ve found a new problem that we never would have been able to anticipate.”

One early idea—a spring-driven dispenser—sent the strips flying off course. (“Alina had the great idea of just flipping it over and letting gravity drive the process,” said Takayama. “Simplicity was the way to go.”)

But the device still needed a component to keep the test strip in place, so Suarez set up shop in the Innovation Co-Lab, 3D printing and an automated door that closes as a test strip develops and jumps open when the strip is ready to be discarded. Meanwhile, Takayama curtained the bottom bunk of his dorm room in blankets to test what lighting levels would be optimal for the endoscopic camera’s images.

Duke ECE professor and chair Krishnendu Chakrabarty, who is contributing his expertise in data analytics for image classification to this Bass Connections project, saw one virtual presentation from the team and was impressed not only with the progress the team had made, but also with Takayama’s resourcefulness. “Under his bed, Bryent had attached the endoscope with tape onto a water bottle that served as a stand, and angled it to have all the components within the field of vision. He had to crawl under the bed a few times to adjust the angle and setup and then add the buffer solution to begin testing. It was an amazing setup and demo,” said Chakrabarty. “After all, necessity is the mother of invention.”

For Takayama, the experience of collaborating with seasoned researchers in his first year of school was a memorable one. “As a freshman, I had very low expectations of being accepted into Bass Connections, and I was really grateful to become a part of the team,” he said. “We were urged to design something from zero—to make progress from nothing. And I got to collaborate with great students. It was really special.”