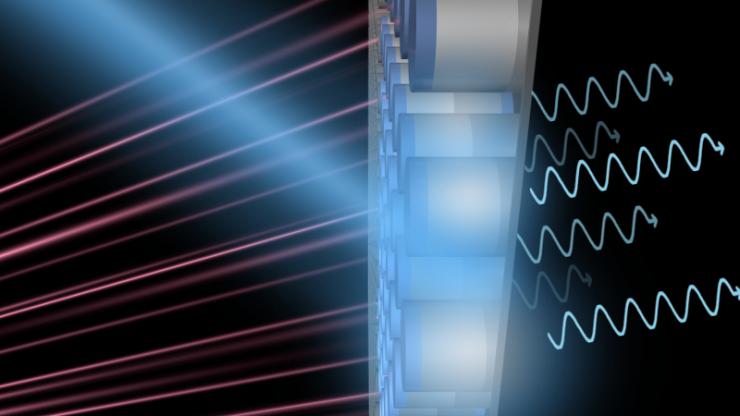 Artistic representation of the new metasurface technology. Rays of light (red) bombard the silicon cylinders, changing their electromagnetic properties to precisely tune how they interact with electromagnetic waves.

Researchers at Duke University have built the first metal-free, dynamically tunable metamaterial for controlling electromagnetic waves. The approach could form the basis for technologies ranging from improved security scanners to new types of visual displays.

The results appear on April 9 in the journal Advanced Materials.

A metamaterial is an artificial material that manipulates waves like light and sound through properties of its structure rather than its chemistry. Researchers can design these materials to have rare or unnatural properties, like the ability to absorb specific ranges of the electromagnetic spectrum or to bend light backward.

“These materials are made up of a grid of separate units that can be individually tuned,” said Willie Padilla, professor of electrical and computer engineering at Duke. “As a wave passes through the surface, the metamaterial can control the amplitude and phase at each location in the grid, which allows us to manipulate the wave in a lot of different ways.”

In the new technology, each grid location contains a tiny silicon cylinder just 50 microns tall and 120 microns wide, with the cylinders spaced 170 microns apart from one another. While silicon is not normally a conductive material, the researchers bombard the cylinders with a specific frequency of light in a process called photodoping. This imbues the typically insulating material with metallic properties by exciting electrons on the cylinders’ surfaces.

For this study, the cylinders were sized to interact with terahertz waves—a band of the electromagnetic spectrum that sits between microwaves and infrared light. Controlling this wavelength of light could improve broadband communications between satellites or lead to security technology that can easily scan through clothing. The approach could also be adapted to other bands of the electromagnetic spectrum—like infrared or visible light—simply by scaling the size of the cylinders.

“We’re demonstrating a new field where we can dynamically control each point of the metasurface by adjusting how they are being photodoped,” Padilla said. “We can create any type of pattern we want to, allowing us to create lenses or beam-steering devices, for example. And because they’re controlled by light beams, they can change very fast with very little power.” 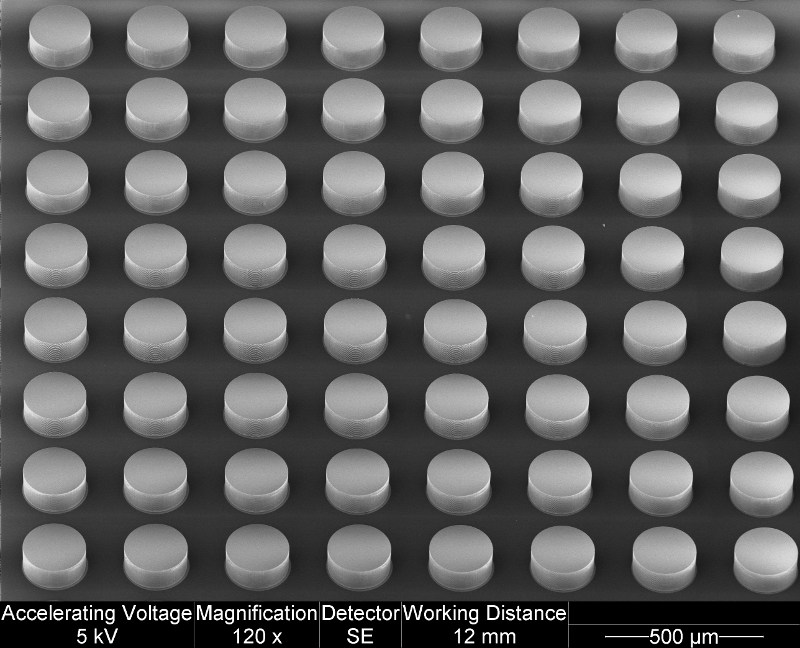 “This allows each cylinder to not only influence the incoming wave, but the interaction between neighboring cylinders,” said Kebin Fan, a research scientist in Padilla’s laboratory and first author of the paper. “This gives the metamaterial much more versatility, such as the ability to control waves traveling across the surface of the metamaterial rather than through it.”

“We’re more interested in the basic demonstration of the physics behind this technology, but it does have a few salient features that make it attractive for devices,” Padilla said.

“Because it is not made of metal, it won’t melt, which can be a problem for some applications,” he said. “It has subwavelength control, which gives you more freedom and versatility. It is also possible to reconfigure how the metamaterial affects incoming waves extremely quickly, which has our group planning to explore using it for dynamic holography.”

Learn more about metamaterials at https://stories.duke.edu/beyond-materials-from-invisibility-cloaks-to-satellite-communications