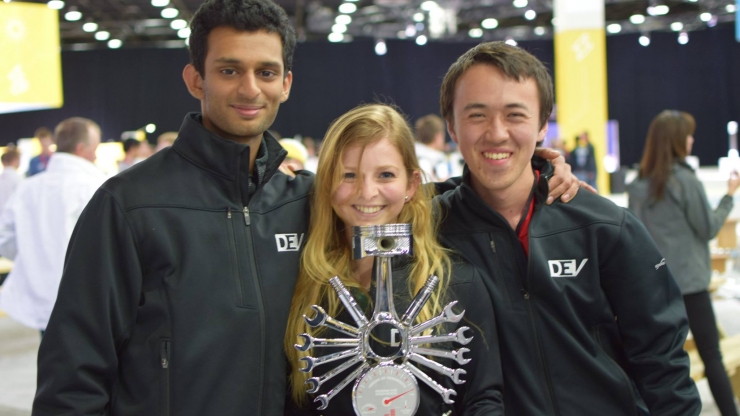 The team credited aerodynamic redesign and on-the-spot data analysis as the winning factors.

“We were able to see this data live, and make changes immediately—that made the difference,” said Grady, an electrical and computer engineering student. “Other teams simply didn’t have the advantage that data gave us.”

The pit crew used wirelessly connected laptops to track power spikes and immediately advise driver Caroline Ayanian, a mechanical engineering student, on how to regulate the throttle. Inside the vehicle, Ayanian had a display showing a simplified version of the data, such as how many watts of power she was drawing from the battery.

All that information made it possible to make the best possible decisions, optimizing the driving of the vehicle even as the weather worsened. The wind picked up, causing more drag, and the air temperature turned colder, a condition which can affect battery performance.

After each trial of the Eco-Marathon course, data was exported from the vehicle and subjected to further analysis and decision making in preparation for the next run. The team improved performance with each of five consecutive six-mile trials—a difficult and rare feat.

“Being able to harness this ordinarily complex data into simple and effective tips for our driver and pit crew allowed us to improve on each run,” said team member Ismail Iberkak, a mechanical engineering student. “We can definitely see an autonomous version of our vehicle in our future allowing for even greater efficiency improvements.”

The Duke team has performed well in recent Eco-Marathon competitions, posting third- and second-place finishes, but was committed to taking first this year. The team found ways to add to their telemetry and live data analysis by reducing the vehicle’s weight and introducing interchangeable parts, making design modifications easier and faster.

The team also created a relationship with efficient-car builders at James B. Dudley High School in Greensboro, NC, visiting the high school and hosting the next generation of engineers at Duke's garage in The Foundry, an innovative student maker-space in Gross Hall where students can build co-curricular and entrepreneurial projects.

“Around 90 percent of the car was made entirely by us,” said co-president Aniruddh Marellapudi, a biomedical engineering student. “Our attention to detail over the last year meant that every single aspect of the vehicle performed better this year. I am so proud of our entire team.”