The one- and two-year scholarships will cover the cost of tuition, fees, books, room and board up to a maximum of $7,500 per year

Duke engineering junior Kushal Seetharam has been selected as a scholar by the Barry M. Goldwater Scholarship and Excellence in Education Program. 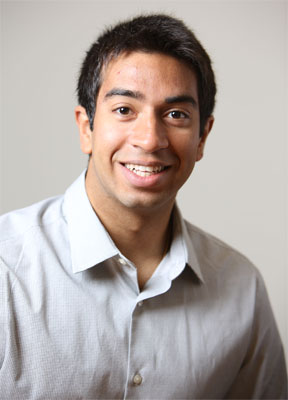 Seetharam is among 271 students awarded Goldwater Scholarships for the 2013-14 academic year. Fellow Duke junior Yaohua Xue, a chemistry and economics double major, also received a Goldwater Scholarship this year. The one- and two-year scholarships will cover the cost of tuition, fees, books, room and board up to a maximum of $7,500 per year.

The Goldwater Scholars were selected on the basis of academic merit from a national field of more than 1,100 mathematics, science and engineering students. The program honoring the late U.S. Sen. Barry Goldwater was designed to foster and encourage outstanding students to pursue careers in the fields of mathematics, the natural sciences and engineering.

Seetharam, an Angier B. Duke Scholar from Great Falls, Va., is a physics and electrical and computer engineering double major. He is also a 2014 NAE Grand Challenges Scholar and Boeing Grand Challenges K-12 Outreach Fellow at the Pratt School of Engineering at Duke. He intends to earn a Ph.D. in applied physics, and wants to conduct research in applications of electromagnetics and photonics.

Seetharam is currently working on a project to improve wireless energy transfer with metamaterials. His faculty advisor is engineering professor David R. Smith, director of Duke's Center for Metamaterials and Integrated Plasmonics.

"The field of metamaterials is one of the few where a project can span theory, simulation and experimental demonstration while remaining within an individual's ability to carry out," Seetharam said.

"On a personal level, I have always wanted to be an inventor across multiple fields. Modern improvements in digital technology have made scientific and technological development increasingly computational. Having the ability to develop computational techniques combined with a deep knowledge of physics will allow me the versatility necessary to work on a range of projects."

Seetharam intends to teach on the university level.

Since its first award in 1989, the foundation has bestowed more than 6,550 scholarships worth approximately $40 million. Sixty-two Duke students have received Goldwater Scholarships since 1995.