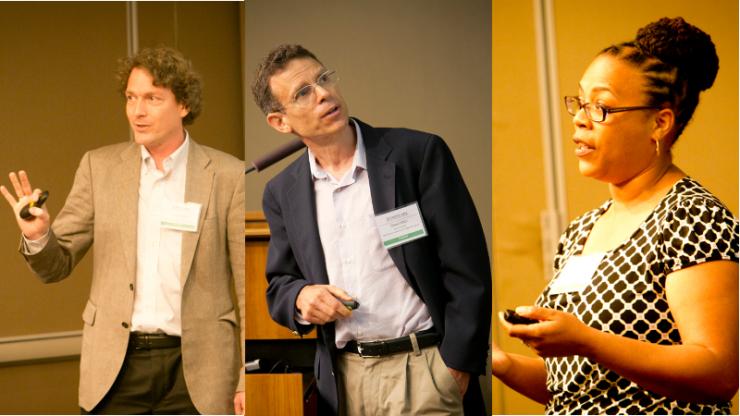 One specific class of HOIS called perovskites are materials that—with the right combination of elements—have a crystalline structure that makes them particularly well-suited for light-based applications. Their ability to absorb light and transfer its energy efficiently makes them a common target for researchers developing new types of solar cells, for example.

But those most familiar with perovskites believe that they—and the much broader category of HOIS—may be useful for a much wider range of applications. Backed by the Department of Energy (DOE), 16 of these researchers are banding together into the new Center for Hybrid Organic-Inorganic Semiconductors for Energy (CHOISE). Their goal is to better understand and control the emergent phenomena of spin, charge, and light/matter interactions in HOIS, potentially unlocking new energy technologies.

“NREL is the country’s flagship laboratory for renewable energy research. Not only will the research be incredibly interesting, this center will also provide opportunities for Duke faculty and students alike to connect with this valuable resource for energy research.”

“Perovskites have already shown success in the solar energy sector, and this center is a clear statement of their promise to change the paradigm for applications beyond that,” said David Mitzi, the Simon Family Professor of Mechanical Engineering and Materials Science at Duke University.  “For example, ‘spintronic’ devices, light-emitting devices and optical switching.”

The new center will have four thrust areas—one for each of three focus areas (controlling spin degrees of freedom, controlling light-matter interaction and harnessing charge carrier degrees of freedom—and another dedicated to crystalline HOIS design and synthesis, which underpins each of the other three. With almost three decades’ worth of experience working with hybrid perovskites, Mitzi will serve as a lead for the latter. Joining him from Duke are Adrienne Stiff-Roberts, professor of electrical and computer engineering, and Volker Blum, associate professor of mechanical engineering and materials science.

“NREL is the country’s flagship laboratory for renewable energy research,” said Mitzi. “Not only will the research be incredibly interesting, this center will also provide opportunities for Duke faculty and students alike to connect with this valuable resource for energy research.”