The Center's Scalable Quantum Computing Laboratory, or SQLab, aims to put quantum computers directly into the hands of users 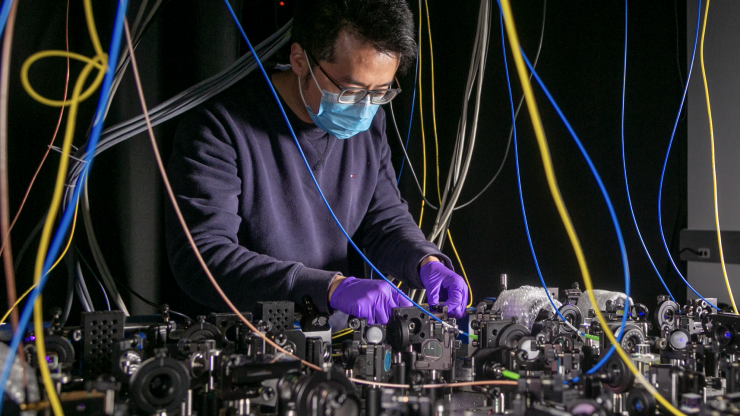 Lu Qi, an Electrical and Computer Engineering Postdoctoral Fellow in the Brown Lab works on a quantum computer setup

Construction is currently underway on a 10,000-square foot expansion of Duke’s existing quantum computing center in the Chesterfield Building, a former cigarette factory in downtown Durham. The new space will house what is envisioned to be a world-beating team of quantum computing scientists. The DQC, Duke Quantum Center, is expected to be online in March 2021 and is one of five new quantum research centers to be supported by a recently announced $115 million grant from the U.S. Department of Energy.

The Error-corrected Universal Reconfigurable Ion-trap Quantum Archetype, or EURIQA, is the first generation of an evolving line of quantum computers that will be available to users in Duke’s Scalable Quantum Computing Laboratory, or SQLab. The machine was built with funding from IARPA, the U.S. government’s Intelligence Advanced Research Projects Activity. The SQLab intends to offer programmable, reconfigurable quantum computing capability to engineers, physicists, chemists, mathematicians or anyone who comes forward with a complex optimization problem they’d like to try on a 20-qubit system.

Unlike the quantum systems that are now accessible in the cloud, the renamed Duke Quantum Archetype, DQA, will be customized for each research problem and users will have open access to its guts—a more academic approach to solving quantum riddles.