On November 4, Duke’s Pratt School of Engineering unveiled a new awards wall honoring the 23 alumni and faculty who have been elected to the National Academy of Engineering to date.

Election to the National Academy of Engineering is one of the highest professional honors accorded an engineer.

Founded in 1964, the National Academy of Engineering (NAE) is a private, independent, nonprofit institution that provides engineering leadership in service to the nation. The goal of the NAE is to promote the technological welfare of the nation by marshaling the expertise and insights of eminent members of the engineering profession. In addition to its role as advisor to the federal government, the NAE also conducts independent studies to examine important topics in engineering and technology. 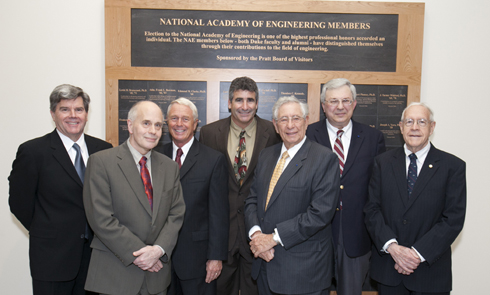 The NAE has more than 2,000 peer-elected members and foreign associates, senior professionals in business, academia, and government.  They provide the leadership and expertise for numerous projects focused on the relationships between engineering, technology, and the quality of life.

NAE Fellows have distinguished themselves in business and academic management, in technical positions, as university faculty, and as leaders in government and private engineering organizations.

Several of the Duke National Academy of Engineering members were present at the ceremony, including:

“These are very extraordinary people,” said engineering Dean Tom Katsouleas.  He also recognized some of the members who could not attend the ceremony.

Charles H. Townes received his Masters degree from Duke in 1936 in Physics.  He is an American Nobel Prize-winning physicist and educator. He is known for his work on the theory and application of the maser, on which he got the fundamental patent, and other work in quantum electronics connected with both maser and laser devices. He shared the Nobel Prize in Physics in 1964 with Nikolay Basov and Alexander Prokhorov.

John Cocke received his Bachelor's degree in Mechanical Engineering in 1946 and his Ph.D. in Mathematics in 1953.  He was a computer scientist recognized for his large contribution to computer architecture and optimizing compiler design. He is considered by many to be "the father of RISC architecture.” His idea was to use fewer instructions, but design chips that performed simple instructions very quickly.  Later, this approach became known as reduced instruction set computing (RISC).

And our very own Earl H. Dowell, who is Chair of the Department of Mechanical Engineering and Materials Science, and a former Dean of the Pratt School of Engineering at Duke. Earl was elected in 1993 for contributions to aeroelasticity and structural dynamics, which provide continuing insights into the behavior of complex structural systems.

“This wall of recognition was made possible through the support of Pratt’s Board of Visitors and the Faculty Development Committee members in particular, Seth Watkins, Bob Anderson, Tom Burger, Stefan Dyckerhoff, Dave Pratt, and Betsy Sechrest,” said Katsouleas.

“We have 23 Duke NAE members listed and hope to add many more people to this in the near future,” he said.