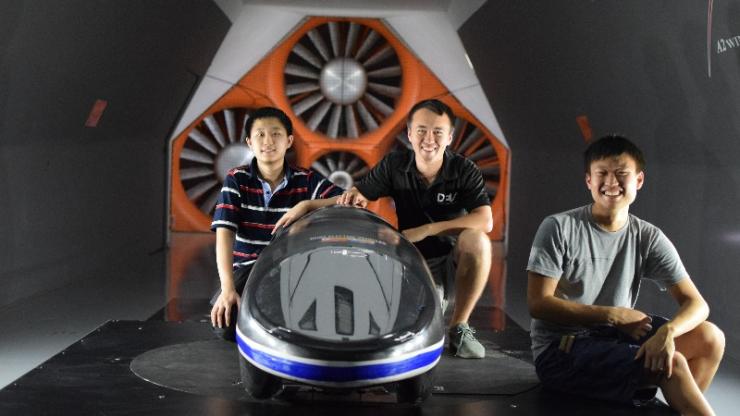 A vehicle built at Duke University has broken the Guinness World Record for electric vehicle efficiency, traveling 797 miles per kilowatt-hour, or 27,482 MPGe. The new record was confirmed by Guinness on July 9.

A vehicle built at Duke University has broken the Guinness World Record for electric vehicle efficiency, traveling 797 miles per kilowatt-hour, or 27,482 MPGe.

The successful run was completed at Galot Motorsports in Benson, NC. The Duke team unseated team TUfast from the Technical University of Munich for the win. Duke Electric Vehicles presidents Gerry Chen and Shomik Verma, along with recent graduates Patrick Grady ECE ’18 and Aniruddh Marellapudi BME ‘17 and mechanical engineering students Yukai Qian and Olga Suchankova, made up the world record-breaking team.

This is the second Guinness World Record for vehicle efficiency the team has broken in the past year. Last July, the student-run Duke Electric Vehicles (DEV) club achieved a new record for fuel efficiency with a hydrogen fuel cell car named Maxwell. That car also won the Shell Eco-marathon Americas competition in Sonoma that same year, as well as a technical innovation prize for its unique fuel cell design.

Chen, an electrical and computer engineering student, pointed out that while hydrogen fuel cell systems are notoriously finicky, electric battery technology is tried, true and predictable, so the team was able to focus almost exclusively on perfecting the vehicle’s aerodynamics over the past year. By improving aerodynamic performance by 39 percent, the team was able to capture the new world record.

Qian’s weekly consultations with computational fluid dynamics engineers at Altair, a global information technology company, enabled huge leaps forward in the design of the new car, which has a drag force of less than one Newton at the race speed of 6.7m/s, as measured in a full-scale wind tunnel.  For comparison, a Toyota Camry has a drag force of over twenty Newtons at the same speed.

“Breaking the record absolutely would not have been possible without Yukai’s aerodynamic improvements,” said Grady.

Working out of their space in The Foundry, a 7,600-foot makerspace for Duke student clubs, the team also sharpened the trailing edges (the rearmost part of front fairings and the tail), which made the production of the carbon fiber shell more difficult. The team again consulted with outside specialists, this time at VX Aerospace, who advised using a technique called resin infusion to ensure the vehicle’s smooth surface and accurate shape.

“Last but not least, we minimized the pressure changes of the air flowing under the car by making the leading edges slanted instead of vertical, and maximizing the space between the two front fairings,” said Qian.

Congratulations to all the students who developed the record-breaking vehicle:

Another important component of the vehicle’s design was its tires. According to Chen, competitors in the arena of concept-vehicle efficiency recognize that only one type of tire delivers the necessary performance a discontinued radial slick tire manufactured by Michelin specifically for the Shell Eco-marathon and known as a “black Michelin.”

As tire after tire blew out on the track, the team’s hoard of black Michelins dwindled.  To conserve the precious few remaining tires for competition, the team performed an informal experiment to see how much abuse the black Michelins could sustain before popping. They bought cheaper tires, overinflated them, and fitted them to ill-sized rims in an attempt to understand why they were losing so many—but the newer tires refused to pop.

“The DEV team is a great example of how Duke and the Pratt School of Engineering successfully cultivate an environment where talented engineering students can thrive, develop their own innovative solutions to energy problems, and ambitiously tackle global challenges."

The aging, petroleum-based rubber in the tires was simply beginning to degrade, the team suspected, and Chen predicted that soon, many tires stockpiled by teams around the world may no longer be viable.

“This was our window,” said Chen. “For any teams who want to try to overthrow our standing efficiency records—act fast, because the window may be closing.”

Duke Mechanical Engineering and Materials Science faculty member Nico Hotz, an energy technology expert, has advised DEV since 2018, and said that there’s more to the group than setting records. “The DEV team is a great example of how Duke and the Pratt School of Engineering successfully cultivate an environment where talented engineering students can thrive, develop their own innovative solutions to energy problems, and ambitiously tackle global challenges. An important part of this environment is Duke’s Energy Initiative, which connects and supports students, faculty, industry, and funding sources, to allow student teams like DEV to be successful—and even break world records.”