Former Duke football lettermen Clark Bulleit, Kevin Gehsmann, and Tim Skapek have been selected one of four finalists for the NFL 1st and Future innovations competition 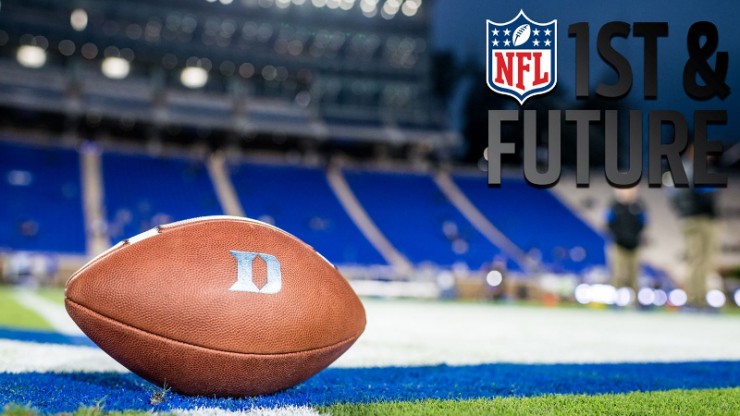 Founded by three Duke Engineer football players, startup company Protect3d has been selected as one of four finalists in the NFL 1st and Future innovations competition

The trio founded the company Protect3d, which revolutionizes athletic protection using 3D technology. The original concept started out as an engineering project for their then teammate and now New York Giants starting quarterback Daniel Jones when he went down with a fractured left clavicle. They used a 3D scan of Jones to obtain a digital model and created nine prototypes of the pad, optimizing his range of motion with the Duke athletic medicine staff. After making slight modifications, the final 3D pad was printed in structurally sound material.

Jones was back on the field just three weeks after his injury. He wore the custom pad for the remainder of the season, leading the Blue Devils to an 8-5 record and Independence Bowl victory over Temple.

Since then, Protect3d has made over 100 custom devices for student-athletes at seven schools.

During the program, NFL Commissioner Roger Goodell, Michelle Lee, VP of the Amazon ML Solutions Lab, and former NFL running back Curtis Martin will participate in a panel discussion on player health and safety innovation. The panel will be moderated by Dan Hellie of NFL Network, who will also emcee the competition.

NFL Network will livestream the full competition beginning at 10:30 a.m. The event will be available at https://www.nfl.com/videos/nfl-1st-and-future-2020-in-miami.

For more information on 1st and Future, visit https://www.nfl.com/causes/1st-and-future/.

Innovations to Advance Athlete Health and Safety Competition Finalists
Nextiles, Brooklyn, New York
Nextiles builds fabric-based sensors that when sewn into the interior padding of helmets can locate, triangulate and measure forces impacted on a player's head in order to quantify the factors that contribute to concussions and traumatic brain injuries.