During 2018 Commencement, Duke ECE students were recognized for outstanding contributions 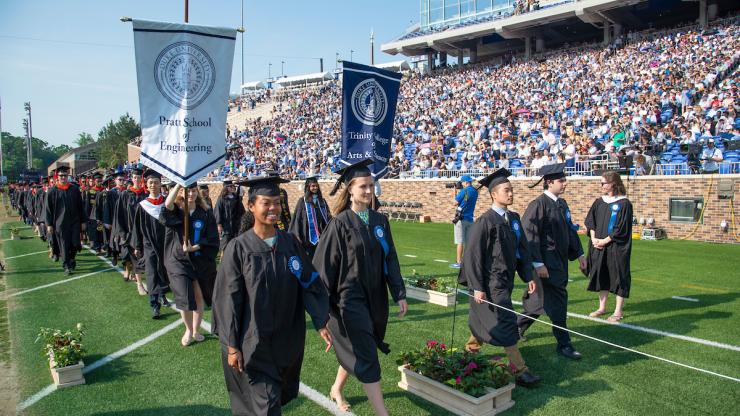 The Department of Electrical and Computer Engineering (ECE) at Duke conferred numerous awards and honors upon members of its graduating class during the 2018 commencement weekend, May 11-13. Award recipients were recognized for their exceptional contributions to scholarship, service and spirit.

“The ECE department is proud to recognize the accomplishments of our graduates through these awards,” said Professor of the Practice and Director of Undergraduate Studies Lisa Huettel. “Among a set of outstanding peers, these awardees stood out for their scholarship, independent research, service, and teaching.”

Duke Engineering recognized more than 600 undergraduate and graduate engineering students at a series of ceremonies and celebrations during the 2018 commencement weekend.

Joseph Robert Lilien, Adithya Raghunathan and Ryan Anthony St. Pierre were among the Pratt graduates awarded the Walter J. Seeley Scholastic Award, which is presented annually by the Engineering Student Government to members of the graduating class who have achieved the highest scholastic averages in all subjects, and who have shown diligence in pursuit of an engineering education. The award was initiated to honor the spirit of academic excellence and professional diligence demonstrated by the late Dean Walter J. Seeley.

Henry Pak-Hang Yuen was awarded the Otto Meier, Jr. Tau Beta Pi Award, which is presented in recognition of Dr. Meier’s leadership in establishing the North Carolina Gamma Chapter on January 10, 1948, and his continuous service until April 19, 1975, as chapter advisor. This award is given annually to the graduating Tau Beta Pi member who symbolized best the distinguished scholarship and exemplary character required for membership.

Jihane Bettahi and Edwin Taylor Bodge won the George Sherrerd III Memorial Award in Electrical and Computer Engineering, which is awarded annually to the senior(s) in Electrical and Computer Engineering who, in the opinion of the faculty, have attained the highest level of scholastic achievement in all subjects and simultaneously rendered significant service to the School of Engineering and the university at large. The award was established in 1958 by the parents of George Sherrerd III, a graduate of the Class of 1955, to recognize outstanding undergraduate scholarship.

Michael Yurievich Kuryshev won the Charles Rowe Vail Memorial Outstanding Undergraduate Teaching Award, established in 1997 by former students and colleagues of Charles Vail, a graduate of the class of 1937, professor from 1939-1967, and chair of the Department of Electrical Engineering from 1956-1964. The award recognizes the most outstanding undergraduate teaching assistant in the Department of Electrical and Computer Engineering.

James Louis Doherty and Aditya Srinivasan were awarded the Charles Ernest Seager Memorial Award, which recognizes the most outstanding undergraduate research project and presentation as judged by the faculty in Electrical and Computer Engineering, as part of the Graduation with Departmental Distinction presentation session. The award was established in 1958 by the widow and friends of Charles Ernest Seager, a graduate of the Class of 1955.

Five students in total were awarded Graduation with Departmental Distinction; read more about their work here.

Duke Engineering recognized more than 600 undergraduate and graduate engineering students at a series of ceremonies and celebrations during the 2018 commencement weekend.