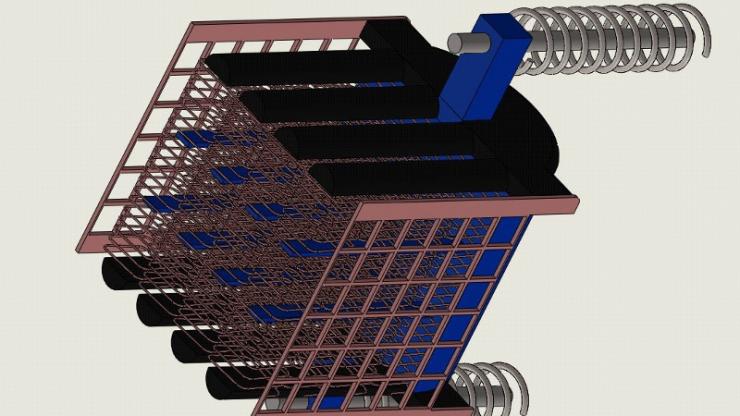 A schematic for a prototype of the proposed water cloaking device. It consists of wires and coils that create an electromagnetic field that acts on dissolved ions to move water around the object.

Researchers have developed a water cloaking concept based on electromagnetic forces that could eliminate an object’s wake, greatly reducing its drag while simultaneously helping it avoid detection.

The idea originated at Duke University in 2011 when researchers outlined the general concept. By matching the acceleration of the surrounding water to an object’s movement, it would theoretically be possible to greatly increase its propulsion efficiency while leaving the surrounding sea undisturbed. The theory was an extension of the group’s pioneering work in metamaterials, where a material’s structure, rather than its chemistry, creates desired properties.

Six years later, Yaroslav Urzhumov, adjunct assistant professor of electrical and computer engineering at Duke, has updated the theory by detailing a potential approach. But rather than using a complex system of very small pumps as originally speculated, Urzhumov is turning to electromagnetic fields and the dense concentration of charged particles found in saltwater.

The study appears online in the journal Physical Review E on December 7, 2017.

“The original idea was so big that it enticed colleagues at the Naval Undersea Warfare Center to help us pursue it, even though they were incredibly skeptical,” said Urzhumov, who was among the researchers who worked on the original 2011 paper. “Since then, we have identified a path to materializing this seemingly impossible proposal.”

The crux of the issue being addressed is that water is a relatively viscous liquid that, when moved, likes to pull its surroundings along for the ride through shear forces. A fish feels much heavier being pulled through the water than lifted through open air because of all the water dragged along with it. 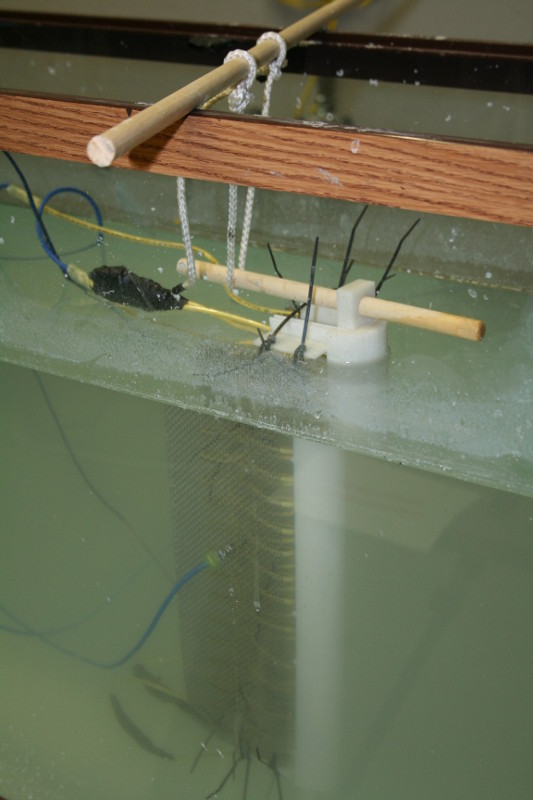 Besides essentially pulling extra water, drag can also be increased by how water flows around an object. A hydrodynamic object with fluid flowing smoothly along its surface creates much less drag than a blocky object that creates a mess of chaotic, turbulent flows in its wake.

The solution to these issues is to move the water out of the way. By accelerating the water around the object to match its speed, shear forces and turbulent flows can both be avoided.

“There are many ways to reduce wake and drag, like surrounding an object with low-friction bubbles, which is actually done with some naval torpedoes,” said Urzhumov. “But there’s only so much you can do if you’re just applying forces at the surface. This cloaking idea opens a new dimension to create forces around an underwater vessel or object, which is absolutely required to achieve full wake cancellation.”

Urzhumov originally envisioned a sort of truss-like frame enveloping an object with thin structures and tiny pumps to accelerate its flow as it passed through. But as time went by, he decided a more practical approach would be to use “magnetohydrodynamic” forces.

When a charged particle travels through an electromagnetic field, the field creates a force on the particle. Because ocean water is chock full of ions like sodium, potassium and magnesium, there are a lot of charged particles to push. The idea isn’t as crazy as it may sound—Japan built a prototype passenger ship in 1991 called the Yamato 1 using these forces as a means of propulsion, but found the approach was not more efficient than traditional propellers.

In the new paper, Urzhumov and his graduate student, Dean Culver, use fluid dynamics simulations to show how a water cloak might be achieved using this approach. By controlling the velocity and direction of the water surrounding a moving object, the simulations show such a system can match the water’s movement within the cloak to that of the surrounding sea.

This would make it appear that the water inside the cloak is completely stagnant in relation to the water outside of the cloak, eliminating the drag and wake. Of course, practical implementations aren’t perfect, so some drag and wake would remain in any realization of the device.

While the simulations used a cloaking shell half the width of the object itself, the calculations show the shell could theoretically be as thin as you wanted it to be. Another important result was that the forces inside the shell would not have to change directions as the object sped up, they would only need more power.

“That is one of the major achievements of this paper,” said Urzhumov. “If you don’t have to adjust the distribution of forces, you don’t need any electronic switches or other means of dynamic control. You can set the structure with a specific configuration and simply crank up the current as the object speeds up.”

Urzhumov says that for an actual ship or submarine to ever use such a device, it would need a nuclear reactor to power it, given the enormous energy requirements to cloak an object of that size. That does not mean, however, that a smaller diesel vessel could not power a smaller cloaking device to shield potentially vulnerable protrusions from detection.

Urzhumov also says that his theories and calculations have many potential applications outside of the ocean. Similar designs could be used to create a distributed ion propulsion system for spacecraft or to suppress plasma instabilities in prototypes for thermonuclear fusion reactors.

“I believe these ideas are going to flourish in several of these fields,” said Urzhumov. “It is a very exciting time.”

This research was supported by the Office of Naval Research through the Naval Undersea Research Program (N00014-13-1-0743) and the Multidisciplinary University Research Initiative (MURI) (N00014-13-1-0631).