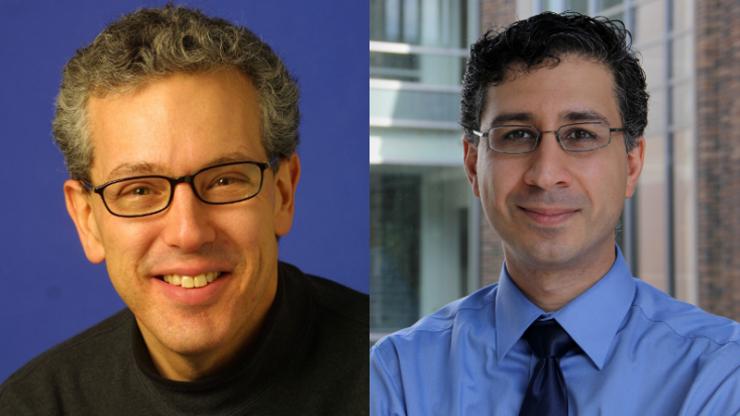 Sina Farsiu, the Paul Ruffin Scarborough Associate Professor of Engineering, and Jeffrey Krolik, professor of electrical and computer engineering, have been named fellows of the Institute of Electrical and Electronics Engineers (IEEE), the world's largest technical professional organization dedicated to advancing technology for the benefit of humanity.

Each year, following a rigorous evaluation procedure, the IEEE Fellow Committee recommends a select group of recipients for elevation to IEEE fellow. Less than 0.1 percent of voting members are selected annually for this honor.

With appointments in biomedical engineering, ophthalmology, electrical and computer engineering, and computer science, Farsiu was recognized for his “contributions to multi-frame super resolution and ophthalmic image processing.” Farsiu’s foundational contributions to the field of multi-frame super-resolution has been utilized in a variety of imaging systems from cell phone cameras to digital microscopes to capture high-quality images without the need to use expensive imaging hardware

On another front, for more than a decade at Duke, Farsiu has been a trail-blazer in introducing modern image processing and computation methods in the field of ophthalmic imaging. For example, Farsiu has helped produce the first portable adaptive optics scanning laser ophthalmoscopy (AOSLO) which can show researchers the neurons in the eye in vivo. He has also developed the first AI algorithm that can autonomously locate difficult-to-spot photoreceptors on AOSLO images.

Farsiu was the first to develop an AI system to automatically detect multiple diseases of the eye from optical coherence tomography (OCT) images of the retina. And in other recent work, he has developed AI algorithms that can that can tailor treatment to specific patients afflicted by diabetic macular edema—a leading cause of blindness in working-age Americans.

Having recently returned to Duke after spending five years as a program manager for the Defense Advanced Research Projects Agency (DARPA), Krolik was cited for “contributions to statistical signal and sensor array processing for radar and sonar.” His principal contributions in this field have been to improve data analysis methods for the detection and localization of moving objects (known as “targets”) using radio frequency and sound waves in complicated environments.

Radar and sonars traditionally work best when there is a single, line-of-sight path from the sensors to the target.  But when waves propagate along different paths (known as multipath), bending, reflecting, and/or scattering off objects on their way to and from a target, the problem of target detection and localization becomes much more challenging.   In his early work, he developed sensor array processing methods which exploits multipath in underwater ocean sound channels to improve passive sonar detection and localization of submarines, even when the details of the ocean environment are uncertain.

In later work, Krolik and his colleagues were among the first to develop multiple-input-multiple-output (MIMO) waveforms and processing for radar systems. Their application of MIMO radar was initially for over-the-horizon, high frequency radar, where they were able to mitigate multipath ground reflections that would have otherwise masked targets of interest. They also built a first-of-its-kind MIMO microwave radar which was used to develop signal processing for automotive and indoor target tracking applications.

In the last few years, this same form of MIMO radar has been implemented as a “radar-on-a-chip” by large semiconductor manufacturers at millimeter-wave frequencies. Although this exciting development is motivated by the burgeoning market for automotive radars, Krolik is already exploring the use of these MIMO radar chips in many other applications from health care to national security.