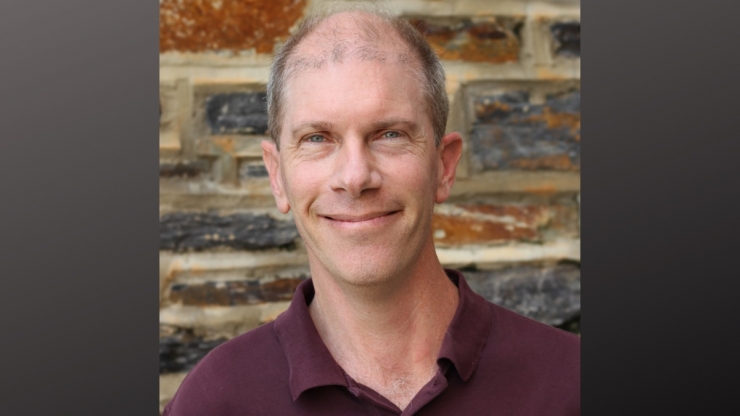 1. It’s been said that the ECE 250: Computer Architectures class you teach is quite difficult. Do you think that perception is true?

I think a lot of students psych themselves out, so I try hard in the first week to assure them that no one else in the class knows anything either...

It’s funny how many students will say, “I didn’t know anything about this topic coming in.” Well, of course you didn’t—it’s computer architecture! It’s not a standard thing to come across in undergraduate studies in the same way that programming is. I think a lot of students psych themselves out, so I try hard in the first week to assure them that no one else in the class knows anything either and that they’re going to be fine. This class has been taught for more than ten years now; we’ve got this.

At the end of the most recent semester, we asked the students to give one adjective to describe the course, and you might have thought they disliked it from the adjectives they chose: “challenging,” “difficult,” “brutal.” But evaluations were, in fact, very positive. They liked the course and they appreciated the efforts to keep it lively. They appreciated the connections. They regularly came to FLUNCH to discuss the class and ask questions about the field.

Duke has long had an institution of FLUNCH, in which students can take a faculty member out to lunch and charge it to Duke. This semester, obviously, that couldn’t happen, so we decided to try virtual lunches. I opened a Google doc to sign up and 30 people responded in the first ten minutes. There were around 150 by the end of the day. People showed up to ask questions or just to chat. We even had people show up from China at 1 a.m. local time. They just seem tickled to talk to their classmates after being apart for so long. I’m looking forward to FLUNCHing in person again very soon.

3. You always seem to have interesting collaborations in the works. Tell us about one or two of those projects.

I have a project happening with Robert Calderbank that started out fortuitously, with a PhD student of mine who was taking his class. Robert is the world’s foremost expert on encoding information, and the student started a project that applies to computer storage, which is something I work on.

In this project we used a type of code that’s common in Robert’s field but uncommon in mine, called coset coding, and applied it to a new type of storage technology. We found that we could greatly extend the lifetime of this type of storage by figuring out how to encode information so that we could write to it many more times before it fails. We’ve gotten a couple of NSF grants, and we’ve continued to find ways to encode information that improves reliability, lifetime, and vulnerability to transient errors. Sometimes when your computer fails and you get the Blue Screen of Death, it’s because of corruption in your storage or disk, so there are obvious wins if this technology gets adopted.

processor: the part of the computer that performs the computations. Other parts of a computer include memory, disk, networking, etc.

We’re also looking at ways to encode the information sent between processor cores so it’s less likely to get corrupted, and there’s lower likelihood of the signals interfering with each other to cause crosstalk.

Or let’s say we want to deploy an embedded system—a little sensor with a bit of processing power and some storage. A good example might be a piece of equipment you’re sending to space, like the Mars Rover. You deploy it but you can’t replace the battery or service it in any way. Wouldn’t it be nice if you could encode the information it collects so that it uses less energy on each write, and therefore lasts longer?

As an architect, I bring problems like these to Robert, he solves them in ways that are mathematically beautiful but potentially unbuildable, and we iterate until we get to something that is feasible and that works. It’s a very fun way to collaborate.

I’ve also been collaborating with faculty and students at the University of Edinburgh since 2018, when I was on sabbatical there. We began a project that remains ongoing, working to automate an aspect of computer design dealing with protocols, or the messages exchanged between cores. It’s a hugely complicated thing to get right, but we’ve managed it for simple protocols and now we’re working on more complicated system models, like smartphones, that use all different types of cores—cores that do general-purpose computing, cores that handle graphics, ones that process what’s happening with your camera.

protocol: a set of rules or procedures for transmitting data between electronic devices.

4. If students share your enthusiasm for computer architecture and want to dive deeper into the field, how should they proceed?

Coming out of ECE/CompSci 250, in which we design a computer and build a simulator of cache memory, students generally take one of two paths. Students who enjoy the hardware aspect of it tend to go to ECE/CompSci 350, Digital Systems, where you learn how to physically build a digital system like a computer. You can hold what you build in your hands and show it to your parents, which is very satisfying.

Then there’s ECE 552/CompSci 550, Advanced Computer Architecture, which dwells not so much in implementation as design. At the end of 250 you can make a computer and you understand how it works, but you would not be able to sell it. It would be a slow, single-core processor that is functionally correct. That’s a great place to be after only one semester, without a doubt. But by the end of 552, you’re at the bleeding edge of computer design. You’ll understand how the computer in your laptop works and you’ll be able to imagine what features a computer five or ten years from now might have.

Those are the next steps in terms of curriculum. But there are many other courses that fit tangentially. Architecture is just one piece of the stack—you’ve also got implementation, and then you’ve got people designing transistors, you’ve got solid-state physics, you’ve got the operating system…. I recommend students take Operating Systems (ECE 353) and Compilers (ECE 553) if they’re prepared for that challenge.

The strength of any program is in its people and the research they’re doing. The term “trustworthy computing” encompasses so many brilliant people doing innovative and wildly different things. It includes both hardware and software. It includes making sure designs are bug-free and resilient, and that they’re secure. Duke ECE has people at the very top of their fields in all those different aspects. It’s just a great team.

Once upon a time, I was an undergraduate here and I took Computer Architecture. I had the benefit of taking it from John Board, and it was a life-changing experience for me. Computer architecture, when it clicks, when you understand how computers work—it’s a defining moment. It’s why I’m here today.