How to Judge an AI Art Competition

It’s another case where an interdisciplinary approach works best 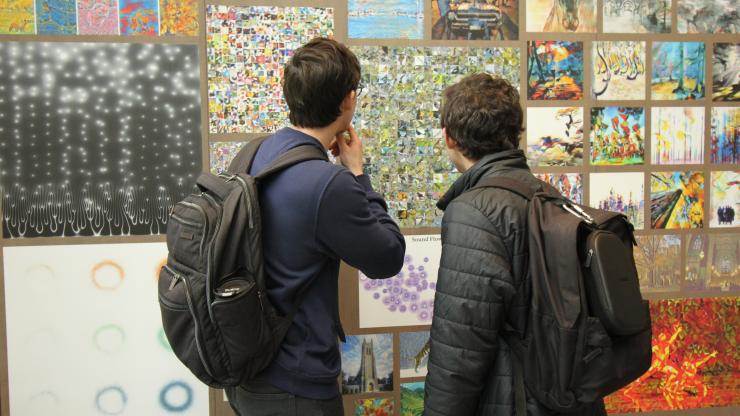 Some of the 24 entries in Duke University’s first +DataScience AI for Art Competition bore the indelible painterly fingerprints of the masters: Picasso, Cezanne.

Some were strange to the point of eliciting unease alongside excitement.  In one, a whale floated through a sea of irises; Van Gogh could have dreamed it. There were renderings of animals, which appeared realistic from afar, only to remain unresolved as one approached—their features smeared and squashed together like bread dough.

“Some of the images are quite comfortable, an impression made explicit by having things that are creepy in the same piece, or a piece right beside it,” said Scott Lindroth, vice provost for the arts for Duke and one of the event’s judges. “In a sense it shows the scope of possibilities the entrants were able to explore. I found that really gorgeous.”

How to actually judge that incredibly varied field of entries, and pull a winner from the spectrum?

But how to actually judge that incredibly varied field of entries, and pull a winner from the spectrum?

“We were really looking for pieces that were

very pleasing and also technically competent, which is certainly a tough feat to pull off in this space,” said Matthew Kenney, another judge. Kenney is an IT analyst at Duke who also teaches courses in interactive graphics for the university, and makes his own art using AI. He works with generative adversarial networks, or GANs, the kind of algorithm used to create works like those entered in the competition, and other AI applications like natural language processing, image recognition and deep learning. In other words, he was uniquely qualified to evaluate what was under the hood of each entry.

Creating AI art is challenging on many levels, said Kenney. Artists must fight “mode collapse,” the algorithm’s tendency to spit out the same image every time it processes a set of data.

Another challenge is the low level of certainty that the creator can expect from the end results. “Artistically, you maybe don’t have a strong sense of what is going to come out until you’ve trained the network,” said Kenney. “You can have a measure of certainty from the images you’re training it on, but at the end of the day you really don’t know how it will look until after the fact, which is certainly challenging but also exciting.” He said that with his own work, he might iterate eight or nine times before arriving at his desired results.

In judging Duke’s AI for Art Competition, Kenney said, each panelist entered into deliberations with a piece they had initially gravitated toward. After a series of discussions led by the judges with expertise in the arts, though, a consensus on the three strongest works emerged. It was only at that point that two electrical and computer engineering faculty members—Robert Calderbank, director of the Rhodes information initiative at Duke (iiD), and Lawrence Carin, vice provost for research and director of +DS—performed what Calderbank called “due diligence” to check the creators’ code.

“By investing in computer science and a computing way of thinking, we actually make all of the disciplines a little more successful.”

He pointed to iiD’s Data+ program as an example of how advanced computing tools and methods provide support to other fields. “Every summer in Data+ we have projects where students in the humanities and students in the hard sciences discover each other,” said Calderbank. “Humanities students discover tools that can take their intuition further, and scientists discover interesting new modes of questioning they’ve never considered before. There’s a kind of magic to that.”

Zach Monge, a PhD student of psychology and neuroscience, claimed the $5000 prize for first place at the competition’s reception at the Rubinstein Arts Center on Wednesday evening, and there was certainly magic in his work. His entry, titled “Abstract Forests,” was somehow evocative of both smoke and water, and ablaze with the colors of autumn. He produced the images using cycle GANs that transformed selected photographs of forests into abstract paintings, and back again.

“It’s creating a reconstruction,” said Monge. “This is a really big opportunity for people who are interested in art and are willing to learn the code. We’ll see what happens in the next few years.”

Read More about the Competition