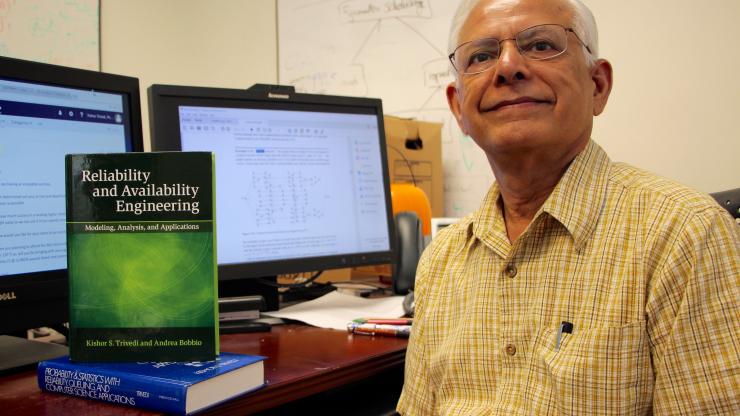 When Kishor Trivedi came to Duke University in 1975 as a newly hired faculty member, he was asked to teach a course on Probability for Computer Science and Engineering—the art of calculating the likelihood that a computer’s hardware or software system will perform as required and not break down too frequently.

The only problem was that he’d never taken a course on the subject himself.

That did not stop Trivedi, however, from diving headfirst into the literature and learning it on his own. But as he did, Trivedi noticed there was no existing textbook that covered the topic.

So he wrote his own.

Probability and Statistics with Reliability, Queuing and Computer Science Applications was published in 1982, followed by a full and complete revision in 2002 and a comprehensive manual containing 300 problem solutions soon after.

That textbook tackled a large swath of territory on a fairly basic level; its revision remains widely used today. After its success, Trivedi decided to delve even further into the subject, completing more advanced tomes on various aspects of the field—including, in August 2017, his fourth book, Reliability and Availability Engineering: Modeling, Analysis and Applications.

“I felt like we were never going to finish it for a while,” said Trivedi of the book that he began with coauthor Andrea Bobbio in 2002. “But as far as computer systems have advanced in the past 15 years, the methods used to predict their reliability don’t change as much.”

To identify potential problems in hardware and software, researchers break systems down into individual components and create probabilistic models that describe a large system consisting of many interacting components through a set of equations. They then work to solve those equations as efficiently as possible.

“The beauty of all this is when you try to apply these methods to real systems, you discover their difficulties,” said Trivedi, now the Hudson Professor of Electrical and Computer Engineering at Duke. “You have to find ways to solve these difficulties, implement the novel solutions into the tools and then apply the tools once again. That’s the cycle. And our tools are being used by many companies.”

Trivedi’s books teach this process by providing real-world problems to solve. One of his own most memorable came in the mid-2000s when he was asked to analyze the current return subsystem on the Boeing 787 Dreamliner.

The engineers had replaced the metal used in the airframe with composites, which meant they couldn’t simply tweak the old models to analyze it. They had to start from scratch and were having trouble using Trivedi’s tool—called SHARPE—to analyze the system.

Trivedi had an idea as to how they could solve the problem, so he sent one of his doctoral students to help. Four months later, an entirely new algorithm had been written to solve the equations. But that wasn’t good enough for the Federal Aviation Administration, which required that such tools used for the analysis follow a standard laid out in a 600-page document called D0178B.

“I’d never even heard of it, so we had solved the problem but we had not solved the problem,” said Trivedi. “So I dumped everything that was in my mind about what was done to ‘validate’ the tool SHARPE into a document detailing why my methods were sound and sent it to them. They finally approved it, and I, my graduate student and Boeing engineers patented the new algorithm.”

There are many other problems detailed in the books, which Trivedi is very proud of. But perhaps one of his proudest moments came from the hands of former students, friends and colleagues who authored a “festschrift” in honor of Trivedi’s 70th birthday. Titled Principles of Performance and Reliability Modeling and Evaluation, the work is a volume of essays on research into the performance and reliability aspects of dependable fault-tolerant systems.

“When I was new to Duke and just starting my academic career, I would travel to universities to give talks--and the first thing people would do, before anything else, was ask whether I knew Kishor Trivedi and then start praising him,” said Krishnendu Chakrabarty, chair of ECE at Duke. “I was so impressed that I told myself that one day I will be like Kishor. Such has been his influence on me!”

There has been an abundance of similar praise of Trivedi’s long and distinguished career at Duke University, which originally began in the Department of Computer Science in 1975. Then, in 1991, Trivedi made the move to the Department of Electrical and Computer Engineering, which he says has changed tremendously since that time.

“EE was more teaching-oriented and not as heavy into research at the time,” said Trivedi, who spent many years as chair of the department’s search committee for bringing in new faculty members. “Back then, my research used to bring in more support than the rest of the department combined. But now the department has doubled in size and my work is just a drop in the bucket.”

As for what’s next, Trivedi doesn’t have any plans on slowing down. He continues to add to the list of 46 doctoral students he has successfully mentored, many of whom go on to work at industry giants such as Boeing and IBM. And he’s still writing, now working with his coauthor on a solution manual for problems in his latest book.

“Hopefully it won’t take quite as long to finish as the last one,” said Trivedi. “But since I don’t type very fast, you never know.”