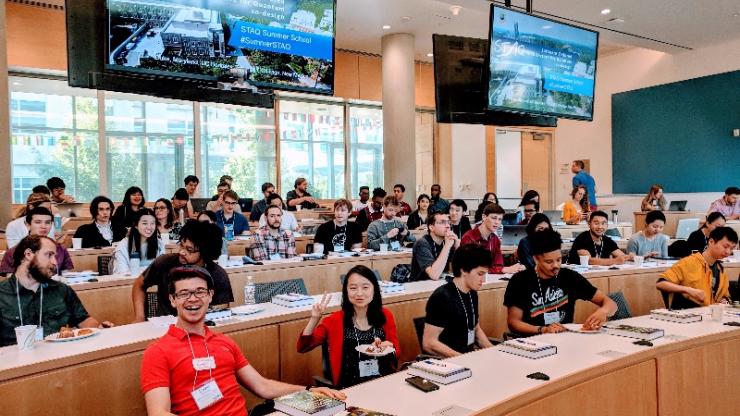 Over the course of a week at Duke University, participants in the Software-tailored Architectures for Quantum Co-design (STAQ) Summer School reviewed quantum computation basics, learned about advanced circuit models and trapped ion technology, and still managed to carve out time for a scavenger hunt in Duke Gardens.

The 75 participants represented more than 40 different institutions of higher education, government and industry. Lecturers from Duke, the University of Chicago, Tufts University, the University of New Mexico and IBM ensured that all summer schoolers came away with a deeper knowledge of the field of quantum computing, regardless of their level of experience.

“The goal of the summer school is to provide an introduction to students who are unfamiliar with quantum computation and to broaden the perspective of graduate students working in the field.”

“The goal of the summer school is to provide an introduction to students who are unfamiliar with quantum computation and to broaden the perspective of graduate students working in the field,” said electrical and computer engineering associate professor and STAQ director Kenneth Brown. The STAQ project and Summer School are supported by the National Science Foundation.

David Ariyibi, who just graduated from Williams College with a double major in mathematics and computer science, plans on applying to graduate school in the next few years. His advisor recommended exploring quantum computing and quantum information because of the field’s potential for growth—and its potential to attract funding.

“As I was considering his advice, I saw the application for the summer school in a department email, so I decided to apply,” said Ariyibi. “The lectures have given me a lot of perspective and insight into the field and how to continue learning after the program is over.  While there is still a lot for me to become familiar with, especially due to my lack of background in physics, I feel really grounded in what is possible and where I can see myself going forward.”

"I was excited to learn, especially from experts in these areas.”

Nicole Greene, a STAQ collaborator and a PhD student in physics at the University of California, Berkeley, came to the program with more knowledge than Ariyibi, but said she still learned a lot from her experience. “I've already had exposure to basic quantum information concepts, and also to the different platforms people use—trapped ions, super conducting qubits, et cetera,” said Greene. “I haven’t, however, taken any coursework in near-term algorithms like QAOA or error correction, so I was excited to learn, especially from experts in these areas.”

Program administrator Margo Ginsberg said that the number of applicants—300 of them—was both surprising and encouraging to the event’s organizers, who were able to scale the program up to accommodate 50 percent more participants than were originally planned for.

Duke plans to host a STAQ Summer School again next year with a similar introductory track and a new advanced track on noise and algorithms, said Brown. Registration is expected to open in January 2020, and those interested should watch STAQ's website for details.