The term “metamaterials” burst into the mainstream science news lexicon nearly 15 years ago when a Duke-led research team made the world’s first invisibility cloak. Unable to help themselves from drawing parallels to Harry Potter and Star Trek, the national media quickly caught onto the story and thrust the emerging field into the limelight.

A new field had been born.

Fast forward 15 years and Duke is now home to a burgeoning metamaterials group dedicated to various niches within the field, all connected through the Center for Metamaterials and Integrated Plasmonics.

And two of the group’s youngest members, Maiken Mikkelsen, the James N. and Elizabeth H. Barton Associate Professor of Electrical and Computer Engineering, and Natalia Litchinitser, professor of electrical and computer engineering, are manipulating some of the smallest waves to tackle some of the world’s biggest challenges from precision agriculture to breaking bandwidth limits.

“I was working in Bell Laboratories on different types of photonic crystal fibers for telecommunications when papers in this new field called metamaterials started emerging,” said Litchinitser, referring to the early papers that led to the microwave cloaking device media storm. “I was truly fascinated by entirely new regimes of electromagnetic wave propagation in these new engineered materials. I started looking into the theory of light-matter interactions in metamaterials, first as a side research project, and soon moved to the University of Michigan to pursue metamaterials research fulltime.”

“I started my PhD spending years studying single electron spins confined in nanostructures called quantum dots, which got me interested in controlling the behavior of light by designing and fabricating tiny structures,” said Mikkelsen. “I got deeply fascinated by how well-known materials behave in previously unimaginable ways when we design their surroundings, and in particular when we do this on a deeply subwavelength scale.” 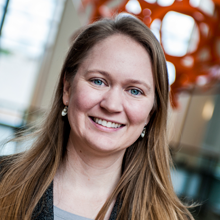 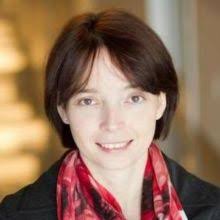 We rely on material properties every day. Styrofoam keeps coffee hot on the morning commute. Copper carries electricity to a car’s spark plugs. These properties arise due to the specific elements and arrangements of the atoms in a material.

But structures can also give materials specific properties. A coil of copper wire with a magnet rotating inside will create an electric current, whereas a straight copper wire won’t. A smooth sheet of silver is reflective, while a surface coated with tiny silver spheres is black.

The Greek preposition “meta” means “beyond,” so a metamaterial is a type of material engineered to have properties beyond those provided by nature. But to manipulate electromagnetic waves, these materials must have engineered features that are smaller than the light’s wavelength.

It’s like looking at an image on a television screen. If each pixel was the size of a human eye, everybody would come out looking like a Mario Brother. But shrink them down by a factor of 10,000 to mere micrometers, and you can recreate every line, wrinkle and pore on a movie star’s face.

In the invisibility cloak paper from 2006, researchers used microwaves because they can have wavelengths nearly a foot long. This made it easier to fabricate the individual pieces needed to control them on any benchtop.

Mikkelsen and Litchinitser, however, are working with waves from the infrared to the visible spectrum, which can be only hundreds of nanometers long. While the two are taking different approaches to fabricating the miniscule features needed to work in this realm, their results are equally impressive.

The Greek preposition “meta” means “beyond,” so a metamaterial is a type of material engineered to have properties beyond those provided by nature.

“One of my primary lines of research is investigating how we can control light on small dimensions and, in particular, how we can create ‘hot-spots’ where the incoming light is squeezed into small volumes,” said Mikkelsen. “One very effective way of doing that is by creating a sandwich structure consisting of a thin, insulating layer in between nanocubes and a metal film.”

The setup Mikkelsen is describing essentially uses nanoscale electromagnetic phenomena to “trap” light onto the surface of a metal nanocube in a form known as a plasmon. This is accomplished by fashioning silver cubes just a hundred nanometers wide and placing them only a few nanometers above a thin gold foil. When incoming light strikes the surface of a nanocube, it excites the silver's electrons, trapping the light's energy—but only at a certain frequency. 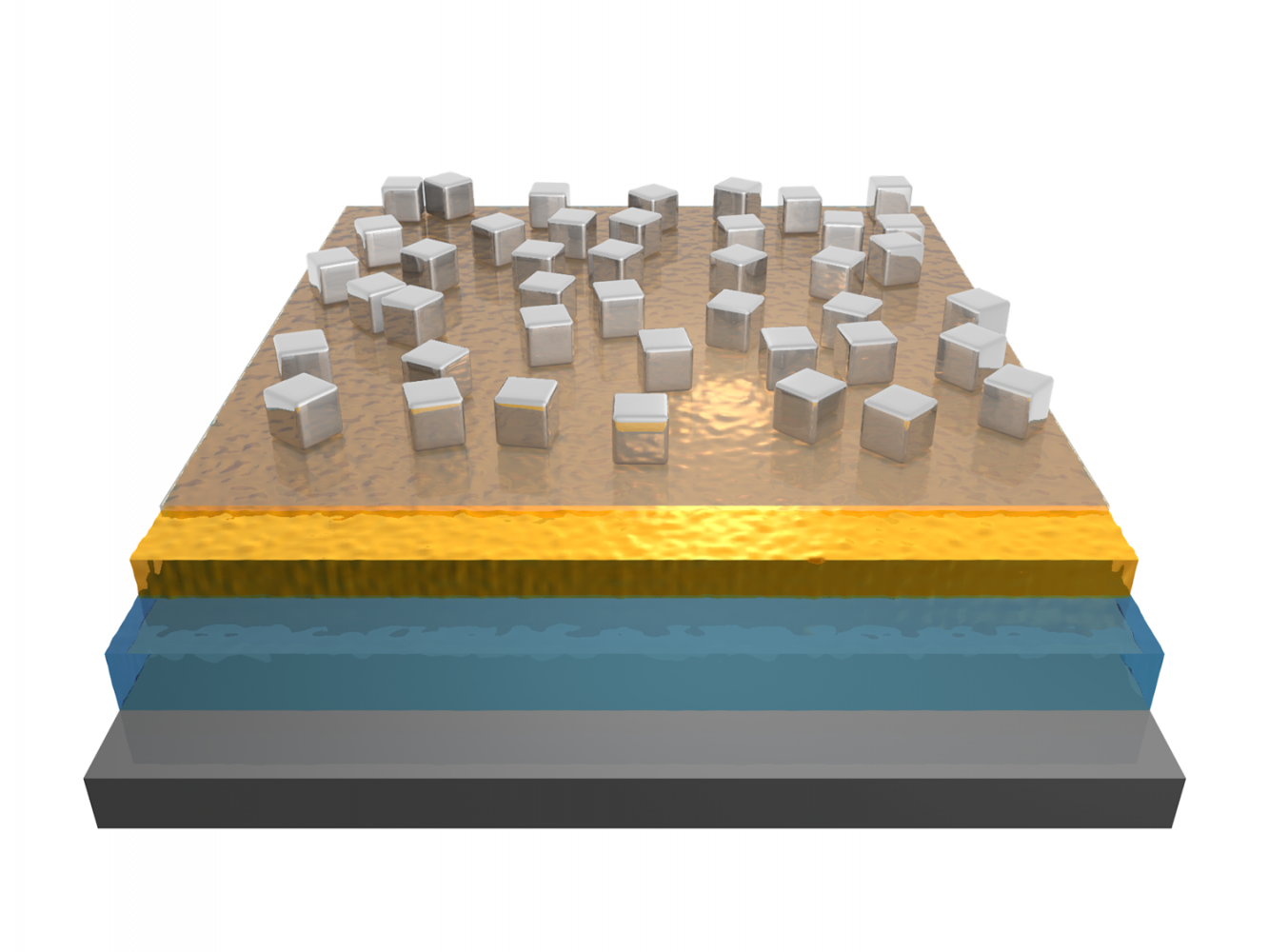 The size of the silver nanocubes and their distance from the base layer of gold determines that frequency, while controlling the spacing between the nanoparticles allows tuning the strength of the absorption.

By precisely tailoring these spacings, researchers can make the system absorb or emit any frequency of light they want.

“It is challenging to experimentally realize control of critical dimensions below 10 nanometers in a reproducible fashion,” said Mikkelsen. “Our next challenge is then to demonstrate that the phenomena we observe in such structures can actually be used in real devices.”

One such potential device Mikkelsen is pursuing is a compact, lightweight hyperspectral camera for precision agriculture. With the support of a Moore Inventor Fellowship, Mikkelsen is creating cameras with “superpixels” that consist of multiple smaller pixels, each tuned to absorb a different frequency of light.

Such cameras can indicate the type of plant in a field and its condition—whether it needs water, is stressed or has low nitrogen content. This information could enable precision agriculture, allowing fertilizer, pesticides, herbicides and water to be applied only where needed, potentially reducing pollution while saving water and money.

Imagine a hyperspectral camera mounted on a helicopter or drone mapping a field’s condition and transmitting that information to a tractor designed to deliver fertilizer or pesticides at variable rates across the fields. And because the approach could be implemented on a single chip, snap a multispectral image in a few trillionths of a second, and be produced and sold for just tens of dollars, Mikkelsen has lofty ambitions for her work.

“Imagine the impact not only in the United States, but also in low- and middle-income countries where there are often shortages of fertilizer, pesticides and water. By knowing where to apply those sparse resources, we could increase crop yield significantly and help reduce starvation.” 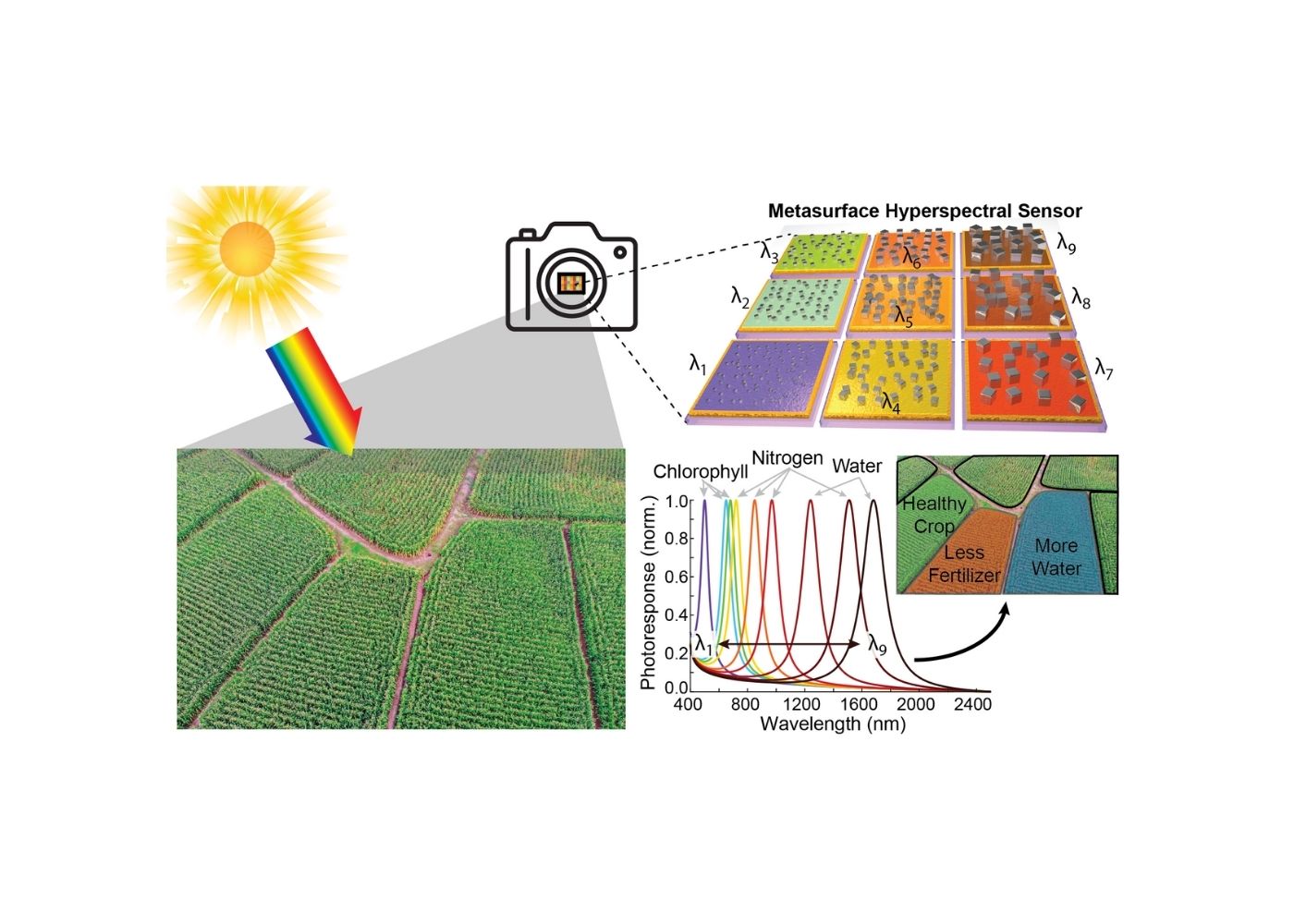 A new type of lightweight, inexpensive hyperspectral camera could enable precision agriculture. Different pixels can be tuned to specific frequencies of light that indicate the various needs of a crop field. By Maiken Mikkelsen and Jon Stewart

Rather than building up metamaterials through thin-film sandwiches and precisely tailored nanocubes, Litchinitser typically takes various nanofabrication approaches to manufacturing her metamaterials.

In the 2006 invisibility cloak paper, the metamaterial was created through grids of box-shaped cells with rings of copper wire embedded within each. While the details of Litchinitser’s metamaterials are much smaller—too small to even see with the naked eye—they also use repeating shapes and patterns to accomplish their goals.

Etching patterns out of various substrates at the scales required to manipulate visible light is extremely difficult. Even the process typically used in manufacturing computer chips is not precise enough.

In one of her primary lines of research, Litchinitser is working to dynamically switch the structure of a beam of light from a simple circular beam resembling water flowing through a tube to a vortex that looks more like water going down a drain or a tornado.

As computers get more powerful and connected, their hunger for data is constantly demanding more from the technologies used to transmit it.

Light-based optical fiber internet services from providers such as Google and AT&T are already replacing slower, outdated technologies based on electrons such as cable and DSL.

Much of the difference in bandwidth, however, does not come from light’s ability to outrace electricity. Instead it comes from “multiplexing” techniques—the ability to encode data into multiple aspects of a light wave, such as its amplitude, wavelength and polarization. But the aspects that scientists are able to control are beginning to run out, as is the amount of room left to store data in the conventional properties of light. 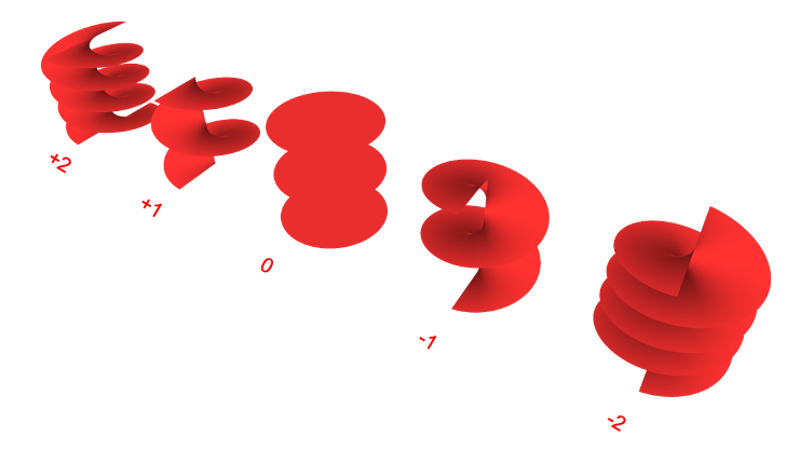 To break through this barrier, engineers are exploring some of light’s harder-to-control properties, such as its orbital angular momentum (OAM). The results can be imagined as a swirling vortex of light. 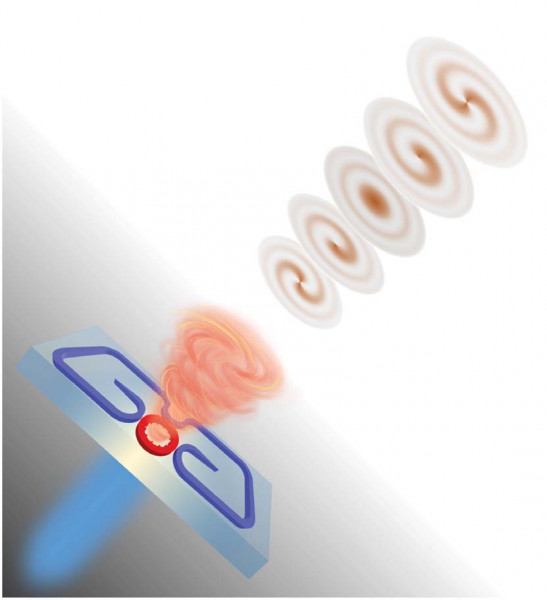 “I explain OAM to my classes by thinking about planets,” said Litchinitser. “Imagine a particle trapped by an optical beam with both spin and orbital momentum. Spin angular momentum makes a particle spinning on its axis like the Earth, which gives us night and day. At the same time, the particle rotates around the axis of the beam like the Earth rotates around the moving sun.”

The first ultracompact “vortex” laser source was demonstrated in 2016 by Litchinitser and Liang Feng, associate professor of materials science and engineering and electrical and systems engineering at the University of Pennsylvania, while the two were both still at the University at Buffalo. Until recently, however, the technology lacked the ability to switch between multiple different vortex modes, making it impossible to multiplex with them.

In a recent paper, however, Feng discovered a method to switch between three different orbital angular momentum (OAM) modes. Litchinitser devised a metamaterial filter that enabled further dynamical tunability of this microlaser, allowing it to demonstrate at least five different OAM modes. This new integrated optical source is likely to help optical communications devices carry five times as much data, or even more if the researchers can create versions of the technology with additional modes.

The ability to dynamically tune OAM values could also enable a photonic update to a classic encryption technique: frequency hopping. By rapidly switching between OAM modes in a pre-defined sequence known only to the sender and receiver, optical communications could be made impossible to intercept.

The sky is the limit for the improvements a dynamically tunable vortex laser could provide fields ranging from communications to computing. And Litchinitser is excited about pursuing them with her colleagues—just as long as the media doesn’t mistake the technology for a magic wand.