The burgeoning use of metamaterials in the field of optics does not rely on the limited set of materials found in nature, but rather man-made constructs that can be designed to control light’s many properties. This control is gained by use of metamaterials, which are not so much single substances but entire man-made structures that can be engineered to exhibit properties not readily found in nature. 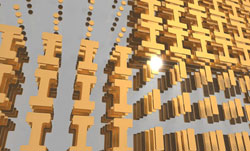 In their latest series of experiments, the Duke team demonstrated that a metamaterial construct they developed could create holograms -- like the images seen on credit or bank cards -- in the infrared range of light, something that had not been done before.

The Duke engineers point out that while this advance was achieved in a specific wavelength of light, the principles used to design and create the metamaterial in their experiments should apply in controlling light in most frequencies. 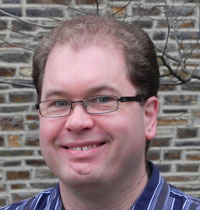 “In the past, our ability to create optical devices has been limited by the properties of natural materials,” said Stéphane Larouche, research scientist in electrical and computer engineering at Duke’s Pratt School of Engineering. “Now, with the advent of metamaterials, we can almost do whatever we want to do with light.

“In addition to holograms, the approach we developed easily extends to a broad range of optical devices,” Larouche said. “If realized, full three-dimensional capabilities open the door to new devices combining a wide range of properties. Our experiments provide a glimpse of the opportunities available for advanced optical devices based on metamaterials that can support quite complex material properties.”

The results of Larouche’s experiments, which were conducted in the laboratory of senior researcher David R. Smith, a professor of electrical and computer engineering, appeared in an advanced online publication of the journal Nature Materials. The research was supported by the Army Research Office’s Multidisciplinary University Research Initiative (MURI).

The metamaterial device fashioned by the Duke team doesn’t look anything like a lens, though its ability to control the direction of rays passing through it surpasses that of a conventional lens. While traditional lenses are made of clear substances -- like glass or plastic -- with highly polished surfaces, the new device looks more like a miniature set of tan Venetian blinds.

These metamaterials are constructed on thin slabs of the same material used to make computer chips. Metal elements are etched upon these slabs to form a lattice-like pattern. The metal elements can be arranged in limitless ways, depending on the properties desired.

“There is unquestionable potential for far more advanced and functional optical devices if greater control can be obtained over the underlying materials,” Larouche said. “The ability to design and fabricate the components of these metamaterial constructs has reached the point where we can now build even more sophisticated designs.

“We believe that just about any optical device can be made more efficient and effective using these new approaches,” he said.

The other members of the team, all from Duke, were Yu-Ju Tsai, Talmage Tyler and Nan M. Jokerst.