A Mind—and an Ear—for Big Data

At Duke, engineering doctoral student Chris Tralie discovered a passion for analyzing the topology of music—and for teaching undergraduates about the power of data science 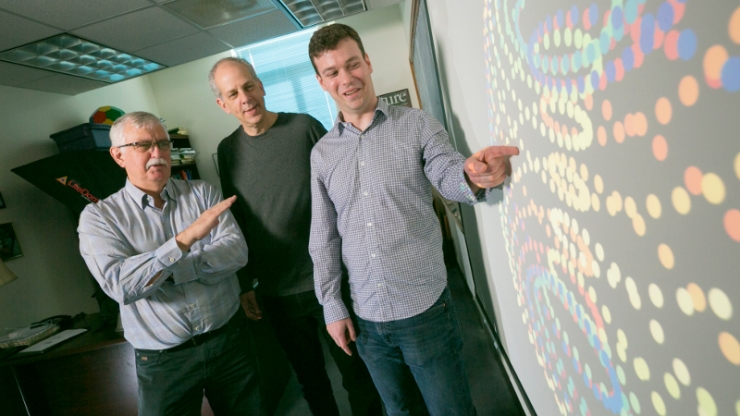 Chris Tralie wasn’t even working with big data when he came to Duke as a graduate student. But a movement gaining steam here in 2013 helped him realize he had the technical skillset to reveal structures and patterns where others saw chaos—or nothing.

“There were people working on Big Data problems in various departments when I first got to campus,” said Tralie, a doctoral candidate in electrical & computer engineering (ECE) and a National Science Foundation Graduate Research Fellow. “Then the Information Initiative at Duke launched. It was brilliant because it brought everyone together and let them learn from each other’s work. There was real and sudden excitement in the air.”

Tralie found his niche while learning about topology with John Harer, a professor of mathematics with a secondary appointment in ECE. The class boiled down to understanding the “shape” of data. Tralie thought, “Why can’t we do this with music?”

Tralie designed a program that analyzes many different musical parameters of a song and mathematically reduces each time point into 3D space. The resulting shape can help determine which genre of music a song belongs to and can even recognize covers of songs by other bands.

“Nobody thought you could do that, because of the differences in vocals and instruments,” said Tralie.

Tralie took his own academic journey and used it to turn other Duke students on to big data—creating a “Data Expedition” using his method for visualizing songs as a fun and approachable way to teach undergraduates how to design data-crunching algorithms.

Data Expeditions are projects proposed and taught by graduate students within the context of an existing undergraduate course. “Data Expeditions and Data+ both benefit our undergraduates by making technical subjects more relevant and exciting, but they’re also professional development opportunities for our graduate students,” said Robert Calderbank, director of iiD, which sponsors both programs. “Industry and academia both need people who can lead projects and manage multidisciplinary teams, so these experiences can provide a competitive advantage for Duke graduates.”

“The Data Expeditions were really useful for me growing as a mentor,” said Tralie. “I got to work with really talented students who were still learning the basics and yet had amazing new ideas that I could learn from too. Those skills will translate to my future career, where I hope to be a faculty member advising graduate students of my own someday in engineering or applied math.”

He also developed a new course for graduate students about using data analytics on video recognition challenges, like tracking heartbeats from video clips. Tralie’s own promising work in that arena can potentially add another element to an app developed to recognize signs of autism by another of his advisors, Guillermo Sapiro, the Edmund T. Pratt, Jr. School Professor of Electrical and Computer Engineering.

After defending his dissertation this spring, Tralie plans to stay in academia, at least in part because he loves the teaching experiences he has had while at Duke.

“Mentoring and teaching forces me to explain my work in simple terms, which raises my own understanding of it,” said Tralie. “Plus the students all end up going out and doing their own interesting things, which they can later teach me about in return. They’re like my eyes and ears out there in the fast developing world of Big Data.”