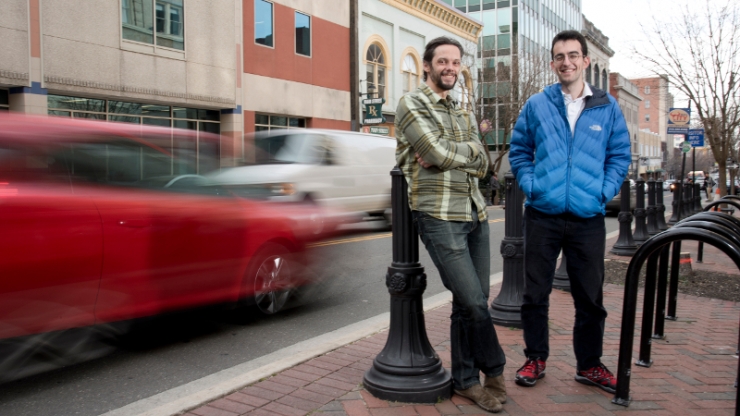 Efe Aras stands with his adviser Galen Reeves in the busy streets of downtown Durham. Their research aims to reveal how much traffic might change if cars could go park themselves.

Imagine having your car drop you at the office and then go park itself several miles away. Not only would it make your morning that much more bearable, it’d open up parking spots on otherwise congested city streets.

As the concept of driverless cars speeds from science fiction to reality, researchers are making many promises about potential improvements in safety, traffic and convenience. But is there evidence to support those claims?

Efe Aras, a Duke Engineering senior, is using ideas from statistics and mathematics to determine just how big of a traffic boon self-parking cars could be. A Pratt Undergraduate Research Fellow, Aras has teamed up with Galen Reeves, assistant professor of electrical and computer engineering and statistical science known for his work in information theory, statistical signal processing and machine learning.

Aras and Reeves developed a model incorporating variables such as the density of cars on the road, how long cars stay in roadside parking spots and how picky both drivers and driverless cars might be about those spots, among others. The model represents a small, generic grid of roads, though it Aras could scaled it up to represent an actual city’s streets.

The duo ran simulations to determine how traffic patterns change depending on the percentage of driverless cars on the road. And to be fair, they accounted for the fact that driverless cars could actually increase traffic congestion.

That was not, however, the case—they found that as the number of future autonomous cars goes up, the level of potential road rage goes down.

“You also get more traffic relief depending on what city you’re modeling,” said Aras. “As the population and congestion goes up, the effects of driverless cars become more apparent.”

“It is exciting to see how old ideas from physics and math can be used to address difficult questions about how new technologies, such as self-driving cars, will impact society,” added Reeves.

Self-parking cars isn’t the only data analytics experience Aras is getting at Duke. As part of his experience in the National Academy of Engineering Grand Challenge Scholars Program, he is also working on making big data experiments more protective of individual privacy.

“What makes Duke so special is all of the different connections in different departments,” said Aras. “Engineers look at problems differently than mathematicians, so it’s sometimes harder for us to deal with complex models. We may think we have a robust model and solution, but to understand a model completely, you have to understand the mathematical beauty of it.”

For example, explains Aras, say you’re part of a medical study that you’d rather keep private but you also happen to be the only person on campus with a blue backpack. If a big data researcher is analyzing records and puts in a query about blue backpacks, then they would know that you were in the study.

“But there are ways to privatize data even in a big dataset,” said Aras, who is working with Ashwin Machanavajjhala, professor of computer science, on the project. “You can create just enough background noise to stop things like that from happening without statistically changing the results of a study in any meaningful way.”