An undergraduate machine learning enthusiast secures $45,000 to fund a computing mini-cluster dedicated to student use 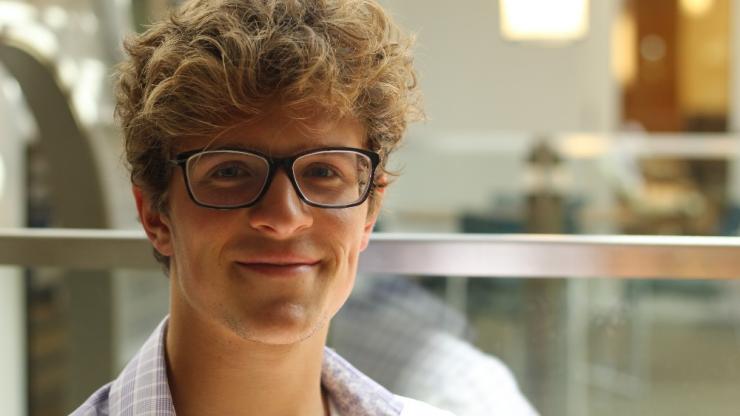 Luke Truitt ECE ’21 has spent the last year scrounging for spare graphic processing units to support his machine learning hobby—even slivers of GPUs can add up to enough computational power to support a small project.

Machine learning is used widely at Duke, especially in engineering, medicine and computer science. Anyone whose research hinges on parsing vast amounts of data is probably taking a machine learning approach—deploying mathematical models to make inferences or decisions based on sample data, or “training” data. (When machine learning folks talk about “training their model,” this is what they’re talking about.)

Duke faculty use machine learning to scan video recordings for fleeting facial expressions that indicate potential signs of autism spectrum disorder, and to sort through mountains of clinical records and claims data in search of patients at risk for medical emergencies. They use machine learning to create better climate models, and recipes for new materials, like superhard carbon.

Machine learning has taken off in recent years, in part because of the wide availability of GPUs. GPUs are a kind of computer chip that rapidly process data, and were originally used to render images, freeing up the central processor for other tasks. Now, they are also used for AI and machine learning applications.

GPUs are available as physical components, and also in the Cloud, where anyone can get access to them—for a price. Some faculty members who focus on machine learning buy and maintain small GPU clusters of their own, but many choose to buy into a shared GPU-infused computing cluster administered by Duke’s Office of Institutional Technology. Costs for the service might easily reach into the tens of thousands of dollars, depending on the amount of data they need to process.

But faculty members who pay for that access don’t always use the resource at capacity—little crumbs of computational power from the racks or credits in the Cloud might be left over, where undergraduates like Truitt can snap them up.

Little crumbs of computational power from the racks or credits in the Cloud might be left over, where undergraduates like Truitt can snap them up.

Truitt became interested in machine learning last year after a summer stint at General Motors, where he worked with a team trying to improve manufacturing processes. “You put an air cap on a tire, but how do you know the cap is actually secure?” Truitt asked. “Right now they take an image with a camera, and look at the contrast of the different parts, and it’s very error-prone—only around 97 percent accurate,” he explained. “So we applied machine learning for error detection, and we got the number up to 99.7 percent accuracy. The R&D team estimated that it saved the company something like 50 million dollars a year. Since then I’ve just been trying to do as much with machine learning as I can, because it’s so cool.”

Starting the Duke Applied Machine Learning Club and seeking out research projects that could benefit from machine learning helped to scratch Truitt’s itch. The club is currently working on two projects: cleaning up artifact data from anomalies like tattoos and metal fillings from brain FMRIs for the Duke Institute for Brain Sciences, and working with a PhD student in ECE professor Missy Cummings’s lab to analyze data gathered by a “fidget watch,” which lets its wearers interact with a watch app when bored or distracted. Information about the frequency and length of these interaction events, alongside health data like heart rate and movement data, could help researchers identify triggers for people with disorders like ADHD.

The club’s FMRI project, said Truitt, runs entirely off of bits and pieces of scavenged computing.

Truitt wasn’t satisfied with the precarious nature of the computing power available to the club, so he brought the problem to ECE professor John Board. The two put together a proposal for Duke Vice President for Research Larry Carin—himself a noted Duke ECE machine-learning expert—asking for a mini-cluster of GPUs dedicated to student use. Board thought that OIT might be able to integrate the extra GPUs into its existing framework, and split them up using technology developed by OIT’s own Mark McCahill, so more students could access them at a time.

One day last week, Truitt woke up to an email in his inbox notifying him that he had been awarded a $45k grant to purchase the GPUs. Half had come from the Office of the Vice President for Research, and half from OIT.

“I emailed Dr. Board to ask if it was real,” laughed Truitt. “It just solved so many of the problems we’ve had.”

In addition to computing power, the grant will also fund a website to monitor the existing cluster, so administrators can track when and how it’s being used—and Truitt has plenty of ideas.

For one, he thinks the university’s Data+ and +DS classes could benefit from the GPU addition, along with classes like EGR 590: Deep Learning. “Our homeworks are designed around the fact that we can’t do huge computations,” said Truitt. “We couldn’t perform cross-validation on our models because it’s computationally expensive. But if you could schedule one-fifth of a GPU per student for a week, they could perform that validation, and then pass it on to the next person.”

“What would happen if I went back 50 years, selected one company from the S&P 500 every year, saw how the S&P 500 changed, graphed all of that, looked to see if there was anything unique? That’s just a fun kind of project that I would want to do on the side. You laugh, but that’s something that I think would be super-cool,” said Truitt, “and other people will, too.”