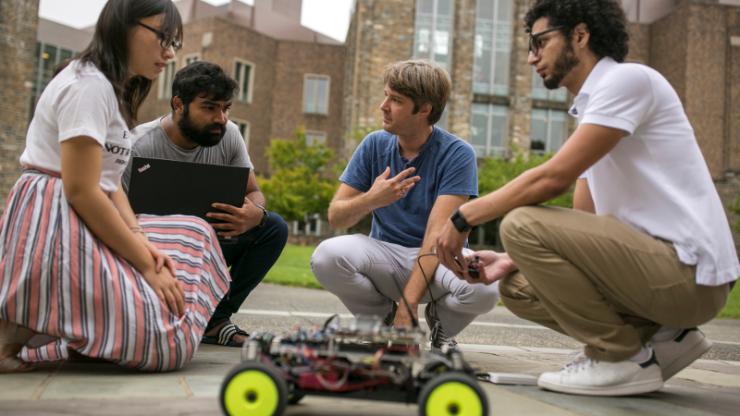 Miroslav Pajic, the Nortel Networks Assistant Professor of Electrical and Computer Engineering at Duke University, has won the 2019 Institute of Electrical and Electronics Engineers (IEEE) Technical Committee on Cyber-Physical Systems (TCCPS) Early Career Award. He was awarded for “outstanding contributions to design and analysis methodologies for high-assurance cyber-physical systems.” This is his second major research award in 2019, after winning the Association for Computing Machinery Special Interest Group on Embedded Systems (ACM SIGBED) Early Career Researcher Award earlier this year.

IEEE TCCPS aims at promoting interdisciplinary research and education in the field of cyber-physical systems (CPS). CPS, which feature tight interaction of computing with the physical world, are the next generation of safety-critical embedded control systems in domains spanning from autonomous vehicles, industrial automation and advanced manufacturing, to medical devices and systems, energy-efficient buildings and smart cities.

The IEEE TCCPS Early Career Award recognizes a junior researcher from either academia or industry who has demonstrated outstanding contributions to the field of CPS in the early stage of his/her career development with a particular emphasis on the significance and impacts of the research.

Pajic’s research focuses on high-assurance CPS, creating methods to build such systems with strong safety, efficiency and security guarantees. For example, one of his projects focuses on providing safety guarantees for autonomous vehicles even in the presence of adversarial activities.

His approach takes advantage of a car’s interactions with its physical environment to detect attacks and provide resiliency against them. For instance, a digital assailant could compromise the GPS to take an autonomous vehicle off course. But by using previous sensor measurements combined with standard security protocols, Pajic and his team have shown that the car can recognize the false data and act accordingly.

Pajic’s work in this arena, which has been supported by the National Science Foundation (NSF), Office of Naval Research (ONR), Air Force Office of Scientific Research (AFOSR) and Intel, has recently earned him several honors, including  the NSF CAREER Award and ONR Young Investigator Award, as well as best paper awards in top CPS research venues. He is also leading the technical efforts to design attack-resilient autonomous systems, as part of the new $6 million AFOSR Center of Excellence (CoE) for Assured Autonomy in Contested Environments.