Precise Indoor Localization? There's an App for That

The application has been dubbed UnLoc, short for unsupervised indoor localization.

DURHAM, N.C. -- GPS has been a tremendously successful technology for positioning users in outdoor environments. But attaining GPS-like accuracy indoors has eluded telecommunication researchers for years.

That is, until now, according to a Duke University researcher.

In the last few years, several companies including Google, Microsoft, Qualcomm and Apple have focused on indoor localization. Research teams at universities also have attacked the problem. Practical solutions are converging, and a localization application is expected to be in the market soon.

The ability to achieve precise indoor localization can open up a host of mobile apps, said Romit Roy Choudhury, associate professor of computer engineering at Duke’s Pratt School of Engineering and principal investigator for the Duke research team. For example, shoppers at stores could learn more about products in front of them using their phones, or parents could locate their children in malls. 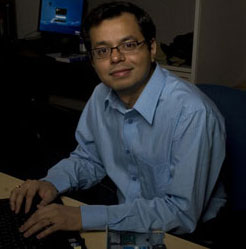 Roy Choudhury also believes such a capability would be helpful with navigation in hospitals or in smart homes -- imagine lights in your home following you based on your precise location and activity.

The Duke team's key idea for accurate indoor localization is analogous to how people use landmarks in outdoor environments. Say that Alice is in Bob's neighborhood and calls him for directions. She tells Bob she is standing in front of a fountain that he is familiar with and then Bob is able to guide her from there.

“Our technique adopts the same intuition -- it takes advantage of 'invisible' landmarks in indoor environments that a mobile phone can sense using its built-in sensors," said Roy Choudhury. "Example landmarks could be distinct motion signatures created by elevators or stairwells, because the phone can detect motion, or certain dead spots where WiFi or 3G signals are absent."

Once such an invisible landmark is sensed, the phone can infer its current location, and then track its path from that point forward using motion sensors (such as accelerometers, compasses and gyroscopes). The tracking may become inaccurate over time, but as the phone hits other landmarks, it continuously corrects its location.

The details of the system were presented and demonstrated at the 10th ACM International Conference on Mobile Systems, Applications, and Services (MobiSys) in Low Wood Bay, U.K. The application has been dubbed UnLoc, short for unsupervised indoor localization.

“The best part of the application is that it is recursive, which means that it starts with zero knowledge but ‘learns’ over time,” said He Wang, the lead Ph.D. student on the project. “Therefore, it becomes more and more accurate the more it is used in a given building.” 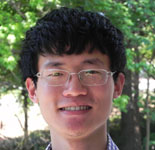 UnLoc does not require any pre-deployment effort, often called "wardriving." Wardriving is a process where every location needs to be visited and calibrated to create a database of per-location fingerprints. This is often expensive especially because it needs to be done periodically.

UnLoc is also less battery-hungry than GPS, which can drain a phone’s battery in a matter of hours. The use of energy-efficient inertial sensors, available in almost all smartphones, allows a user to track location continuously through the day.

Tested in the Northgate shopping mall in Durham, N.C., as well as in the computer science and engineering buildings on Duke’s campus, UnLoc achieves 1.6 meter accuracy on average.

"Further improvement is feasible by learning more landmarks and improving the tracking algorithms," said Alex Mariakakis, a Duke undergraduate involved in the project.

The development of the UnLoc technique was supported by the National Science Foundation and Google.

Other members of the team were Souvik Sen from Duke, as well as Ahmed Elgohary, Moustafa Farid and Moustafa Youssef, all from the Egypt-Japan University of Science and Technology.