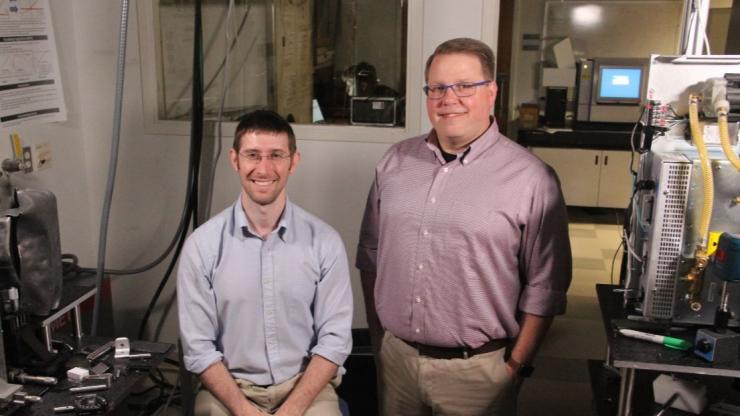 Every day, TSA agents intercept a baffling assortment of weird and dangerous items that passengers try to smuggle onto planes. Most often, they catch the contraband with X-ray imaging. But anyone who has ever flown for business is familiar with the limitations of that process: X-rays have trouble passing through metal objects like laptops, which is why travelers must remove their laptops from their luggage and send them through the conveyor in a separate bin.

ECE associate professor Michael Gehm said that over the next few years, airports will begin using computerized tomography—analogous to CT scanners used in hospitals—to get 3D X-ray visuals on a bag’s contents. But even these CT images cannot always easily distinguish among similar liquids, which leaves the problem of determining whether a bottle is full of shampoo or something more sinister.

“You really need some additional information,” said Joel Greenberg, an associate research professor in Gehm’s lab and the principal investigator on a new government-funded $5.8 million aviation security project. “Instead of measuring only the X-rays that go straight through an object, we also want to measure the scattered X-rays—the ones that go in, interact with the material in the bag, and bounce off.”

“Instead of measuring only the X-rays that go straight through an object, we also want to measure the scattered X-rays—the ones that go in, interact with the material in the bag, and bounce off.”

“The way in which they interact gives you identification at the molecular level,” added Gehm. “You get the unique fingerprint of the material in the bag.”

That interaction is called X-ray diffraction, and it has been studied for more than 100 years. While the physics is not new, stressed Greenberg, the technique is difficult to implement because of the very weak signal that is produced.

“If you were taking a photograph in the dark, you could open up your shutter for a long time and eventually capture enough light to illuminate the subject of the photo,” explained Gehm. “If you use a quick shutter speed, your image will be dark. It’s the same principle—we have a weak process that doesn’t give us many photons to measure.”

With the length of the lines at airport security checkpoints, creating long exposures isn’t an option. “You have to capture the image quickly to keep the lines moving,” said Gehm.

The pair is designing an X-ray system that combines transmission imaging and X-ray diffraction tomography to get information faster. But making decisions about the system design— how many sensors and/or sources, what types, and what configurations—can become prohibitively expensive if a prototype has to be built before any real testing can occur. Having the ability to do an initial round of virtual testing allows researchers to quickly and inexpensively zero in on a promising system configuration.

Instead, the team developed a mathematical tool that simulates detector performance, source performance, and geometry, and gives them the ability to analyze which configurations show the most promise before building them. “We’re attacking it using the simulation tool and information theory, and getting diffraction measurements faster, to relieve some of the practical pressures,” said Gehm.

Greenberg and Gehm have brought in collaborators with highly specialized expertise to augment their work, including Duke radiology professor Anuj Kapadia and the University of Arizona’s Amit Ashok, a professor of optical sciences.

“Quicker lines at airport security and getting to hold on to your water bottle would be nice benefits,” said Greenberg, “but better detection of current and emerging threats is paramount.”