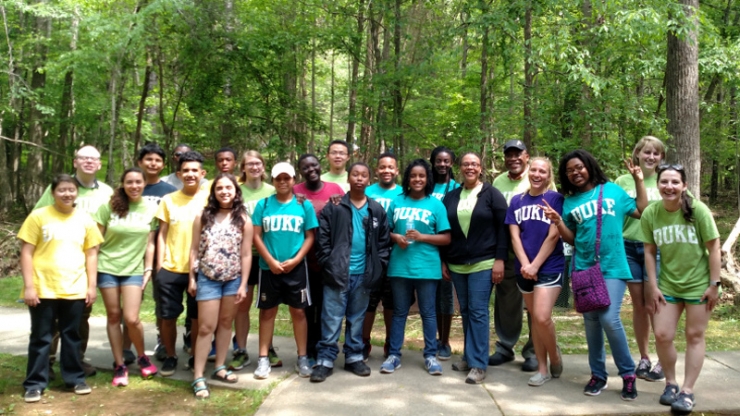 Participants in the 2016-2017 SENSOR Saturday Academy at the program

There was some disappointment when the 3D printed boats designed to carry sensors into the Eno River didn’t float. But as any engineer will tell you, failure is just another teachable moment and an exercise in learning what doesn’t work.

That was only one of the many lessons learned by 20 8th and 9th graders from Durham Public Schools who took part in this year’s Student Engineers Network, Strengthening Opportunities in Research (SENSOR) Saturday Academy. Hosted for the third year running by Duke Engineering, the program teaches students about the engineering design process through learning about water quality measurement, with the ultimate goal of getting kids more interested in the STEM disciplines.

In their first year in the program, 8th graders learn about different types of sensors that are used to measure water quality, which coincides with their 8th-grade curriculum. The same students then return as 9th graders to design their own project—this year they built 3D printers and used them to construct boats to carry sensors onto a body of water.

The program begins in September and runs through the end of the school year, meeting every two or three weeks. In the final weekend of April, the SENSOR Saturday Academy concluded with a field trip to the Eno River. While the 8th graders used the skills they’d acquired to determine if the Eno River is safe to swim in, the older students tested out the seaworthiness of their boats.

“One group of students concluded the river was not safe to swim in because it had too many bugs, even though the tests came back fine,” said Adrienne Stiff-Roberts, associate professor of electrical and computer engineering and director of the program. “And one of the boats failed because the sensor it was designed to carry kept tipping it over. But at the end of the day, the students talked it over and figured out how to do it better next time.”

This was the third consecutive year that the SENSOR Saturday Academy was supported by the Burroughs Wellcome Fund. As the program grows and gains steam, support will come from Duke University beginning next year.

Anyone interested in joining the program or volunteering can find more information at stiffrobertslab.pratt.duke.edu/sensor-saturday-academy