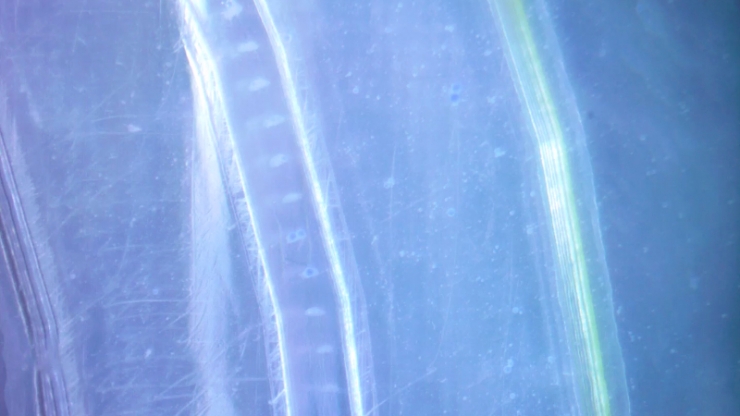 There are no physical structures in this video. The “walls” guiding the particles through the liquid are actually a complex combination of sound waves created by a new technique called a shadow waveguide.

Engineers at Duke University have devised a new approach to using sound waves to manipulate tiny particles suspended in liquid in complex ways. Dubbed a “shadow waveguide,” the technique uses only two sound sources to create a tightly confined, spatially complex acoustic field inside a chamber without requiring any interior structure. The technology offers a new suite of features to the fast-developing platform of acoustic tweezers that has applications in fields such as chemical reaction control, micro-robotics, drug delivery, and cell and tissue engineering.

The research appears online August 18 in the journal Science Advances.

Acoustic tweezers are an emerging technology that uses sound waves to manipulate small particles suspended in liquid. Because no physical object is touching the particles, the technique is gentle, offers no biocompatibility issues and requires no labels, making it an enticing choice for working with delicate biomolecules.

In the biomedical realm, acoustic tweezers can trap, rotate and move particles or organisms for inspection, sorting or other applications. They can keep certain reagents and chemicals separated before allowing them to mix in precise amounts to control reactions. The technology also provides an avenue for patterning different materials before using any number of techniques to fix them in place to create new types of materials.

Despite all of its potential, the technology does have its limitations. Most current setups use multiple sound sources placed around a liquid-filled chamber that creates a checkerboard pattern of areas that can trap and move particles in lockstep with one another. This makes it difficult to manipulate particles independently of one another or through complex patterns. The latter can be achieved by including solid channel structures within the chamber, but this can damage delicate particles and limit how quickly samples can be moved through the system.

To overcome these limitations, Steve Cummer, the William H. Younger Distinguished Professor of Engineering at Duke, turned to ideas inspired by metamaterials. Metamaterials are synthetic materials composed of many individual engineered features, which together produce properties not found in nature.

In the new paper, Cummer and Junfei Li, a postdoctoral researcher working in his lab, in collaboration with longtime acoustic tweezer innovator Tony Huang, the William Bevan Distinguished Professor of Engineering at Duke, demonstrate various capabilities of their shadow waveguide approach. Each shadow waveguide is created by 3D printing a mold with features specific to how particles inside the chamber are to be controlled. A type of silicone called polydimethylsiloxane (PDMS) is poured into each half-tube mold with features that create channels within the finished product.

The PDMS has acoustic properties very similar to water, which allows sound waves to easily travel from the shadow waveguide into the chamber. The pattern of the air-filled channels within the PDMS dictates where and how the sound waves enter the chamber, allowing the researchers to create a wide range of complex acoustic fields to control particles.

Cummer and Li use this setup to trap and move individual microparticles along multiple complex paths through the chamber. And by setting up two sound sources—one at either end of the shadow waveguide—the researchers show they can pump particles along a slowly bending arc with precisely controlled speed.

With this demonstration in hand, the researchers are now looking to add complexity to their invention, either by making the waveguides dynamically reconfigurable or by merging it with other existing approaches to acoustic tweezers.

“Acoustic devices are very difficult to make reconfigurable, but we would love to figure out a way to make that possible because it would be a dramatic improvement in this technique’s usability,” said Li. “For now, we’re looking for specific challenges that we could adapt these shadow waveguides to address to move it from a proof-of-concept demonstration to a more sophisticated application.”

“The path to application might be to merge this with multiple concepts in the field,” added Cummer. “Adding multiple sound sources and structures to create more complexity might be what nudges us over the edge in some applications.”