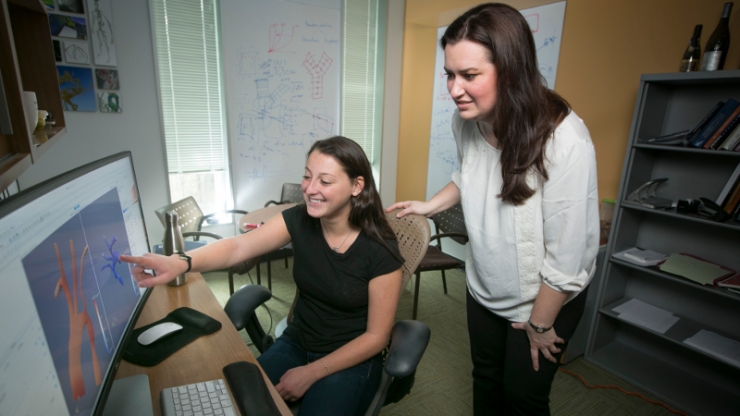 In the early 17th century, William Harvey made the first known complete, detailed description of the body's circulatory system. Roughly 300 years later, biomedical engineers at Duke are changing the definition of "detailed."

Stephanie Musinsky, a junior double-majoring in biomedical engineering and electrical and computer engineering, is working on an evolving supercomputer code that models blood flow down to the individual cell. Aptly named "HARVEY," the code could help physicians determine cardiovascular risks and predict which treatments would return the best outcomes.

HARVEY is the brainchild of Amanda Randles, assistant professor of biomedical engineering at Duke, who has already shown the code capable of modeling blood flow through the human aorta and other complex vascular regions. As an Undergraduate Research Fellow, Musinsky has been working with Randles for the past year to complete three major upgrades, the first being to make the simulation more intuitive.

"The time regulation code used to take a lot of parameters into account and was pretty confusing," said Musinsky, who is the first student to introduce changes to the code that are now being used by the entire group. "The input use to be in non-dimensional units, but now you can just enter normal measurements of time like seconds."

"Students like Stephanie can benefit by getting first-hand knowledge of how the material she's learning in class can be applied to translational research and potentially influence future treatment methods for some of the highest burden diseases today," said Randles. "I think large-scale simulations like the ones Stephanie is working on will play a key role in the future of biomedical engineering."

The second upgrade takes the simulation's simplified, steady flow of blood and introduces a patient-specific pulsatile waveform at the inlet. This allows the blood flow to pulse in time with simulated activity, such as a resting state versus a stressful cardio session at the gym.

Stephanie's final task involves developing techniques that will enable simulations of much longer periods. A significant unmet need in the field is to take models of several heartbeats and extending the simulation over several minutes or hours of activity. It's a vital question to answer, as modeling one or two heartbeats in large regions of the vasculature currently requires time on the supercomputers of Lawrence Livermore National Laboratory and Oak Ridge National Laboratory.

"I never really enjoyed working in a traditional wet laboratory, so working on this project has been great for me," said Musinsky, who has found a home in data analytics. "I've become better at coding and problem-solving, and I've learned a lot I wouldn't have otherwise."