The Sound of a Broken Heart 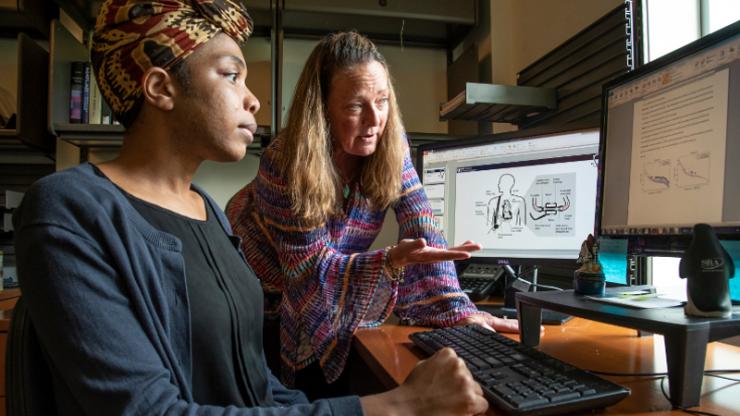 The project started when Ravi Karra, assistant professor of medicine at Duke University Medical Center, lost his stethoscope and replaced it with a more sensitive digital version. An expert in Left Ventricular Assist Devices (LVADs), he noticed a subtle difference in the way the devices sounded when patients were experiencing severe complications. Paired with his new digital stethoscope’s capability of recording data, the observation led to a new idea.

“I noticed that LVAD pumps that were doing well sounded slightly different than when they were having problems,” said Karra. “I thought maybe there was an opportunity here to catch complications at home before they become critical.”

An LVAD is a device used for patients that have reached end-stage heart failure. Implanted into the left ventricle through open-heart surgery, the battery-operated mechanical pump helps send blood throughout the rest of the body. The devices are implanted in up to 3,000 patients in the United States each year, and Duke Health has one of the largest LVAD programs in the world, supporting more than 300 patients.

While the devices do help prolong and provide a better quality of life, they come with their own set of problems. Nearly 60 percent of patients are readmitted within the first year of receiving an LVAD, most with complications that have already progressed to life-threatening stages.

One of the most common complications occurs when blood clots form in the device. An LVAD is basically a motor spinning a number of fan blades to push blood through the left ventricle. When clots begin to form, the motor must compensate, which creates audible changes that are governed by physics.

Working with colleague Priyesh Patel, assistant professor of medicine at the Duke University Medical Center, Karra turned to Duke Engineering to better understand the mechanical underpinnings of what he was hearing.

“When a lawnmower goes over a thick patch of grass, the rotor blades struggle to spin and the motor creates a different sound,” said Leslie Collins, professor of electrical and computer engineering at Duke. “Those changes in the acoustic spectrum can be expressed through principles governing pump frequency. We just have to be able to hear them and then work to understand what the audio cues mean for the patient.”

For help with understanding the audible changes, the growing collaboration brought in Boyla Mainsah, a research scientist in Duke’s Applied Machine Learning Lab. Their hope is that with enough audio clips of LVADs in action, machine learning can find patterns leading to the early detection of problems.

“We’ve shown there’s a clear difference in the sound produced in the most devastating complications, but we want to be able to spot more minor complications in advance as well." - Priyesh Patel, assistant professor of medicine, Duke University Medical Center

In a small proof-of-concept study, the researchers recorded the sounds of two patients’ LVADs that were dealing with acute blood coagulation both before and after the struggling device was replaced. After completing a thorough spectral analysis of the recordings, the researchers were able to show the same clear differences in the acoustic harmonic frequencies between normal LVAD devices and malfunctioning LVAD devices in both patients.

With that success in hand, the group has received a grant to conduct a larger study from the Duke Institute for Health Innovation (DIHI), which promotes innovation in health and health care through high-impact innovation pilot programs. Their plan is to have 24 patients take regular recordings of their LVAD for six months. Because 60 percent of patients experience complications within a year, the researchers should be able to obtain recordings of a malfunctioning LVAD well before symptoms appear.

“We’ve shown there’s a clear difference in the sound produced in the most devastating complications, but we want to be able to spot more minor complications in advance as well,” said Patel.

If successful, the method could prove useful for early detection in a wide range of medical conditions that have nothing to do with LVADs—or even the heart.

“Because of the way that pumps work, it should be relatively easy for machine-learning algorithms to analyze their acoustic signatures and identify major problems,” said Collins. “The idea could potentially be scaled up to much larger applications that affect a much broader portion of the population.”