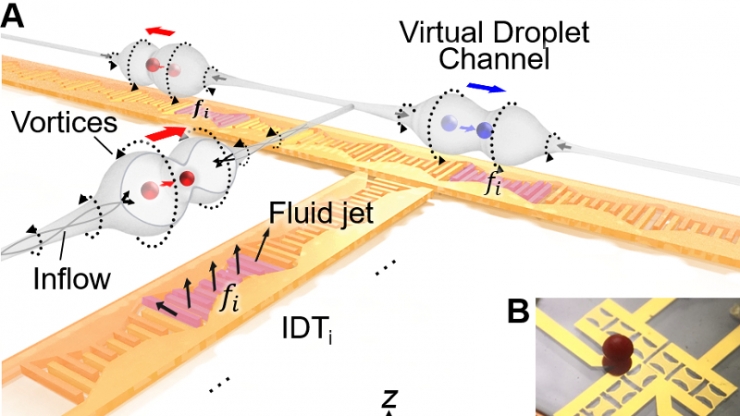 Droplets of different sizes sit on grids of transducers that vibrate to create tunnels in a thin layer of oil, which can transport the droplets in multiple directions.

DURHAM, N.C. – Engineers at Duke University have demonstrated a versatile microfluidic lab-on-a-chip that uses sound waves to create tunnels in oil to touchlessly manipulate and transport droplets. The technology could form the basis of a small-scale, programmable, rewritable biomedical chip that is completely reusable to enable on-site diagnostics or laboratory research.

The results appear online on June 10 in the journal Science Advances.

“Our new system achieves rewritable routing, sorting and gating of droplets with minimal external control, which are essential functions for the digital logic control of droplets,” said Tony Jun Huang, the William Bevan Distinguished Professor of Mechanical Engineering and Materials Science at Duke. “And we achieve it with less energy and a simpler setup that can control more droplets simultaneously than previous systems.”

Automated fluid handling has driven the development of many scientific fields such as clinical diagnostics and large-scale compound screening. While ubiquitous in the modern biomedical research and pharmaceutical industries, these systems are bulky, expensive and do not handle small volumes of liquids well.

Lab-on-a-chip systems have been able to fill this space to some extent, but most are hindered by one major drawback—surface absorption. Because these devices rely on solid surfaces, the samples being transported inevitably leave traces of themselves behind that can lead to contamination.

The new lab-on-a-chip platform uses a thin layer of inert, immiscible oil to stop droplets from leaving behind any trace of themselves. Just below the oil, a grid of piezoelectric transducers vibrate when electricity is passed through them. Just like the surface of a subwoofer, these vibrations create sound waves in the thin layer of oil above them.

These sound waves form complex patterns when they bounce off the top and bottom of the chip as well as when they run into one another. By meticulously planning the design of the transducers and controlling the frequency and strength of the vibrations causing the waves, the researchers are able to create vortices that, when combined, form tunnels that can push and pull droplets in any direction along the surface of the device.

“The new system uses dual-mode transducers, which can transport droplets along x or y axis based on two different streaming patterns,” said Huang. “This is a big step up from our previous system, which simply created a series of dimples in the oil to pass droplets along on a single axis.”

Aiding Huang in the creation of this upgraded system was Krishnendu Chakrabarty, the John Cocke Distinguished Professor of Electrical and Computer Engineering at Duke, and his PhD student Zhanwei Zhong. The pair helped design the electronics at the heart of the new lab-on-a-chip demonstration, and greatly upgraded and miniaturized the wire connections, controllers and other hardware used in the system.

By using dual-mode transducers, the researchers were able to move droplets along two axes while simultaneously reducing the complexity of the electronics four-fold. They were also able to reduce the operating voltage of the transducers three-to-seven times lower than previous system, which allowed it to simultaneously control eight droplets. And by introducing a microcontroller to the setup, the researchers were able to program and automate much of the droplet movement.

The researchers show off the capabilities of their new device in a series of videos. In one, a droplet is quickly whisked around the exterior of a square. Others show droplets coming to a “T” intersection and turning right or left, and the creation of a “logic gate” that can either interrupt a droplet’s movement along a corridor or allow it to pass through.

The ability to control droplets in a manner similar to the logic systems found on a computer chip is essential to a wide variety of clinical and research procedures.

“Our next step is to combine the miniaturized radio-frequency power-supply and control board designed by Professor Chakrabarty’s team for large-scale integration and dynamic planning,” said Huang. “We’re also planning to integrate the ability to split droplets into two without having to touch them.”