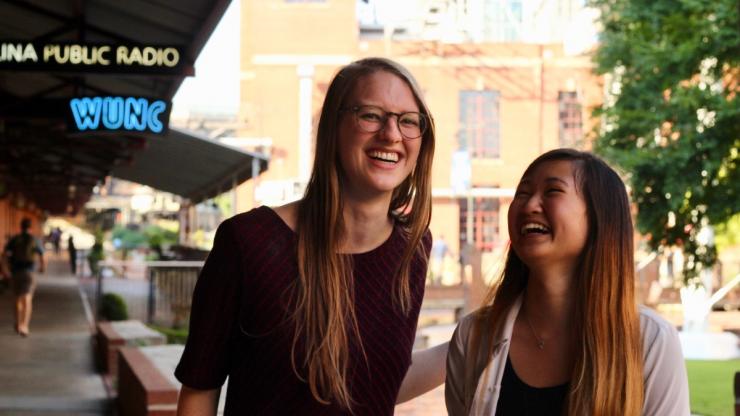 These are the three words that sum up joint computer science and electrical and computer engineering student Maddie Wilkinson, according to her supervisor Stacey Krug. Krug manages client relationships at Lucid Dream, a Durham-based software company that builds virtual and augmented reality applications to help large enterprise clients with training, marketing, sales, and recruitment. Krug hired Wilkinson as an intern this summer, through the Duke Technology Scholars program—aka “DTech.”

“Maddie was very self-directed and had no trouble jumping into client projects,” said Krug. “We had a very busy summer, and I can’t imagine what it would have been like for us if Maddie wasn’t on the team. Her contributions undoubtedly helped us meet our deadlines and create impactful work.”

It might surprise Krug to know that Wilkinson, who has wanted to be a scientist since third grade and who learned how to use accelerometers to approximate forward motion in virtual reality applications before she even graduated from high school, felt unsure about her role at Lucid Dream despite her proficiency.

“Towards the beginning of my internship I was very nervous about not knowing anything,” said Wilkinson. “We were working with software that I hadn’t used in a long time. I was constantly asking questions, and I was really nervous about not being able to contribute.”

As a DTech Scholar, though, Wilkinson had a ready-made support network at her fingertips. DTech exists to close the gender gap in the tech sector. A collaborative program between Duke’s Trinity College of Arts & Sciences and Pratt School of Engineering, it serves women in both computer science and engineering by connecting them with paid internships, shared housing, year-round training and professional development opportunities and access to a network of tech mentors who are deeply invested in their professional success.

In this, its third summer, the program has expanded into North Carolina’s Research Triangle, an area anchored by three major research universities and home to one of the largest research and development parks in the world. Companies including Optum, NetApp, McClatchy, Fidelity Investments, Cisco, Sensel, Quantworx, Lucid Dream, IBM, Blur Product Development, Duke Office of Information Technology and Adwerx employ the 19 scholars who live together in downtown Durham.

Wilkinson said it was helpful to go home and talk to her peers at the end of the day, and realize that everyone was having the same experience.

“It’s been fabulous, honestly,” she said.

Her friend and fellow DTech Scholar Joanna Li said that the built-in support network afforded by that shared space was the biggest reason she applied to the program.

"I never really realized that the field was so male-dominated until I got to my first high school computer science class.”

Growing up, she was really into computer games, said Li. “That’s how I got into computer science—making my own games. I never really realized that the field was so male-dominated until I got to my first high school computer science class,” she said. “Out of 25 people, there were only two girls in the class. The boys didn’t want to talk to me, so I sat by myself.”

Regardless of her feelings of isolation, Li clung to what she loved. Now a rising junior, she has made the shift to major in electrical and computer engineering, and has discovered in the DTech program the community she was lacking.

“I’ve just never had a close circle of women friends,” said Li. “I love it. We can talk about anything.”

“Anything” includes some of the pervasive problems facing women in tech—like being judged as unreliable because you’re female, or being steered into project management roles when you’re a serious developer.

In these situations, having access to female industry leaders and experienced mentors who can help the women realize their full potential is critical for their future success in tech, according to DTech Executive Director Monica Jenkins.

Both Li and Wilkinson said they intend to head west for next summer’s internships, to explore more of what the tech sector has to offer before they graduate. Li has her sights set on Seattle, and Wilkinson wants to see what it’s like to work at a large Silicon Valley company.

To date, every graduate of the DTech program has continued on the path to a tech career.

“We are elated that the students who have participated in DTech have all gone into industry positions or graduate school in technology,” said Shaundra Daily, associate professor of the practice in electrical and computer engineering and faculty director of the DTech program. “We believe this reinforces that our strategies of mentorship, community and skills-based training support young women in gaining the confidence and experience necessary to be successful after they graduate.”

For the remainder of this summer’s internship, though, Wilkinson will continue to focus on developing a virtual reality experience for hiring managers and leadership teams, in which participants are challenged to recognize and respond to instances of preferential treatment or unfair advantage in the workplace.

That’s something women in tech experience all the time—but Wilkinson’s involvement with DTech may help herto overcome it in the future.