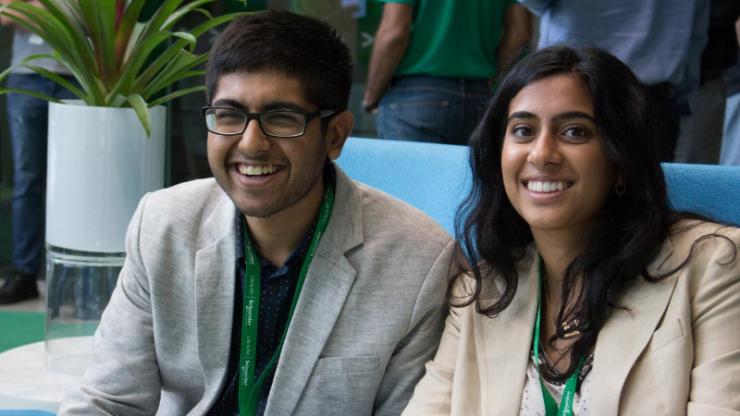 A Duke University undergraduate team has taken top honors in the North American division of Schneider Electric’s 2017 Go Green in the City case competition, which focuses on sustainable energy approaches in urban environments.

In October, rising juniors Ankit Rastogi and Zui Dighe will head to Paris to compete with 11 other teams from across the world for the international prize.

The Schneider Electric case competition, now in its seventh year, invites student teams across the world to submit brief statements proposing solutions to one of four energy management case challenges. With each round of the competition, the initial pool of participants (more than 1,900 teams) narrows and continuing teams are asked to provide more detail about their solutions.

Rastogi and Dighe chose to respond to the “strategy and technology” challenge statement, which addressed how the energy industry can better use up-and-coming technologies (IoT, cloud-based, etc.) to collect, analyze, and base decisions on data.

Their solution is a remote monitoring system that leverages cloud-based analytics to determine the best renewable energy option for a given community.

“In many places, funds for energy development exist, but there’s a lack of data to inform action. Our platform can be used to collect, analyze, and view data about energy access, environmental factors, and other information—and to identify what will work best in that situation,” explains Rastogi, a mechanical engineering major and electrical and computer engineering minor. “This data will be used to drive decisions regarding which source of clean energy best meets a community's energy needs and is affordable.”

For the semifinals in Boston, the Duke team had to prepare an 800-word summary, a presentation, and a short video explaining their solution and its potential impact. Each of the seven semifinalist teams was assigned a Schneider Electric mentor; Dighe and Rastogi were paired with Dina Yorke, North American Director of Global Diversity and Inclusion.

“This competition has required Ankit and me to really drill down on the technology,” says Dighe, a biomedical engineering major and computer science minor. “But at the same time, all along the way, we’ve really tried to keep people the main focus. We want our system to yield solutions that people want and that are tailored to their needs—and that means accounting for human and business factors. Our Schneider mentor helped us continue to address diversity and inclusion.”

In Paris, the finalist teams will meet with top Schneider Electric executives, offering additional detail about their solution and what its successful rollout would look like. Winners of the international prize will have the opportunity to travel to any two company locations to begin implementing their solution. The winning team will also receive job offers from Schneider Electric.

Dighe and Rastogi’s success did not emerge in a vacuum but in the context of Duke’s investment in a vibrant interdisciplinary energy community with nearly 1.4K students enrolled in 57 energy courses in 2016-2017. More than 100 faculty conduct energy research, and the university is home to seven energy degree programs and certificates. The Duke University Energy Initiative acts as an interdisciplinary hub for energy education, research, and engagement across the university’s schools.

One growing focus of Duke’s energy work is the challenge of providing energy access across the globe: worldwide, 1.2 billion people lack access to electricity and about one billion more have unreliable access.

For their part, Rastogi and Dighe are quick to note that, while they are proud of what they’re developing for the Schneider competition, this isn’t just an isolated project. “This is actually the quintessential Duke story,” Rastogi says. “There’s such a strong culture here of taking action on academic research—and the University offers the infrastructure to support that. As Duke students, we have been able to tap all these different nodes on campus, finding advice and resources to develop something really innovative.”

Dighe and Rastogi trace their own energy management solution back to a 2015-2016 Bass Connections in Energy team. Led by Jim Rogers (former Duke Energy CEO, author of Lighting the World, and Rubenstein Fellow) and Tim Profeta (director of the Nicholas Institute for Environmental Policy Solutions), the Bass Connections team designed student projects focused on off-grid electricity access, which were then funded through Duke Engage.

“The goal was to create impactful energy access projects that were designed in iterative ways, to allow Duke students and researchers to make progress with partner organizations over time,” explains Profeta. “That summer, four Duke undergraduates were able to take those ideas and run with them, via two projects in Peru and Indonesia.”

One project partnered with WindAid, a nonprofit based in Trujillo, Peru, where students helped to build wind turbines for distribution to communities in need of electricity. Afterward, the students moved to Playa Blanca, a small fishing village, where they assessed the impact of the wind turbines while engaging with the community to educate residents on the importance of the turbines.

A second project took place in Kamanggih, Indonesia, where students partnered with Institut Bisnis dan Ekonomi Kerakyatan (IBEKA) to complete an assessment of an electrification project.

“When students came back to campus after that first summer in Peru and Indonesia, they were so inspired, and a group of us just organically began to connect, initially sharing information and ideas via Slack,” recalls Leighanne Oh (BSE’15, MS’17), a member of the original Bass Connections team who encouraged Dighe and Rastogi to enter the competition.

“Over the course of the year, we met more students who were interested in opportunities for action,” recalls Oh. The informal network eventually included 12-15 students who now refer to their group as EnergyX. This summer, 2 students returned to Peru to continue the project there with funding from Duke Engage, and rising senior Tyler Wakefield is extending the work in Indonesia with support from the Nicholas Institute and the Sanford School of Public Policy.

“All the other EnergyX students have helped us find our path as we’ve gone through the stages of this competition,” Rastogi notes. “The students who worked in Peru and Indonesia—Aashna Agarwal, Conor Guest, Katherine Guo, Danielle Holt, and Tyler Wakefield—shared data and offered insights that helped us think about how to integrate the technology to serve the community. And so many others—including graduate students like Leighanne—have also been invaluable resources, both on the technical and social aspects of what we’re doing.”

And of course, Dighe points out, many Duke faculty have played a role. “Tim Profeta and Jim Rogers have been so influential and inspirational. Even faculty members whoseresearch doesn’t focus on energy access have taught us things we’ve been able to able to transfer,” says Dighe, mentioning the influence of biomedical engineering professor Mark Palmeri.

Palmeri helped Rastogi and Dighe learn more about Particle Electron microcontrollers, a technology that plays a critical role in their solution. Duke students and researchers have been using the same technology for a vaccine tracking project (via a biomedical engineeringcourse), energy management of a solar-paneled health clinic (via Duke Engineers for International Development), and wind turbine performance monitoring at the DukeEngage project in Peru.

Oh says watching this team makes her think back to the 2015-2016 Bass Connections project led by Rogers and Profeta.

“Part of the project involved identifying and analyzing schools at the forefront of advancing energy access solutions,” Oh recalls. “Most were strong in either research or engagement but not both. We didn’t see a high level of cooperation between undergraduate and graduate students at any of the schools. I think Duke is becoming a place where a student can come in at any level, with any major or degree concentration, and contribute to meaningful progress on energy access.”

New funds will advance that trajectory. In late 2016, Duke University received $2.25 million in funding for a university-wide energy access project, including a $1.5 million gift from Jim and his wife M.A. Rogers as well as $750,000 in matching funds from the Bass Connections Challenge. Key partners in the project include Bass Connections, the Energy Initiative, the Nicholas Institute, Nicholas School of the Environment, and Sanford School of Public Policy.

The new funds represent initial support for a long-term, sustainable focus at Duke on the challenge of access and transitions to sustainable energy for low- and middle-income countries around the world.

The project will build on a range of recent developments in energy access at Duke:

“I’m so proud of Ankit and Zui,” says Profeta, who is currently leading a search for a director for the new energy access project. “And it’s downright inspiring to see how so many within the Duke community are galvanizing to address a critical global challenge. I look forward to what’s next—for Ankit and Zui in Paris and also for Duke’s broader energy community and its impact.”

Are you a Duke student interested in energy? Sign up for regular updates from the Energy Initiative on energy news, events, and competition opportunities at Duke and beyond. You might also want to learn more about Duke student energy organizations, including EnergyX.

Are you an alum or energy professional who seeks to connect with Duke students? Contact Stacy Peterson. (Hope you’ll join our email list, too!)