This summer, two Code+ teams sent visitors to Madagascar and Cameron Stadium, with the help of augmented reality 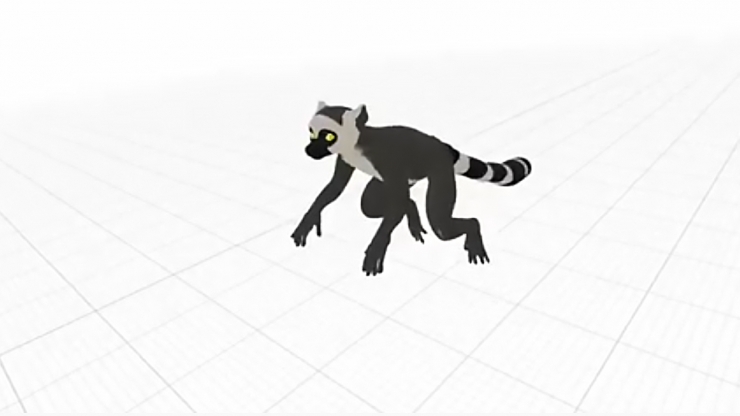 It’s been months since the Duke Basketball Museum welcomed fans through its doors, and months since a Duke Lemur Center tour guide showed a ring-tailed lemur to an excited kid. It may be many more months until these spaces reopen to the public. But thanks to Duke’s Code+ program and its ambitious and hardworking students, both spaces may be able to offer a new kind of access to visitors in the future—through augmented reality.

Code+ is a 10-week program for undergraduate students, run by Duke’s Office of Information Technology (OIT). Code+ focuses on projects in software and product development, and project leads are professional IT developers like Hugh Thomas, an OIT consultant and adjunct faculty member who mentored two teams incorporating augmented reality into their apps this summer.

Both teams knocked it out of the park.

“It’s almost frightening how talented everybody is,” said Ryan Craig, the Duke Athletics director of digital strategy, at the final presentation of the Code+ team that partnered with his unit to develop an app for the Duke Basketball Museum.

Using the app, Duke Basketball Museum visitors can step into giant basketball shoes, shoot hoops virtually, and scan their environment to search for objects that have additional information attached.

Using the app, Duke Basketball Museum visitors can step into giant basketball shoes, shoot hoops virtually, and scan their environment to search for objects that have additional information attached—a static photo of a game-winning shot might trigger a video highlight reel to play on top of it, for example. In the future, when the museum reopens, the team will be able to set jerseys and trophies as triggers that recap iconic moments in Duke basketball history.

Users can even explore Cameron Indoor Stadium without being physically being present—a very helpful feature in the era of COVID-19 closures. To accomplish this, the team first created a large spherical framework around the user, then added images to the inside of the sphere to make them feel like they were right in the middle of the action.

The Code+ team working with the Duke Lemur Center took a similar approach, surrounding its users with flora and fauna native to Madagascar, where lemurs are found in the wild. And, because lemurs themselves can be shy and difficult to spot, the team added an AR ring-tailed lemur that leaps across the screen. Since no prepackaged animations of lemurs were available, the team made its animation from scratch, creating the lemur’s skeleton, mapping its range of motion, and using a process called UV mapping—pulling all the layers apart and painstakingly hand-coloring each in Photoshop before packaging them together again—to give it a lifelike appearance.

The Duke Lemur Center team made its animation from scratch, creating the lemur’s skeleton, mapping its range of motion, and using a process called UV mapping—pulling all the layers apart and painstakingly hand-coloring each in Photoshop before packaging them together again—to give it a lifelike appearance.

“Getting into the world of augmented reality, understanding the new set of tools and the pipeline of software required to create the assets for this application, was a huge part of the work the students did this summer,” said Thomas.

Both AR teams met daily in a single Zoom room and were able to share what they were learning, speeding the process for one another. They were also able to tap into the expertise of Duke electrical and computer engineering (ECE) faculty member Maria Gorlatova and PhD student Tim Scargill, who work on augmented reality applications.

“Throughout the process we worked really closely with the ECE department—Maria and Tim provided us with a lot of material and helpful information in creating a lot of the AR content,” said Ryleigh Byrne ECE/CS ‘23. Scargill shared some hard-to-find assets—a 3D model of a map of Madagascar, as well as some lemur sound effects— that the team incorporated into its augmented reality landscape feature. Gorlatova offered her advice and thoughts on the field, as well.  “Maria was a great support and hosted a coffee chat with the girls on our team and the augmented reality basketball museum team,” said Byrne. “She provided us with insight into her career and research in engineering and computer science, as well.”

Craig said that Duke Athletics plans to integrate parts of the Duke Basketball Museum app into its existing platform in the future. “I’m excited about what this could bring to our official athletics platform, and to our fans,” he said. His sentiment was echoed by the Duke Lemur Center’s Director of Research, Erin Ehmke. “The potential for what could be provided this way is huge,” she said.