Longtime faculty member recognized for sustained contributions to the methods, tools and education in the reliability assessment of hardware-software systems 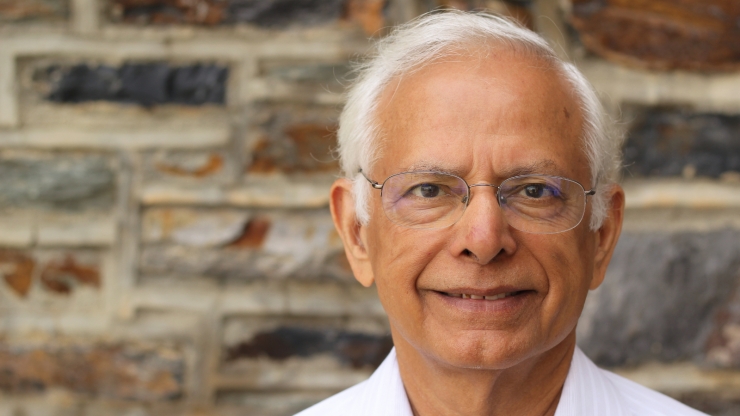 Kishor Trivedi, the Hudson Distinguished Professor of Electrical and Computer Engineering at Duke University, has been the recipient of the Institute of Electrical and Electronics Engineers (IEEE) Reliability Society’s Lifetime Achievement Award. One of the highest recognitions that a society of the IEEE can bestow, the award was bestowed to Trivedi in recognition of his “sustained contributions to the methods, tools and education in the reliability assessment of hardware-software systems.”

For the past 45 years, Trivedi has been a fixture at Duke, first in the computer science department before moving to the electrical and computer engineering department in 1991. Asked to teach a course on Probability for Computer Science and Engineering when he first arrived on campus, he soon discovered that no textbook for the subject existed. So he wrote his own.

Probability and Statistics with Reliability, Queuing and Computer Science Applications was published in 1982, followed by a full and complete revision in 2002 and a comprehensive manual containing 300 problem solutions soon after. That textbook tackled a large swath of territory on a fairly basic level; its revision remains widely used today.

In further evidence of the lasting importance of Trivedi’s contributions, he was recently given a Test of Time Award at the 2020 IEEE/IFIP International Conference on Dependable Systems and Networks for research carefully classifying different types of software faults in JPL/NASA missions. These finding have led to a significant amount of research and a novel way to develop fault-tolerant software based on what is now known as environmental diversity as opposed to the traditional design diversity. Two of his papers were also recently recognized as some of the most influential work in the past 30 years of the International Symposium on Software Reliability Engineering (ISSRE): “Analysis of software rejuvenation using Markov Regenerative Stochastic Petri Net,” 1995, and “A methodology for detection and estimation of software aging,” 1998.

Trivedi is a Life Fellow of the IEEE and a Golden Core Member of the IEEE Computer Society. He is the recipient of IEEE Computer Society’s Technical Achievement Award for his research on software aging and rejuvenation. He was recently specially appointed a professor at Hiroshima University, where he is working with colleagues on uncertainty propagation through dependability models.

At the IEEE Reliability Society’s Annual Reliability, Availability and Maintainability Symposium (RAMS) 2021, besides the Lifetime Achievement Award, Trivedi will also receive the Alan O. Plait Award for Tutorial Excellence for his tutorial presented at RAMS 2020. A special one-day workshop will also be held in Trivedi’s honor at RAMS 2021.