An Unintentional Work of Art

When Duke Engineers went to 3D print an artificial hawk’s nest to hide drone surveillance equipment, the results were more colorful than expected 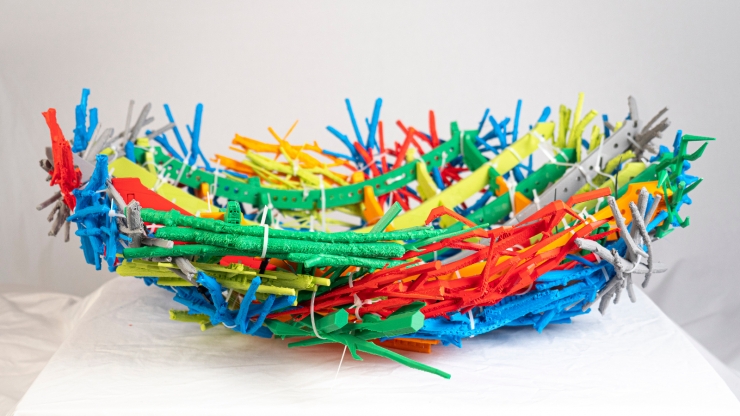 When a large fake hawk

When Misheel Sodgerel set out to 3D print an enormous replica of a hawk’s nest, she was focused on fulfilling the engineering criteria required to conceal drone detection equipment. She didn’t intend to create a unique piece of art.

“Because COVID has made everything on campus so weird, Misheel had to make the nest out of a hodgepodge of pieces printed with various colors,” said Missy Cummings, professor of electrical and computer engineering at Duke University. “When she finished it, I was struck by how the random components brought together ended up combining into something that I think is so beautiful that I almost wish she didn’t have to paint it.”

The story of Misheel and the amazing technicolor hawk’s nest began back in 2017 when Cummings and collaborators at Clemson University secured a grant to explore passive, inexpensive solutions for detecting and deterring unwanted drones. While the original grant included partners such as the Sarah P. Duke Gardens and the Durham Bulls, the project has since expanded to additional spaces including state prisons and Cary’s Koka Booth Amphitheatre.

Over the past three years, Cummings and her students have engineered an alerting system that uses microphones, thermal cameras and RF detectors to spot unwanted drones and the people flying them. It primarily consists of a microphone connected to a Raspberry Pi—a simple, inexpensive computer board originally developed to teach basic programming—a data server and a smart phone to run an associated app, all costing less than $1,000 total. 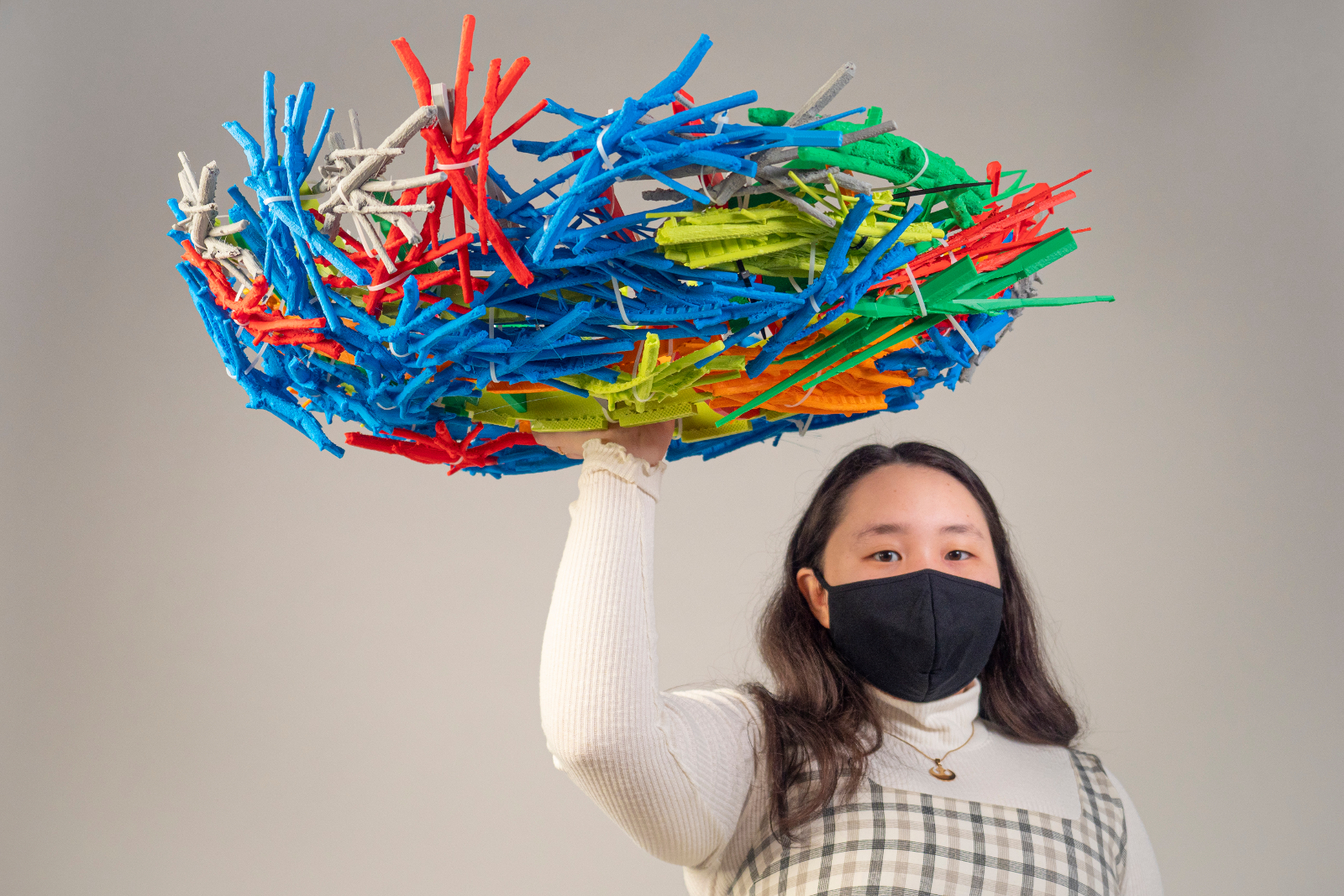 “It’s the definition of a team project,” said Cummings. “The Clemson landscape architects did a fantastic job designing a gorgeous nest. It really is a piece of art. Then it was our job to reengineer that nest to fit the needs of the field that we’ve discovered. But we didn’t expect to come out with new art.”

The engineering team began their engineering process by scanning many of the branches used in the original nest. They then cut the layers of branches from two down to one, and made some twigs hollow and others one-sided to save weight. The final design was intended to be 3D printed in dozens of pieces and snapped together by hand.

But when Sodgerel set out to actually print it, there weren’t enough printers filled with the same color to make the nest uniform. Because the nest was going to be painted over anyway, Sodgerel decided to go ahead and just print all the pieces out of whatever colors were available at the time.

Now that the nest is printed and painted, it’s ready for installation. Cummings and her team plan on testing the nest first on Duke’s campus. But it’s not the only piece of the puzzle that needs to blend in and stand up to the environment. 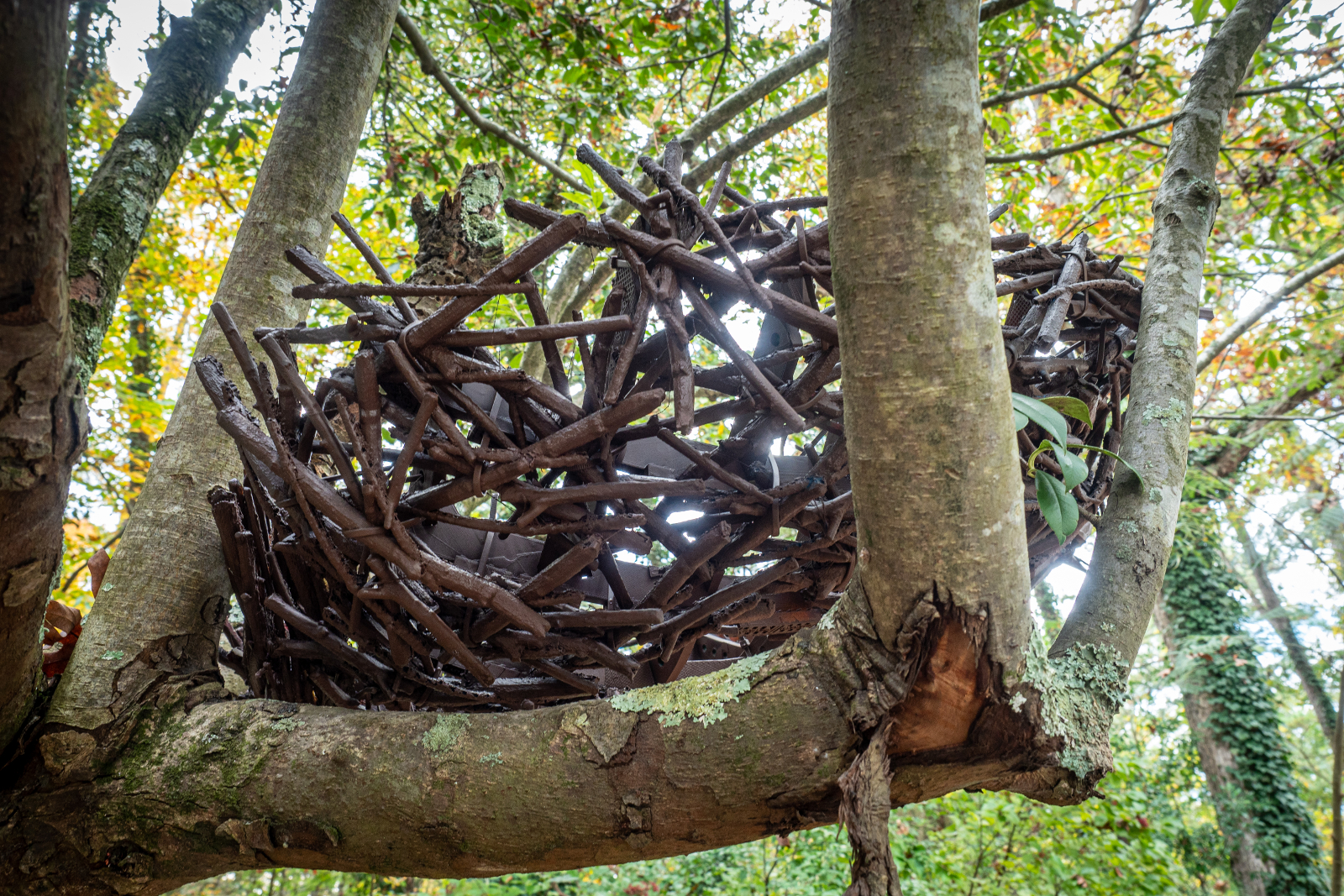 The drone detection equipment is also housed by a protective box that sits within the camouflaging nest. In its first design iteration, the box’s holes were too large, allowing wild animals to move in and make it their home. The second version had smaller holes that kept the animals out and, Cummings hoped, would also help keep moisture out.

“We thought we had a great design and installed it for testing at Koka Booth Amphitheater,” said Cummings. “But we soon found out that it wasn’t hurricane-proof. Hopefully with the new nest and a new box we’ll hit on a winning combination.”

Due to issues related to the COVID-19 pandemic, plans for potentially using the nest and equipment in the Sarah P. Duke Gardens is on hold. But Cummings says that not only will the nest be available if the venue decides to try it out, the 3D CAD model is freely available to anyone who might want to use and modify the underlying design to meet their own unique requirements.