Vahid Tarokh: Turning Patterns in Data into Products and Predictions 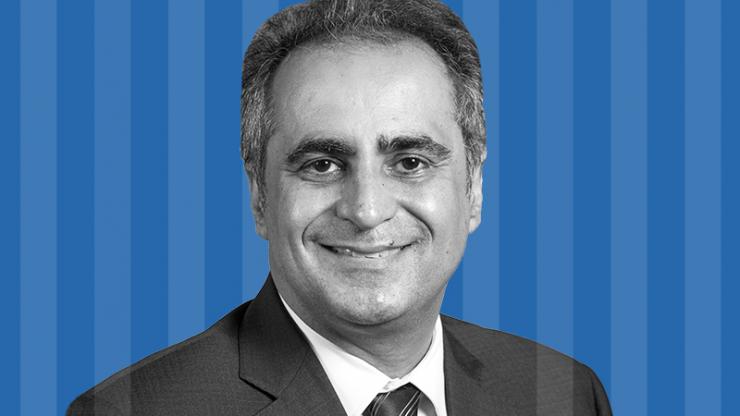 Vahid Tarokh will join the faculty of Duke University’s Pratt School of Engineering as the Rhodes Family Professor of Electrical and Computer Engineering in January 2018. One of the world’s most cited researchers in computer science, Tarokh is known for his singular contributions to signal processing and current work to create new methods for modeling and making predictions from small amounts of data.

“Most of my research has been about finding ways of discovering, creating or hiding patterns in a variety of signals and systems,” said Tarokh, who joins Duke from his current position as Perkins Professor of Applied Mathematics and Vinton Hayes Senior Research Fellow of Electrical Engineering at Harvard University. “Sometimes the aim is to improve things like reception quality--other times we look at patterns to improve modeling, detection and prediction for various applications. Occasionally, we have even thought about ways to hide a pattern, for example, from an adversary."

While working for AT&T Labs in the late 1990s, Tarokh helped invent the algorithms called space-time codes that most modern cellular phones use to transmit data. The technique sends several data streams of information simultaneously and combines the segments of received signal in an optimal way to provide signal redundancy. These space-time codes achieved significant error rate improvements over single-antenna systems and have been incorporated in a broad range of wireless standards.

After moving to the Massachusetts Institute of Technology in 2000 and Harvard University in 2002, Tarokh did early foundational work on distributed communications, spectrum sharing and cognitive radios. Cognitive radios are now allowed by the FCC for sharing the spectrum in various bands. He later became interested in researching various areas of signal processing and its applications to radar, interferometry and biology. Some of his projects included the development of "smart" shoe insoles to detect falls in the elderly, seizure prediction tools, systems to detect masses of tissue within the human body and environmentally sustainable communications systems.

"I was very impressed by the faculty that I met, who are intellectually outstanding and truly collegial,” said Tarokh. “I was also impressed by the leadership. Great leaders are hard to find, and kudos to the people who put this amazing team together."

As Tarokh moves to Duke, he plans to use the interdisciplinary opportunities for collaboration provided by the Information Initiative at Duke (iiD) and the Duke Quantitative Initiative to pursue new approaches to getting the most out of small sets of data. For example, he currently has projects focused on security for the Internet of Things with Robert Calderbank, director of the iiD and professor of electrical and computer engineering at Duke, and predicting events from small amounts of data, such as determining how different people will respond after exposure to certain viruses, with Ricardo Henao, assistant research professor of electrical and computer engineering and assistant professor of biostatistics and bioinformatics.

“I believe that 50 years from now, people may think of our era as golden times,” said Tarokh. “The tools we are inventing now may enable new, faster and semi-automated methods of scientific discovery. This, in turn, might further amplify the pace of progress and significantly impact various areas of health, science and technology.”

Tarokh’s move to Duke will reunite him with his friend and mentor Calderbank, who was formerly director of the Information Sciences Research Center at AT&T Labs and worked with Tarokh on developing the space-time codes. Besides having faith in Calderbank’s vision for his growing initiative, Tarokh cited the leadership and opportunities for collaboration at Duke engineering and sciences with excellent colleagues as the reasons for his move.

“I was very impressed by the faculty that I met, who are intellectually outstanding and truly collegial,” said Tarokh. “I was also impressed by the leadership. Great leaders are hard to find, and kudos to the people who put this amazing team together.”

Besides being an interdisciplinary researcher whose work can be applied to several departments across the university, Duke is also gaining an accomplished teacher. Having hosted local high school students in his laboratory through a program sponsored by the U.S. Army Research Office, Tarokh works diligently to pay forward the benefits he has reaped by having excellent mentors throughout his own career.

“Filling the shoes of these mentors is very hard, but I can try to get young people interested in science at an early stage of their careers,” said Tarokh. “Plus, undergraduate and graduate students often offer their own original views and surprise me with their novel ideas. I continue to be inspired by the speed with which they can absorb new concepts and their thirst for learning, their idealism, their level of energy and their originality.”