What Happens When a Dolphin Holds Its Breath? 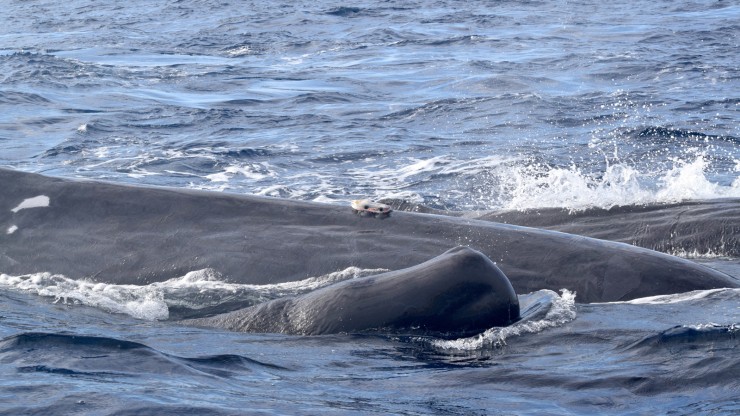 A tagged sperm whale mother with her calf, in the offshore waters of the Santos Basin, Brazil. Photo: Dave Haas, under IBAMA permit

When dolphins dive deep to search for prey, their respiration stops. Their heartbeat slows. Yet they are still able to power all of the functions they need to hunt. No one is entirely sure how they do it, because no one has ever been able to measure their blood oxygenation levels during these deep dives. It's a logistically complex challenge; how do you attach a sensor to a massive sea-dwelling creature without doing harm? The rudimentary data that researchers have gathered so far has come from heart rate monitors bound to dolphins' bodies with thick, wide neoprene straps—dolphin girdles, essentially.

This spring, Duke researchers tackled that challenge, designing sensors that they hoped would be able to better collect more of that vital information. The sensors work in much the same way that a pulse oximeter does—by reflecting light through the dermis to the blood-rich tissue beneath, and back to a photodetector sitting on the surface of the skin. The sensor incorporates a saltwater switch that tells the device when to start recording data, when to stop, and when to wirelessly communicate the resulting information back to the researchers. The sensor must be lightweight, power-efficient, and small enough to fit wholly inside a saucer-sized suction cup attached to an animal's body.

Here's the really impressive part: these researchers weren't faculty. They were undergraduate students in a Duke Electrical and Computer Engineering design course, which synthesizes foundational ECE knowledge and skills through a single, unique sensor interface and design challenge.

Nan Jokerst, the J. A. Jones Professor of Electrical and Computer Engineering at Duke, and Associate Professor Martin Brooke have co-taught this course together for 23 years, continually refining the syllabus and introducing new design themes and challenges. This spring, they collaborated with Dave Haas, a Duke PhD candidate in Marine Science and Conservation working under Professor Doug Nowacek, the Randolph K. Repass and Sally-Christine Rodgers University Associate Professor of Conservation Technology. Haas' research focuses on measuring cardiac variation and blood oxygen saturation in cetaceans—aquatic mammals including dolphins, whales and porpoises. Haas volunteered as a teaching assistant in the course, and is using the students' work to inform his own cetacean physiology sensor design, which also incorporates pressure sensors and accelerometers that convey information about the animal's depth and body orientation—like whether it's moving toward food, avoiding predators, or just cruising.

"I've leapfrogged ahead because of their work," said Haas. "I could easily take their bio-optical sensor designs, integrate it with my tag system and my data collection system, and actually use that on live dolphins."

As Haas leverages the work of the students, so are they able to leverage the unique resources of Duke's many collaborators—like UNC-Wilmington's samples of dolphin skin, stored in a subzero freezer in Duke's Shared Materials Instrumentation Facility.

“When the students want to run tests, Dave [Haas] will bring the frozen dolphin tissue samples out and defrost a section, and then they can run the test on the actual mammalian tissue. They’re looking at things like signal-to-noise ratio, and trying to determine whether enough light gets transmitted through this pretty thick dolphin skin, so that we can see the reflected light coming back at our photodetector,” said Jokerst.

The students worked in teams to prototype their designs, each team competing to build the most cost-effective sensor with the lowest energy consumption, smallest footprint and best performance. They were faced with real-world production challenges, too: lead times for acquiring parts that didn’t work with the development schedule, vendors that occasionally misplaced orders, and a rigorous schedule of weekly presentations to upper management—in this case, their instructors.

Though the coursework was demanding, both teams exceeded expectations, earning perfect scores, plus bonus points, on their sensors’ design and performance at their final demonstration.

Kimberly Eddleman, ECE ’18, credited the weekly presentations for keeping the groups motivated, but also noted that Haas’s participation was incredibly valuable to both teams throughout the process. “It probably would have taken more time and been more stressful without having an amazing mentor like Dave,” she said. “We could bounce ideas off of him, and  ask him questions that we couldn’t find the answers to online.”