After spending nearly five years as Duke’s first Defense Advanced Research Projects Agency (DARPA) program manager, Jeffrey Krolik, professor of electrical and computer engineering, talks about the position, the projects he managed and what he took away from the experience 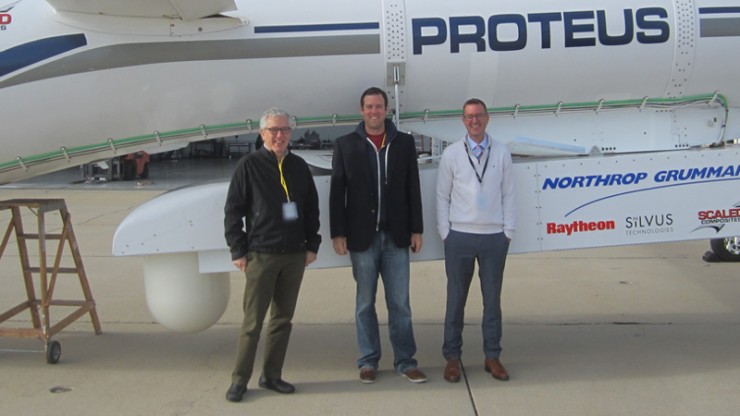 How did you become a DARPA project manager?

I’ve been engaged in DARPA projects throughout my career—most of them focused on sonar and radar signal processing—and so people who knew me there asked me about coming to DARPA to be a program manager. At this stage in my career, I thought it would be a way to have a greater impact on solutions to some important national defense challenges, so I expressed interest and I was selected. The Dean and the ECE Chair at the time agreed that it would be very worthwhile public service, so I was granted a government service leave from Duke to take the position.

I moved to Washington DC because my job involved constant interaction with industrial, government and military officials, often in secure facilities.

What exactly does it mean to be a DARPA program manager? 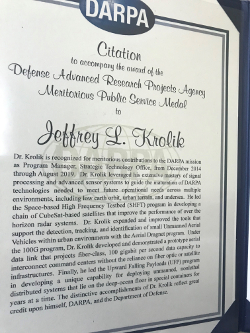 DARPA program managers are selected because they often bring new ideas to solve difficult defense-related problems. Almost everyone at DARPA is there for a limited term, typically three to five years, so in order to see results while you’re there, you feel pushed to have projects progress as fast as possible. Program managers develop ideas for projects with the help of experts all over the country and present them to the Director for approval.

One of the best things about being at DARPA is that virtually everyone you reach out to wants to help you develop ideas for projects. Once the project is approved, a solicitation is published and proposals from teams are evaluated based on formal selection criteria, often with an emphasis on the novelty of their solution. In the Strategic Technology Office of DARPA, where I was employed, the focus is on the development of large systems beyond fundamental research.

Because everyone at DARPA is there for a limited time, quite often the execution of a project extends beyond the tenure of the original program manager, so the management transitions to someone new. During my time at DARPA, I started four programs and took over two programs started by others. At one point, I was managing four projects at once, which was incredibly intense, especially since most involved field experiments executed by different teams.

What was the most interesting project you worked on?

One of the most interesting projects I initiated involved putting up a series of nanosatellites to improve the performance of over-the-horizon radar. Nanosatellites typically weigh less than 25 pounds and are measured in size by the number of four-inch “cubes” they occupy. Our so-called “CubeSats” were the first of their kind for this application and posed many unexpected challenges with respect to spacecraft attitude control. I attended the launch of our first spacecraft on a Minotaur rocket from Cape Canaveral which was very exciting. Watching a rocket launch is a lot more fun knowing that your payload is going into orbit! 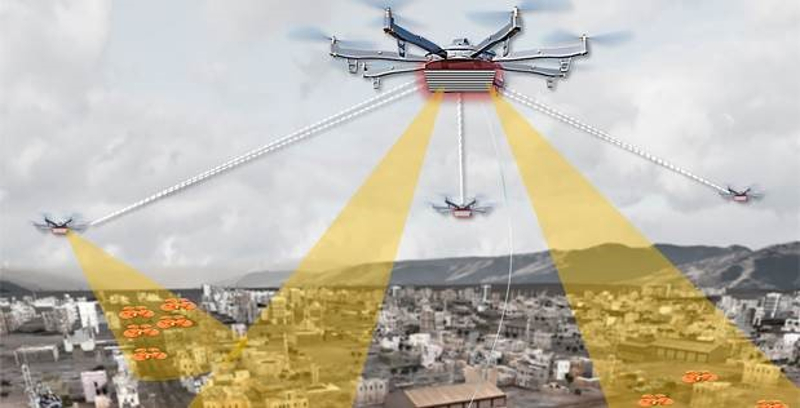 What would you say was the most successful program you pursued?

Probably the most successful program I managed was one that I finished but didn’t start. Its goal was to achieve wireless data transfer from an aircraft to a ground station at fiber-optic data rates, which are speeds of at least 10s of gigabits per second. Compared to the fastest commercial mobile wireless data rates of less than 100 megabits per second, that’s insanely fast. We easily broke the previous world record by demonstrating data transfers at more than 40 gigabits per second at distances greater than 30 km using large bandwidths at millimeter-wave frequencies, many bits per symbol, and multiple-input-multiple-output (MIMO) antennas and waveforms.

How about the most headache-inducing program? 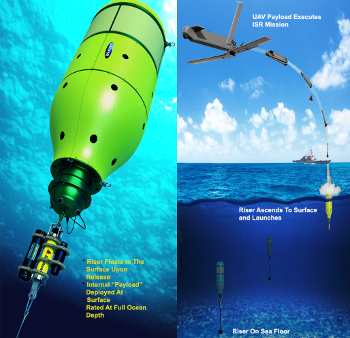 The most unusual program I managed had a goal to provide the US Navy with the ability to pre-position assets underwater.  For the assets to survive until needed, the idea was to store them at the bottom of the ocean in pressure vessels.  When needed, a command would be sent to release the pressure vessel, which would then float to the surface and deploy its payload.

Besides there being all kinds of issues with how to ensure the vessels could withstand the intense pressure at depths of over 4,000 meters and the challenges of communicating with it, we attracted some crazy media coverage.  The program also appeared to inspire an NCIS television series episode about “pre-positioned assets or PPA’s.” The TV script was a murder mystery involving deeply submerged Navy pressure vessels supposedly used to store illegal drugs! The fictional program was much more sensational than the real program.

What were your biggest takeaways from your time at DARPA?

I learned that there are a lot of very dedicated and talented people in the defense department and the military. Overall, I was very impressed by the professionalism of the people who choose to serve their country in this way.

I also learned to appreciate the importance of teams and what it takes to be both a good team leader and team member. As a program manager, I was responsible for program leadership and was also held accountable as a government team member. Developing complex new systems is hard. I found that just getting a lot of smart people together isn’t enough. They all must be able to work effectively together, which requires leadership and accountability.

What are your research plans now that you’re back at Duke, and did your time at DARPA influence them at all?

I’m hoping to branch out beyond traditional military applications of radar and sonar. In the last few years, new commercial millimeter-wave radar and acoustic sensor arrays have opened up a whole host of new sensing possibilities for signal processing research. Right now, we’re looking at everything from radar signal processing for human health assessment to sensor array processing for coherently combining a set of widely distributed microphones, e.g. in smart speakers, to improve speech processing in noisy environments. In addition, I look forward to initiating new collaborations and starting new projects with some of the great faculty we have at Pratt.