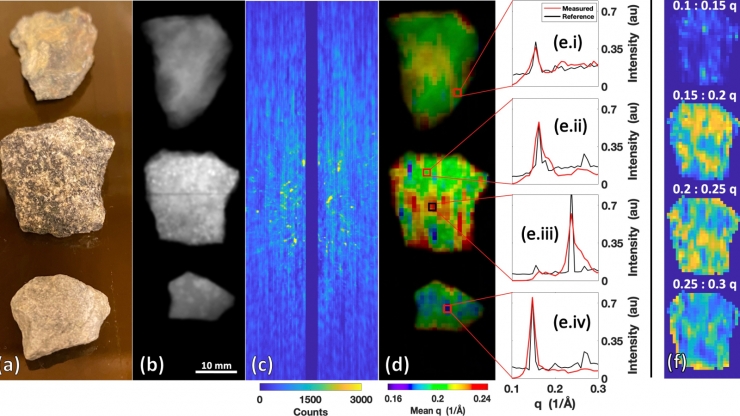 The new x-ray scanner can provide detailed information about the internal makeup of rocks, which could be useful for archaeologists studying fossils or miners making decisions about which ore to use in their extraction facilities.

Engineers at Duke University have demonstrated a prototype X-ray scanning machine that reveals not just the shape of an object but its molecular composition. With unprecedented resolution and accuracy, the technology could revolutionize a wide range of fields such as cancer surgery, pathology, drug inspection and geology.

Many of the ideas behind the prototype were originally conceived in the pursuit of performing better bomb detection for aviation security. In the new paper, published online May 19 in the journal Scientific Reports, the researchers adapted the technology for several targeted scientific and medical applications.

“Whether you’re trying to spot a bomb in a bag or a tumor in a body, the physics is more or less the same,” said Joel Greenberg, associate research professor of electrical and computer engineering and faculty of the medical physics program. “But from an engineering point of view, the constraints on the two are very different. We built this smaller, higher-resolution device to demonstrate that our approach could be used for a number of different applications.”

The technology is a hybrid X-ray system that combines conventional X-ray transmission radiography with X-ray diffraction tomography. The former involves measuring the X-rays that pass straight through an object. The latter involves gathering deflection angle and wavelength information from X-rays that have scattered (or bounced) off of an object, which provide a sort of “fingerprint” unique to that material’s atomic structure.

One of the hurdles to adopting this technology is that the scattered X-ray signal is typically very weak and complex. This results in very few X-rays reaching the detector with each image captured, which leads to long delays while the scanner gathers enough data for the job at hand. 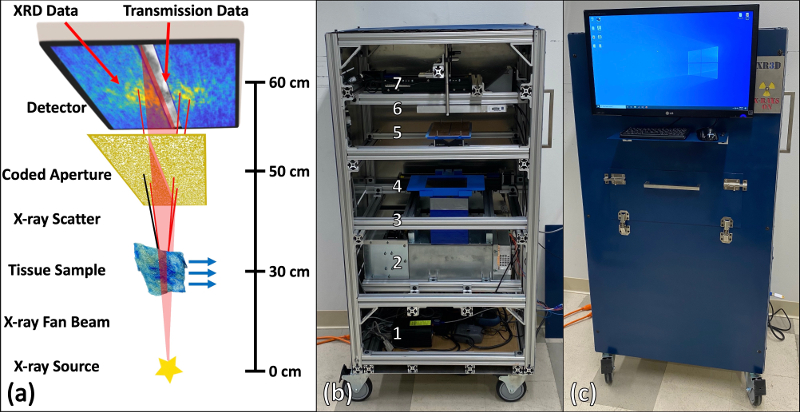 The Duke team’s approach uses a coded aperture, a sort of pierced shield that allows X-rays traveling at many different angles to pass through its holes. The trick is in knowing the exact pattern being used to block the X-rays, which a computer can then use to process the larger, more complex signal. This allows the researchers to gather enough deflected X-rays to ID the material in a shorter time span.

In the paper, the researchers developed a new method for creating high-quality, 3D coded apertures, designed a new machine end-to-end with a user interface and compact footprint, and built a prototype using off-the-shelf components regularly used in medical imaging.

“Security scanning systems have different goals than an oncology lab,” said Anuj Kapadia, who was an associate professor of radiology and faculty in Duke medical physics at the time of performing the research but is now at Oak Ridge National Laboratory. “Security systems need to peer through tens of centimeters of random objects in a matter of seconds, whereas our goal was to get a high-resolution image of a small, well-defined specimen with less of a time restraint.”

The biggest challenge tackled by the prototype scanner involved making accurate diagnoses of potentially cancerous tissues. Working with colleagues at Duke Health, the researchers scanned tissue lumpectomies before they were sent to the resident pathologists for their clinical workups. The scanner not only matched the clinical diagnosis accurately, but it also reliably distinguished between the subtypes of tissue in and around the cancerous tissue.

“Our eventual goal is to have one of these scanners in every operating room so that surgeons can get an instantaneous diagnosis as soon as the cancer is removed, and they can immediately check to see if any cancerous cells are present on the edges,” said Kapadia. “That way, if there’s any suspicion that they missed some of the cancer, they can immediately go back and get the rest.”

“While margins can often be evaluated by pathologists while the patient is still in the operating room, for tissues like breast, specimens removed at surgery require a 24-hour processing cycle before their margins can be properly assessed,” said Shannon McCall, associate professor of pathology, vice chair for translational research in the department of pathology, and director of the Duke BioRepository & Precision Pathology Center (Duke BRPC). “If this new instrument allowed us to accurately assess the margins of these types of tissues while the patient was still in the operating room, that would be fantastic. Women could potentially be spared additional surgical procedures.” 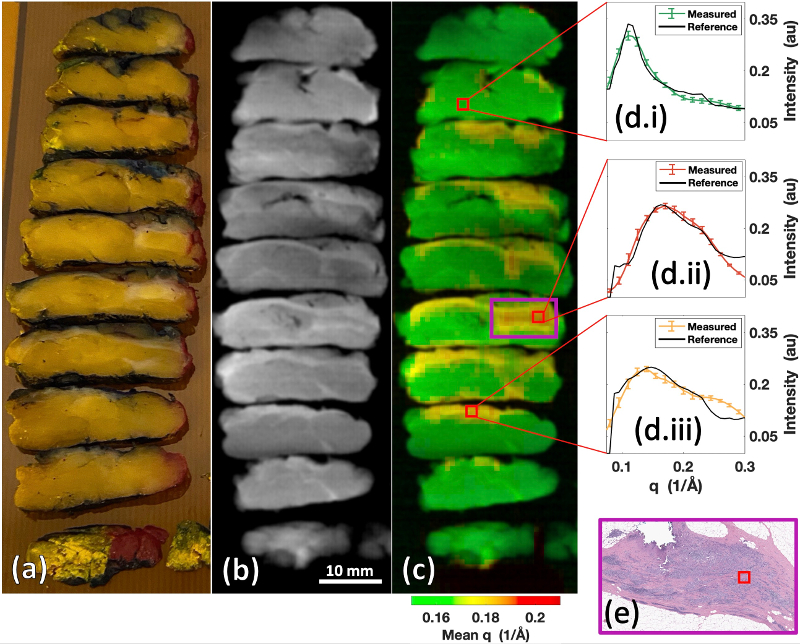 The researchers then showed that the scanner could provide a real-time analysis of pharmaceuticals. Not only could this help manufacturers ensure their product is reliable, but it could also be used by police forensics departments or public health campaigns to make sure people are not selling or overdosing on tainted drugs.

The scanner also proved capable of quickly analyzing rocks lent to them by an amateur collector, Greenberg’s nine-year-old daughter, Madelyn. Such analyses could be useful for archaeologists studying fossils or miners making decisions about which ore to use in their extraction facilities.

Moving forward, the research team has a grant from the National Institutes of Health to optimize the scanner for tissue samples. Quadridox Inc., which was founded by Greenberg and Kapadia along with colleagues Michael Gehm (Duke) and Amit Ashok (University of Arizona), is pursuing translating the technology into products that might instead be optimized for larger rocks, quicker pharmaceutical scans or biospecimen analyses.

“We built this scanner to show all of the different types of things that it could accomplish,” said Greenberg. “But a commercial machine for each application might have its own set of engineering variations, such as the way in which we make measurements, the choice of sensors or the architecture.”

“If you were going to design a projector, you would need to know if it was going to be used in a dark theater or in broad daylight. The specifications would be completely different,” added Kapadia. “Similarly here, our goal is to find many applications where these sorts of scans could be useful, and then engineer a variety of scanners to fit their specific needs.”