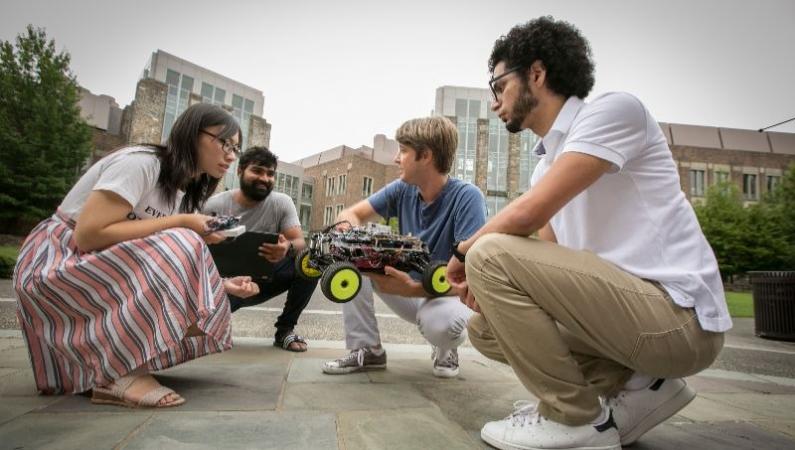 What were you doing before grad school?

I started out as an R&D engineer at Schneider Electric, a multinational organization, before I completely switched tracks to embedded software design and verification at Valeo. I'm always looking to learning something new, though, so I decided to pursue a master’s degree at the AUC while working as a freelance product designer with Orange Labs. That's where I designed my first commercial product. Creating new things is very exciting for me.

Then… why did you move across the world for a PhD?

All the positions I went for had to do with research and development. I wasn’t fulfilled, though. I think I want to retire from a teaching position, whether as a professor, or a trainer, or a teacher of some sort. At Duke, I have been a TA in two classes: Human-Robot Interaction and Formal Methods in Cyber-physical Systems, which I certainly enjoy.

My mentor during my undergraduate years was a professor named Yasser Shoukry. He’s a rising star in cyber-physical systems at the University of Maryland. Dr. Shoukry always took his time to explain a point or a concept; I owe to him that I care about teaching, and I care about the people I’m teaching.

Why did you choose Duke?

Duke also has the reputation of backing its students when it comes to funding, and of being eager to take risks and incubate new ideas.

First, Duke is a top-ranked school. And its location on the east coast couldn’t be better—the weather is nice! But, importantly, Duke also has the reputation of backing its students when it comes to funding, and of being eager to take risks and incubate new ideas. I was delighted to learn that one of the professors whose work I was following closely—Miroslav Pajic, who is my advisor now—was moving to Duke at the time I was applying. Not to mention Missy Cummings, who is an expert in human-robot interaction, was also at Duke. Coming into something new, working on new problems, starting a new lab, having access to the top scholars in the field... these are opportunities not to be missed.

What kind of work are you doing in the Cyber-physical Systems Lab?

Cyber-physical systems are those that integrate communications, electronics and mechanical equipment. In the lab we study these systems from a security perspective, creating systems that are secure against cyber attacks.

For example, the average modern car uses dozens of computers, which communicate through networks. Those networks are susceptible to malicious attacks that can compromise the car’s performanc—and more importnatly, the passengers' safety. Securing these systems in driverless cars is quite challenging, but it's of the utmost importance. I’m personally interested in understanding the impact of human presence on the security of unmanned vehicles. I'm currently working to design protocols for command and control systems, where a fleet of drones is supervised by a human operator.

Why is studying human-robot interaction important?

How do you divide responsibilities among a team of humans and robots? What protocols should be followed, defining who should do what, and how do you communicate them?

But how do you divide responsibilities among a team of humans and robots? What protocols should be followed, defining who should do what, and how do you communicate them?

Finding answers to these questions is a major part of my research. It may sound simple, but it's unbelievably complicated.

Do you enjoy working on these kinds of complicated problems?

Absolutely. I get bored easily, so studying topics across domains to solve problems in my research is something I really enjoy. I use both rigorous math and data collected from human experiments, like measurements of boredom and fatigue, to define and solve research questions. It's like developing a game where your opponent is the environment, which is unpredictable, or some hacker trying to get the system you're designing to fail. We develop the game, find strategies that allow us to win, and implement them in real life.

Do you work with other schools within Duke to get that data?

That’s a good question, and it relates to one of the reasons why I’m glad to be at Duke—I have access to the best people in the field. Our main collaborator is the Humans and Autonomy Lab, led by Missy Cummings. We conduct IRB-approved human experiments to gather data that helps us better understand interactions between humans and robots. No matter what behavior you expect to see, humans will always surprise you!

What’s a typical day at Duke?

I’m glad I’m here at Duke. I can’t imagine this environment or these resources exist anywhere else.

My day starts with a short walk around west campus, enjoying the gothic architecture and clearing up my mind. Then, you'll find me either working in the lab, attending a class or a talk, or mining the Perkins library for knowledge. Oftentimes you can hear Miroslav and I brainstorming ideas or debating whose idea is better—something he always encourages us to do so that we can get the most out of our meetings.

I’m glad I’m here at Duke. I can’t imagine this environment or these resources exist anywhere else.

Earn Your PhD at Duke 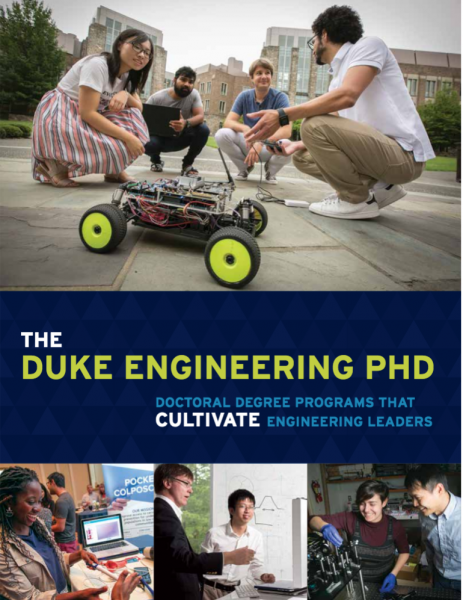