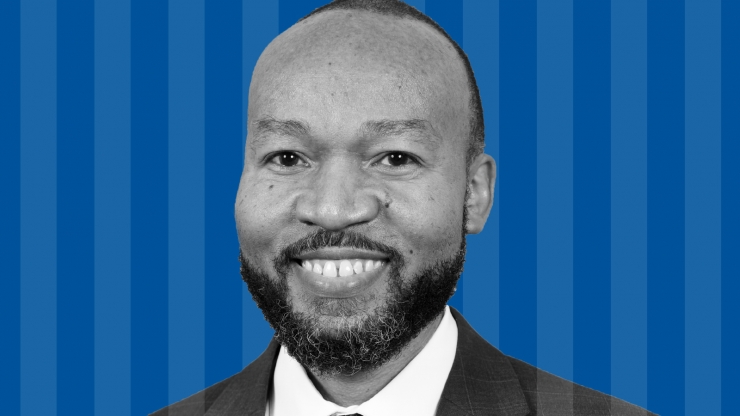 Christ Richmond will join the faculty of the Department of Electrical and Computer Engineering at Duke University beginning January 1, 2022. With decades of experience designing and testing new technologies and algorithms to improve wireless applications such as radar and communications, Richmond will join longtime colleagues at Duke in applying emerging techniques such as machine learning to the field.

After earning undergraduate degrees in electrical engineering at the University of Maryland at College Park and in mathematics at Bowie State University, Richmond completed master’s and doctorate programs at the Massachusetts Institute of Technology. For more than two decades, Richmond worked as a senior staff member with the Advanced Sensor Techniques Group at the MIT Lincoln Laboratory before joining the faculty at Arizona State University in 2017.

Through all of his work, Richmond has pushed the boundaries of what modern technology can do with electromagnetic and acoustic waves. While most people are more familiar with the spectrum of electromagnetic waves that we can see—visible light—other frequencies are used for a wide variety of purposes such as radio, radar, WiFi, Bluetooth, satellite communications, cellular telephones, 5G devices and more. If it sounds like a crowded space to be playing in, that’s because it is.

“Think of the electromagnetic spectrum as a parking lot and each of these frequency bands­­ as parking spaces,” said Richmond. “Just like real estate, certain spots are more attractive than others, and everybody wants the good ones.”

The agency that decides who gets what spaces is the Federal Communications Commission, or FCC. According to Richmond, the FCC has historically reserved the best spots for the military and for civilian organizations with important aims, like atmospheric observation. But a few decades ago, a large swath of these valuable frequencies were sold to private corporations on the promise that researchers would be able to figure out how to do more with less electromagnetic real estate.

“We need to figure out how to get all of these signals to dance together in a coordinated way without stepping on each other. This requires the radar talking with the satellite signals through computers and algorithms. But if we can get them to work together as an extension of each other, we might just be able to make both work better as a team than as individuals.”

Fast forward to today, and Richmond is one of the researchers still building those bridges. Along with colleagues Robert Calderbank, the Charles S. Sydnor Distinguished Professor of Computer Science and director of the Information Initiative at Duke, and Vahid Tarokh, the Rhodes Family Professor of Electrical and Computer Engineering, Richmond is working on a proposal that would let users of spectrum share the same frequency band, or perhaps even coexist simultaneously within the same band (or in the language of cars and parking spaces, these cars will share parking spaces, or perhaps even park on top of one another).

“We need to figure out how to get all of these signals to dance together in a coordinated way without stepping on each other,” said Richmond. “This requires the radar talking with the satellite signals through computers and algorithms. But if we can get them to work together as an extension of each other, we might just be able to make both work better as a team than as individuals.”

Richmond’s other primary line of research, which is also a collaboration with Calderbank and Tarokh, involves applying evolving machine learning techniques to wireless communications. The trio already has a running start. In October 2020, the team landed a five-year, $5 million grant from the Air Force to develop AI-informed communication and networking protocols fast and reliable enough to handle Air Force requirements.

To help explain their efforts in this arena, Richmond says to consider that all of today’s wireless communication algorithms are based on a model of how the waves should behave. As long as the signal is strong and the assumed model holds, then the technology can decipher the incoming data. But when the incoming waves no longer look as expected due to interference or degradation over time and space, the model breaks down and the signal is lost.

“We’re moving away from developing algorithms that are based on a model and instead are basing them on AI,” said Richmond. “These types of approaches rely on data rather than a model. So as long as you train it with enough data from a wide range of less-than-ideal scenarios, it can adapt itself to changes in the environment. The potential is really amazing.”

With strong collaborators at Duke and a multimillion-dollar center already in the works, it might only have been a question of when Richmond joined the faculty rather than if. In any case, Richmond says he is excited about the opportunities the move will create for him in a wide variety of topics.

“I’ve stayed in touch with lots of people now at Duke for a long time. They kept telling me that I ought to think about coming here too, and once I looked at what’s going on, it was very attractive in a lot of ways,” said Richmond. “I’ve been told the students are very good, so I’m excited about that. There’s also a lot of fantastic young faculty and I’m interested in a bunch of projects going on at the medical school too. I think the longer I’m here, the more I will find opportunities for new collaborations.”