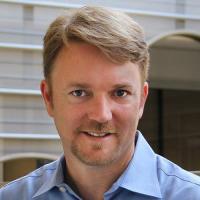 Henry D. Pfister received his Ph.D. in Electrical Engineering in 2003 from the University of California, San Diego and is currently a professor in the Electrical and Computer Engineering Department of Duke University with a secondary appointment in Mathematics.  Prior to that, he was an associate professor at Texas A&M University (2006-2014), a post-doctoral fellow at the École Polytechnique Fédérale de Lausanne (2005-2006), and a senior engineer at Qualcomm Corporate R&D in San Diego (2003-2004).  His current research interests include information theory, error-correcting codes, quantum computing, and machine learning.

He received the NSF Career Award in 2008 and a Texas A&M ECE Department Outstanding Professor Award in 2010.  He is a coauthor of the 2007 IEEE COMSOC best paper in Signal Processing and Coding for Data Storage and a coauthor of a 2016 Symposium on the Theory of Computing (STOC) best paper.  He has served the IEEE Information Theory Society as a member of the Board of Governors (2019-2022), an Associate Editor for the IEEE Transactions on Information Theory (2013-2016), and a Distinguished Lecturer (2015-2016).  He was also the General Chair of the 2016 North American School of Information Theory.