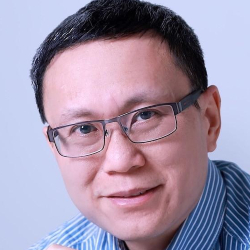 Professor of Electrical and Computer Engineering

Jian Pei joined Duke in July 2022. He is a leading researcher in the areas of data science, big data, data mining, and database systems. Pei's expertise is in developing effective and efficient data analysis techniques for novel data-intensive applications, and transferring these techniques to products and business practices.

He is one of the most-cited authors in data mining, database systems, and information retrieval. Since 2000, he has published a textbook, two monographs and over 270 research papers in refereed journals and conferences—which have been cited by more than 92,000 times in the literature.

His H-index is 86, according to Google Scholar. His research has generated impacts beyond academia—for example, his algorithms have been adopted by industry in production and popular open-source software suites.

Jian Pei’s professional leadership includes having served as the editor-in-chief of the IEEE Transactions of Knowledge and Data Engineering (TKDE), 2013-2016, and chair of the Special Interest Group on Knowledge Discovery in Data (SIGKDD) of the Association for Computing Machinery (ACM).