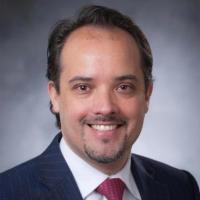 Dr. Medeiros joined Duke Ophthalmology as Professor in August 2017.  Prior to joining Duke, he was a full professor of ophthalmology the UCSD School of Medicine where he held the Ben and Wanda Hildyard Endowed Chair for Diseases of the Eye. He also served as medical director of the Hamilton Glaucoma Center, University of California San Diego and director of the Visual Performance Laboratory at UCSD.

His research focuses on the development of innovative methods to diagnose and detect glaucoma progression as well as on the assessment and prevention of functional impairment in the disease, the leading cause of blindness in the world. In his research, Dr. Medeiros evaluates the impact of eye diseases on activities of daily living, using innovative techniques such as virtual reality. His laboratory was the first to use virtual reality to predict a clinically relevant functional outcome in medicine. He has also concentrated on developing innovative brain-computer interfaces for objective and portable assessment of visual function in several diseases. His research has been funded by numerous federal and private grants. He is the principal investigator on a National Institutes of Health (NIH) R01 to evaluate functional impairment in glaucoma and on an NIH R21 for development of a new method for assessing functional loss in glaucoma.

He has been the recipient of numerous honors and awards including: the American Academy of Ophthalmology Senior Achievement Award, the Ronald Lowe Medal, South African Glaucoma Society Honorary Member, the World Glaucoma Association Research Award, Federal University of Sao Paulo Special Recognition Award, Iranian Society of Ophthalmology Recognition Award, University of Sao Paulo Award, Arno Habicht Award for Research Sciences, ARVO Foundation/Merck Innovative Ophthalmology Research Award, the American Glaucoma Society Mid-Career and Clinician-Scientist Awards, Best Doctors in America, among others. Most recently, he received the Moacyr Alvaro Gold Medal, the most prestigious award in ophthalmology in Latin America. Dr. Medeiros has given over 100 invited and keynote lectures throughout the world, including the David Worthen Memorial Lecture at the Johns Hopkins University, The Rich Lecture at the University of Alabama at Birmingham, the Federal University of Sao Paulo SIMASP Lecture, the MGS Allergan Research Lecture, President’s Lecture for the Optometric Glaucoma Society, Seoul National University Lecture, and others.

His research has been published in over 300 peer-reviewed publications including major ophthalmology journals, 40 book chapters and five books on the evaluation of the optic nerve, visual field, intraocular pressure, diagnosis and progression of glaucoma. His work has received over 11,000 citations with an h-index of 60, one of the highest in the field of Ophthalmology. As a result of his research productivity, Dr. Medeiros was named recently as one of the Top 5 Glaucoma Researchers in the World (Annals of Library and Information Studies and Expertscape). As a result of his scientific contributions, Dr. Medeiros had the honor of recently being selected to be the first scientist to have a profile featured by in Ophthalmology, the Journal of the American Academy of Ophthalmology and the main publication in the field.

Dr. Medeiros is an elected member of the prestigious Glaucoma Research Society, a restricted membership society for the Top 100 glaucoma researchers in the world. He currently serves as the vice-chair of the American Glaucoma Society (AGS) program committee. He was co-chair of the World Glaucoma Association Consensus Development Panels.  Dr. Medeiros has been a member of the editorial board for several journals, including the Journal of Glaucoma. He has trained numerous fellows and graduate students from many different parts of the world, including China, Taiwan, Germany, Japan, Holland, Italy, Thailand, Brazil, Argentina, Canada, United Kingdom and Australia.